- We’re seeing major volatility in the Yen (covered in 2nd point below). Be really careful if trading anything with the Yen.

Chair Yellen’s Congressional testimony yesterday was fairly neutral. She didn’t back off of rate hikes in any way, and she alluded to global pressures being a risk for the American economy. This is very much seemed to be what the market wanted to hear: Had she backed off of rate hikes (or even just March), that could be seen as a significant sign of global weakness. If she didn’t mention global pressures that could be seen as just dangerous and risky analysis. So, she did a great job of balancing her statements while being approached with a really wide range of questions.

While she was speaking to Congress, the S&P found support and traded higher up to resistance in the most recent bear flag formation (shown below). But after she finished later in the day, stocks started falling again into the US close, and once Europe opened up in the overnight, the major selling took over once again and the S&P throttled down to a new 21-month low.

The major theme here was overall risk aversion. European banks were leading the moves lower, and the flight-to-quality run has continued to pick up: Treasury prices are spiking higher (yields lower) as investors around-the-world duck for cover. So while we may get small rallies higher in equities and other risk assets, the overall tone across global equity markets remains bearish and afraid. As we mentioned a month ago, the favored ‘buy the dip’ strategy in US stocks (on the back of QE) has turned into ‘sell the rip,’ under the premise of tighter monetary policy.

We looked at the context of this situation with some background in US equities last week with a specific focus on the S&P. The chart below is the updated version of that setup with most recent price action applied. 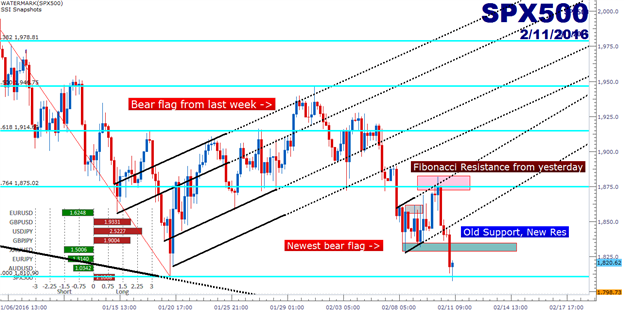 The deeper we get into the New Year, the more obvious it becomes that we’re at an important juncture. Unfortunately, these types of observations are usually only prescient with hindsight; but when you can do something like get short the Yen at USD/JPY 80:00 in the early stages of BoJ intervention or if you can buy stocks just after a QE program is launched, you may find yourself in the comfortable position of being able to sit-in and pick-off a trend that might last for a couple years. This is why that saying ‘the trend is your friend’ is so popular even though it brutally over-simplifies matters.

The ‘turning point’ that I’m referring to is the realization in markets that more and more QE is unlikely to do anything different than what it’s already done; and this is assuming that more QE is even possible. We talked about this last September in relevance to Japan, as it was looking very unlikely that they’d have the ammunition to go for another round of QE and, given the context, Japan appeared to be one of the more vulnerable economies to a larger slowdown in China. And perhaps more to the point, because the BoJ has monetized such a large portion of the Japanese Government Bond market, they had to start buying stocks with their QE purchases in the Government Pension and Investment Fund. After the initial hit of volatility in August and September of last year, the GPIF reported a $64 Billion write down; this is a drawdown of -5.6% on a retirement/pension fund.

So, going into the December meeting, given the hit that had been recently absorbed, it didn’t seem likely that the Bank of Japan was going to do more QE. And when they didn’t, those previously strong trends of Nikkei strength and Yen weakness started to come-off with aggression. And those themes only heated up as global risk aversion continued to increase and capital was looking for anywhere ‘safe’ to flow.

So Japan has been getting hit from both sides. Yen strength puts pressure on Japanese exporters and a falling Nikkei means a deeper drawdown for retirees and pensioners. This increasing pinch might explain why they made that surprise move to negative rates two weeks ago. The hope was that charging banks for deposits with the BoJ would spurn lending. That hasn’t appeared to be the case. After that move to negative rates and setting a high on USD/JPY at 121.69, Yen strength has taken over and we’ve seen over 1,000 pips of movement in under two weeks. For USD/JPY this is a huge move.

This theme has really heated up over the past two days as US rate hike expectations are getting kicked further down-the-road, and this just increases that pain factor for Japan even more. So negative rates don’t appear to be the panacea that the Bank of Japan might have been hoping for.

As USD/JPY was dropping further and further this morning, it was becoming more and more obvious that a panic-type of run was developing here. But at 7:01, that move stopped, catching support at 111.10. Twenty minutes later the Yen caught a massive bout of weakness and USD/JPY swung up to 113.25; a full 215 pips higher than where we were just twenty minutes prior.

The interesting part about the current Japanese situation is that it seems to be an analog for the rest of the world regarding QE. Japan was one of the later Central Banks to jump into the major QE-foray on the back of Shinzo Abe and ‘Abe-nomics,’ and QE appeared to provide a huge initial benefit as Yen weakness allowed Japanese exporters to ride the currency markets to fresh profits and this (combined with the BoJ buying) helped to bring Japanese stock prices higher. It even looked like inflation might begin to tick up for the economy, but even that was a fleeting observation.

So the net impact of QE doesn’t appear to be much more than a currency move that helped Japanese exporters and hurt their trade partners (China specifically, as the Yuan was pegged to the Dollar for much of this time). And now that China is facing significant headwinds, Japan is somewhat along for the ride.

This just made that move to negative rates that much more interesting because it appeared as though it may prelude a larger global movement; but the results thus far appear to have been the exact opposite of what the bank wanted to accomplish. So while the Riksbank or the ECB may be under the impression that negative rates ‘work,’ it’s far too early to be able to make that prognostication. To anyone watching stock prices, that observation would appear to be the opposite of what’s actually happening.

Matters get messy when history gets made; and that’s what markets are struggling with right now. As always, protect your risk. And for a bonus chart today, we’re going to look at EUR/USD.

This was one of our focus markets last year as the ECB was vacillating between QE and deposit rate cuts. When the ECB launched QE, they telegraphed it far and wide. This meant that hedge funds were basically given an invitation to front-run the move. So, from the announcement in July of 2014 until QE was actually launched in March of 2015, the EURUSD put in its major move of over 3,000 pips; and this wasn’t QE because bond purchases hadn’t started yet.

Puzzlingly, as QE actually began, EUR/USD started trending higher in a really consistent bear-flag formation. This lasted for much of the year until October, when Mr. Mario Draghi announced that the ECB would ‘re-examine’ QE. This was largely taken that the bank would increase the program, and, once again, traders tried to front-run the move by selling EUR/USD ahead of the expected announcement.

This finally gave EUR/USD the ammunition to break below that bear-flag. But we warned in November that the ECB has exhibited a pattern of disappointment, as is often the case with politicized Central Banking.

And when December’s ECB announcement came, there was no increase to QE. Just a deposit rate cut to even deeper negative rates, and EUR/USD did the opposite of what many would expect (it went up when rate differentials dictated that it should’ve moved lower).

Since then the Euro has only gotten stronger as the ECB hasn’t provided any additional indication of an increase to QE. This has brought EUR/USD right back up to that bear-flag formation from last year, and we may be nearing a point in the not-too-distant future where that bearish trend may look attractive again. This is one for keeping on the radar. 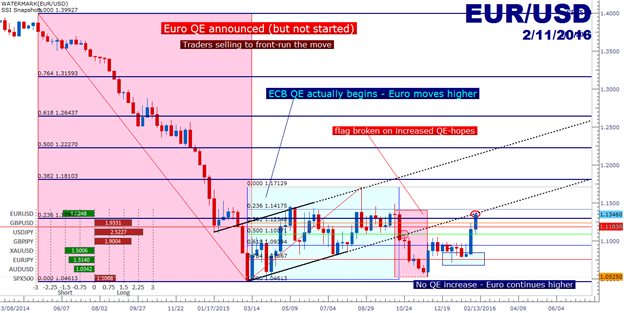