1. China had a surprise interest rate cut this morning; and it’s not a surprise that they cut rates, as this has largely been expected and we’ve been discussing this for the past two months in these market talks; but the way that it happened was somewhat of a surprise. China cut rates at around 7AM Eastern Time on Friday morning, which is 7PM on Friday night in China: Well after the trading day had closed and ahead of the weekend. Normally, these interest rate cuts come in during the week so that Chinese markets can digest them and (accordingly) move higher.

This is the sixth interest rate cut in the past year, with the benchmark lending rate moving lower by 25 basis points to 4.35% and the one-year deposit rate being cut by 25 basis points to 1.5%. We also saw a cut to bank reserve requirements by 50 basis points, with an extra 50 basis point reduction for some banks. The last interest rate cut out of China was on August 25th as the Asian equity meltdown was just beginning, and this provided some relief… for about a day as most global markets continued their descent.

As for where we go from here: We hear from the Fed next week and around the last Chinese interest rate cut this seemed to be the differentiator. As the Fed held a hard-line on talks around a 2015 rate hike, the last cut to Chinese interest rates wasn’t enough to offset the global sell-off. With FOMC and BOJ on the docket for next week, and after the ECB acknowledged that they would re-examine their QE policy in December, traders could potentially be chewing on loose monetary policy from the world’s four largest Central Banks at the same time. If this is the case, expect the stock-buying bonanza to continue.

On the other hand – the Fed has continually said that they want to hike rates to offset ‘excessive risk taking.’ The types of rallies that we’ve seen over the past six weeks have been exactly that: Risky assets are shooting higher under the prospect of loose monetary policy for longer. And with a dearth of available Fixed income investments (which is a consequence of ZIRP, itself), investors have few areas to invest in other than stocks to earn any type of real return. After the shock to markets in August and September, a 2015 rate cut from the Fed has essentially been priced-out of the market.

But if the Fed is genuinely interested in offsetting an introduction of systemic risk into the financial system (somewhat like keeping rates so low for so long that they created a housing bubble from 2003-2006), then we’ll likely be hearing about a quicker-than-expected rate hike in the coming months from the Federal Reserve.

Chinese markets were already closed when this announcement came out from the People’s Bank of China, so we wouldn’t be able to see this reflected there just yet… but we can certainly see this getting priced into international stock indices and futures contracts, including the Nikkei. We discussed the breakout in the Nikkei on Wednesday as the 18,436 level was being broken as Japanese trade data came in extremely disappointing. And emblematic of the ‘bad news is good for stocks’ theme, the Nikkei rocketed higher after this disappointing trade data led by a major contraction of exports to China. This hasn’t stopped and this breakout has continued to run after the past two days’ worth of Central Bank announcements. Should the Bank of Japan look to increase bond purchases (as many are beginning to expect as Japanese data has continued to disappoint), then we could see the Nikkei at 20,000 again very soon.

2. We asked in our title yesterday whether traders would wait to sell EUR/USD, and the answer is a definitive NO! Yesterday’s title was ‘ECB to Re-Examine QE, but Will Traders Wait to Sell EUR/USD?’ The answer here is a definitive ‘no.’ The simple nod towards a re-examination of QE policy in December has served as enough for traders to re-ignite the down-trend in the Euro. And this makes sense given the fact that the Fed, regardless of when they might be looking to kick up rates, is NOT looking at additional QE (at least not yet), but the continued dwindling of European inflation data dictates that the ECB is likely going to need to step up their QE-game. So this leads to that beautiful one-sided monetary policy dichotomy that can allow traders to pick on FX-pairings. Most Euro crosses are already showing this weakness as traders have begun to factor in heavier QE from Europe, but the one that matters most (or at least the most liquid Euro-pair) is showing major bearish tendencies.

In the article, is the EUR/USD down-trend ready for resumption, we outlined two different ways to look at jumping on the short Euro theme; and yesterday we added a third as a short-term trend-line was in the process of being broken as we published: Since then, we’ve seen SSI flip to the long side, meaning retail traders have moved to a net long position on FXCM platforms; and given the contrarian nature of sentiment indicators, this can highlight a great time to start looking to get short EUR/USD.

The other mannerism of getting short was waiting for the 7+ month bear-flag to be broken. After EUR/USD staged its dramatic drop from the 1.40 region in May of last year to 1.05 in March of this year; prices began trending higher in a relatively-consistent channel.

And as panic increased in August and September, we saw the EUR/USD trading higher; and in what can only be considered as emblematic of how myopic financial markets are (and financial media of course, as well) many began to actually consider that the Euro was a safe-haven. This was something that we have vehemently refuted at DailyFX, as only five months ago the world was discussing dissolution scenarios of the Euro-zone, and now some are calling it a safe-haven. More likely, this was unwind of a carry trade built on monetary policy dichotomy; a dichotomy that is back in markets and could allow this longer-term down-trend to continue after seven months of retracement.

3. We haven’t heard the last from Central Banks just yet: As mentioned briefly above, we hear from both the Federal Reserve and the Bank of Japan next week. This, of course, is one full year after the Bank of Japan shocked markets with a Halloween announcement of an increased bond purchase program, and with the continued struggle to produce inflation within the economy, combined with headwinds from China and the rest of Asia slowing down, many are expecting another increase in BOJ bond-buying.

While this is certainly a possibility, one must keep in mind that the Bank of Japan is already fairly deep into QE, to the point where there aren’t any more Japanese Government bonds to purchase as they’re already monetizing every one of them. So, with this recently triggered Chinese stimulus and with the Fed expected to take a step back from rate hikes, we may see the Bank of Japan try to keep some powder dry in case they need to stimulate their economy in the future. To make this a more relevant example: The Bank of Japan is like the trader that already has almost all of their equity tied up in margin, and the very act of opening any new position puts the rest of the portfolio at risk. If you’re in that position, you should be very picky with that next entry as it may be your last.

This could make the Yen a very attractive safe-haven vehicle should the ‘risk-off’ theme come back into markets, and with the data slate for next week on top of the recent performance across global markets – this is certainly a possibility. Below, we’re looking at just the high-impact announcements on the DailyFX Economic Calendar, and notice that we are loaded throughout the week. The big items are the Fed on Wednesday and the Bank of Japan on Friday (Thursday night in the US), but we could certainly see volatility emanate from any of these releases:

High-impact announcements on the DailyFX Economic Calendar For Next Week 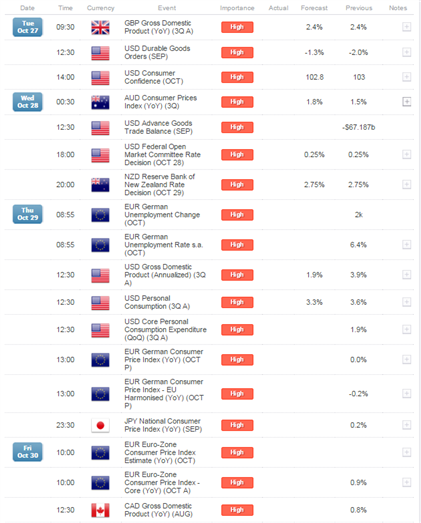