China as Japan 2.0, and the Fed Signals No Concern for Global Markets

1. The Bank of Japan makes no changes to QE: We’ve been discussing this theme for the past couple of months as markets began pricing in an extension or increase in Japanese QE, and we took the position that the Bank would more likely elect to keep some powder dry for down-the-road. In the middle of September, we published the article ‘The Yen as the Safe Haven of Choice,’ and since then we’ve seen quite a bit of posturing around this expectation of additional Japanese QE. This article was published on September 15th, as markets were posing very bearish setups as the world awaited a larger Chinese collapse. Well, that hasn’t happened, at least not yet, as the expectation for more easing overpowered the threat of a larger slowdown.

Well, we aren’t getting that additional easing out of Japan, at least not yet, and this exposes the Yen as a safe-haven candidate should risk-aversion find its way back into markets.

What we did hear from the Bank of Japan last night was downgraded growth and inflation forecasts. The Bank of Japan, like many other Central Banks from developed economies, are continuing to struggle to meet a 2% inflation target. And after three-plus years of QE as part of ‘Abe-nomics,’ the Japanese economy is still seeing deflationary pressures and are continuing to miss their inflation targets, so they’ve just adjusted the target lower to make it easier to hit.

Longer-term, Japan is sitting on a problem that is going to be impossible to fix. This is a sociological issue posed by an aging population. After World War II provided what essentially amounts to a ‘reset’ of Japan, a population boom ensued as capitalism brought prosperity in a way that the country had never seen. This led to a lot of babies, and a ton of jobs available for these people as they became older as exporting activities to trade partners such as the United States increased through the 60’s, 70’s and 80’s. This is when the Nikkei was approaching a monstrous level of 40k.

But as Japan developed and became a significantly more attractive investment, capital flows drove the Yen higher. And as the Yen became stronger, exporting became more difficult, as Japanese goods were now more expensive overseas. Trade and Capital Flows are the Nucleus of the Forex Market, and as the Yen strengthened further, Japan felt even more pain.

As the Japanese economy’s growth cooled, and as inflation slowly turned into a 20+ year pattern of deflation, birth rates moved down massively. The median age in Japanese continued to grow older as new generations of had fewer and fewer children. The Washington Post’s Ana Swanson had written up a phenomenal article on this topic earlier in the year, entitled ‘Japan’s Birth Rate Problem is Way Worse than Anyone Imagined.’ And as the Japanese population continued to age, this meant fewer working people paying taxes for a larger proportion of dependents and retirees.

This would be a contraction of more than 33% in less than 45 years! So, the fact remains – how do you keep Gross Domestic Product growing when the people that make up and produce this GDP are decreasing at a breakneck pace? If you have an answer, I’d love to know, and I’m sure Shinzo Abe and Kuroda would as well, as Japan is essentially faced with a mathematics and sociological issue that’s manifesting itself in an economic manner, and will likely do so over the next ~45-50 years.

So, Japan is in a tough spot. When Abe-nomics was triggered in 2012, Japan was basically faced with the choice to do what they did, or to do nothing at all; and we know what the results of doing nothing would be, as this had just amounted to even more yen strength, even more pressure on exporters, and even more exasperation of an already purging sociological problem. At this point, the Bank of Japan is rather committed to QE, as the Debt-to-GDP ratio of Japan is well over 230, which is more than double a debt-ridden US economy. But long-term, this sociological issue is going to be difficult, if not impossible to beat.

On the chart below, we’re looking at the most recent 35 years of this story as expressed in the Nikkei (JPN225). On the left side of the chart, you can see a bubble inflating as the Post WWII industrialization of the country continued to take root. But after topping out just shy of 40k in 1989, the bubble popped in a very big way. By 2008, the Nikkei had traded all the way down to 6971, this was a drop of 82% from the highs set to end the 80’s!

From 2012, we can see the impact of Abe-nomics; and this has propelled Japanese stocks higher, but you can see how this is just a drop in the bucket in the longer-term view of the Japanese economy. As a matter of fact, we’ve just seen resistance come in off of the 61.8% Fibonacci retracement of this ‘big picture move.’ So, as long as we get a supportive Bank of Japan, as we’ve had since 2012, we’ll likely see continued strength into Japanese stocks, and continued weakness in the Japanese Yen. But for current price action, the Yen is vulnerable, and traders can look to buy in the anticipation of risk-aversion unwinding carry trades.

Unfortunately for the rest of the world, Japan isn’t the only major economy facing a sociological problem. We’ll discuss that in a little more detail later in this article. 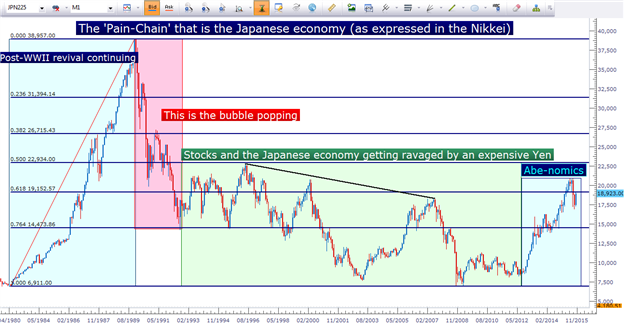 2. The US Dollar Pops and then Drops after the Fed signals no concern for global economy: While I understand that this may sound a bit aggressive, this is essentially what happened.

At the October Fed meeting, we heard the FOMC remove the phrase ‘monitor developments abroad,’ and as we had pointed out in our Market Talk article on Wednesday, this could be seen as hawkish as the addition of this statement in September showed a Central Bank that was cautious about a larger global slowdown.

Since then, we’ve seen US rate hike expectations move closer, and the December Fed meeting is now being thought of for a potential hike, whereas previously this was thought to have been off-the-table.

Accordingly, the US Dollar rallied as this more hawkish Fed-stance permeated through markets. The symmetrical wedge that we’ve been discussing in the Greenback was broken with aggression after this hawkish Fed statement, but since then we’ve seen the dollar top out as investors down-grade this more-ebullient forecast from the Fed. As in, they haven’t done anything for nine years, and they’ve backed off of a rate hike now multiple times with any slight indication of economic weakness; so if we get to December and the global economy is still teetering on the brink of disaster, then we probably won’t be getting a rate hike then either.

For now, the US Dollar is in a bullish stance, as we set a new 6.5 month high on Wednesday after this more hawkish Fed was getting priced-in to markets. The past two days have seen a pull-back on the dollar, but for those looking to get-in with a longer-term trend, this could be a good thing as we may be able to buy a ‘higher-low’ in the coming days. 12,050 could be an interesting level of support, as this was the previous swing-high before the most recent extension of the trend. Old resistance coming in as new support could be one of the most attractive ways of buying a long-term trend, as we discussed in the article ‘A Simple, but Effective Price Action Tell.’ 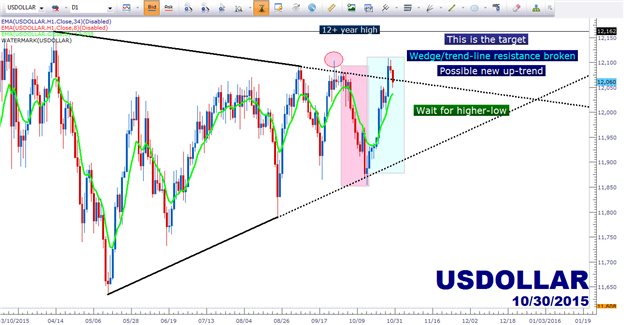 3. Speaking of sociological problems… This topic has been covered at length by periodicals around-the-world, but China has recently rolled-back their one-child policy. Now, Chinese couples are allowed to have two children.

Since 1980, Chinese couples have been limited to one child, and this led to a massive distortion in their population. Many of these couples wanted to have male children, so we’ve ended up with a male-dominated society that has a very similar problem as what we discussed with Japan above. As in, the population in China is aging very quickly as birth rates were dampened by this one-child policy. And as this aging population retires and ages out of the workforce, there will be fewer people working to pay for more dependents. Some estimates suggest that over 400 million people would’ve been added to the Chinese economy since this policy was instituted in 1980; and the fact that they weren’t poses the same exact problem for the Chinese economy that the Japanese economy had.

But wait, there’s more: Not only does China compare strongly to Japan in a sociological regards, they also compare from an economic standpoint. The ‘inflating bubble’ that we alluded to in the chart above was basically driven by industrialization, with hopes of Japan becoming more of a ‘consumer-based economy.’ Does this sound familiar? Well, Japan converted into more of a consumer-based economy over the past 30 years, but they’re still reliant on exports, and this ‘conversion’ to a more consumer-based economy took place while stocks were melting down and deflation was ravaging the country.

The comparison is very strong, and this is why China is working so hard to prevent becoming Japan 2.0. This is why we’re seeing the government try to usher in so many reforms, such as repealing the one-child policy. But they’re going to have their work cut out for them, because we’re basically looking at a math problem. Over the next few decades, we’re likely going to see over 1/3rd of the Chinese population over the age of 60.

As a wise man once told me, you can’t beat math. For now, we’re still in the ‘blue phase’ of the above Nikkei chart above in relevance to the Chinese economy. As in, the bubble is still building, led by massive government intervention as the economy slows. But, if recent history has told us anything, bubbles always pop. The only question is how much devastation might come about. 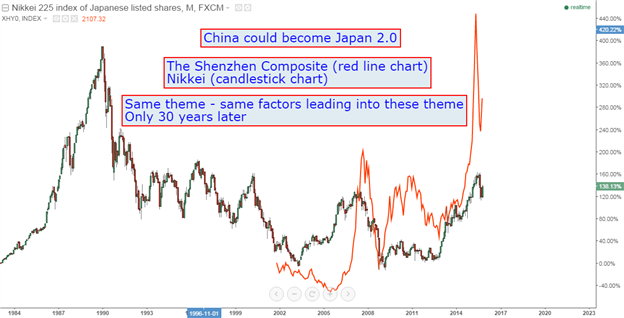