- Will the Bank of England’s (BoE) Inflation Report (May 13) Highlight a Slower Recovery?

The U.K.’s 1Q Gross Domestic Product (GDP) report may dampen the appeal of the British Pound and undermine the near-term rebound in GBP/USD as the growth rate is expected to increase an annualized 2.6% after expanding 3.0% during the last three-months of 2014.

Threats of a slower recovery may encourage the Bank of England (BoE) to adopt a more dovish tone while delivering its quarterly inflation report on May 13, and the central bank may look to further delay its normalization cycle in an effort to stem the downside risks surrounding the region.

Weakening demand from home and abroad may pave the way for a marked slowdown in the growth rate, and a dismal GDP print may trigger a near-term topping process in GBP/USD as market participants scale back bets for higher borrowing-costs in the U.K.

Nevertheless, the ongoing improvement in the labor market paired with the rebound in business outputs may generate a positive development, and an unexpected pickup in GDP may spur a larger advance in British Pound as it boosts interest rate expectations. 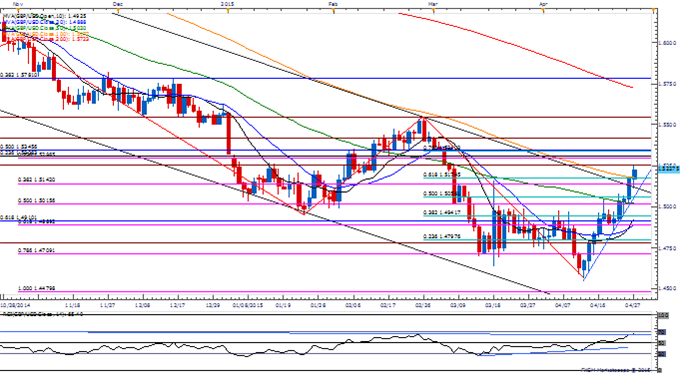 The U.K. economy expanded at a slower-than-expected pace during the last three-months of 2014 as the growth rate climbed an annualized 2.7% following a 2.6% rise in the third-quarter. The lackluster recovery may encourage the Bank of England (BoE) to largely retain a wait-and-see approach in 2015, but we may see Governor Mark Carney continue to prepare U.K households and businesses for higher borrowing-costs as the central bank looks for a pickup in economic activity. The initial bearish reaction was short-lived as GBP/USD pushed above the 1.5100 handle ahead of the North America trade, with the pair ending the day at 1.5165.