A surprising turn of events after the close on Friday precipitated significant gaps in prices when markets opened this week, gold prices included. US President Donald Trump announcing that the Mexico tariffs would be “suspended indefinitely” after an agreement regarding immigration and the southern border was reached between the two countries.

The gains by US equities, US Treasury yields, and the US Dollar – in aggregate reflecting market participants’ collective belief that the odds of a sharp slowdown to the US economy and thus three rate cuts over the next year have dropped, per Fed funds futures – make for a difficult environment for gold prices at the start of the week.

There have been two significant drivers of gold price action over the past month, with the former feeding into the latter: developments around US-led trade wars; and the ensuing speculation around the timing of Fed rate cuts. With the US-China trade war intensifying over the course of May, culminating in the imposition of tariffs at the start of June, gold prices saw their role as a safe haven renewed.

And with the threat of tariffs on Mexico arriving in the second half of the month, all of the sudden there was a tangible possibility of a dramatic slowdown in the US economy: estimates suggest that the combined effect of the China, Mexico, and global auto tariffs would have knocked off over 1% from US GDP this year alone.

With the prospect of a sharp slowdown hitting the US economy, traders have been aggressively pricing in a more dovish Federal Reserve over the next year. Federal Reserve policymakers, including Fed Chair Jerome Powell, have been offering up commentary that has reinforced the market’s collective belief. The resulting drop in US Treasury yields (and US real yields) proved to make for one of the more bullish fundamental backdrops for gold prices in quite some time.

Yet with the Federal Reserve in its blackout period before the June Fed meeting, a bullish catalyst for gold prices has been removed this week: policymakers talking up the possibility of rate cuts.

Additionally, now that the Mexico tariff threat has been lifted, another bullish catalyst that helped drive gold prices higher in recent weeks has been eliminated. In turn, the odds of the Federal Reserve feeling the need to take immediate dovish policy action has been reduced; whereas last week Eurodollar contracts (interest rate contracts between commercial banks) were pricing out 73-bps over the next year, they are only pricing out 65-bps today. This means that market participants are thinking the Fed will be less dovish moving forward, a mindset that doesn’t cater to a bullish outlook for gold prices.

It bears mentioning again that one of the more important factor of the recent gold price rally has been how gold volatility moved higher alongside prices. Whereas other asset classes don’t like increased volatility (signaling greater uncertainty around cash flows, dividends, coupon payments, etc.), precious metals tend to benefit from periods of higher volatility as uncertainty increases the appeal of gold’s and silver’s safe haven appeal. 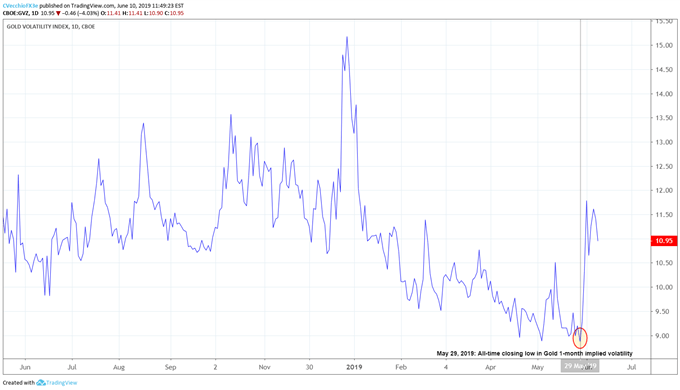 That gold volatility (as measured by the CBOE’s gold volatility ETF, GVZ, which tracks the 1-month implied volatility of gold as derived from the GLD option chain) has started to pullback suggests that gold prices are facing a more difficult environment in the near-term.

Gold Price Pullback Was Due – Corrective Price Action is Here

Last week we examined episodes since August 2018 when gold prices were more than 2% above their daily 21-EMA, positing that this was a sign that the gold price rally was nearing exhaustion.

Then on Friday, after gold prices returned to the base of the bullish falling wedge, it was noted that “traders should be cautioned the fulfilment of this pattern may mean that the gold price rally is due for a breather…the current technical environment for gold prices is similar to other times when rallies were cut short.” 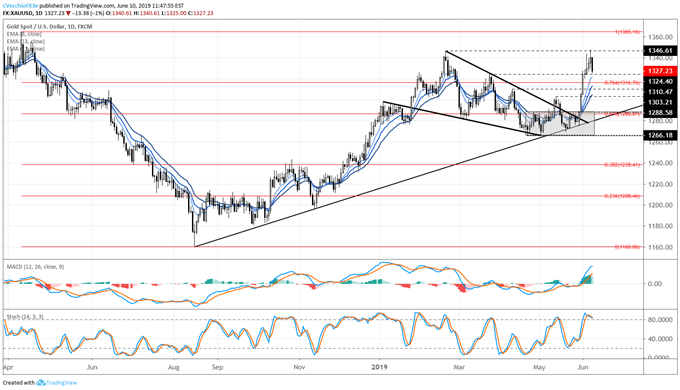 If this is indeed another episode where the gold price move in excess of 2% of the daily 21-EMA signaled near-term exhaustion, then the pullback in gold prices may simply be a healthy correction in context of a longer-term uptrend. The fulfillment of the bullish falling wedge pattern in gold prices only underscores the rationale that the recent gold price rally is due for a pause (just like at the end of January 2019, for example).

Given that trading is both a function of price and time, the correction could simply mean that gold prices trade sideways as the moving averages catch up and the overbought condition of gold prices being too far extended above the daily 21-EMA is worked off. The former resistance now support appearing as the March 25 swing high at 1324.40 may be the first near-term support level followed by the daily 8-EMA at 1322.07; a break below this area (1322.07/1324.40) would a sign that a deeper pullback is due for gold prices. 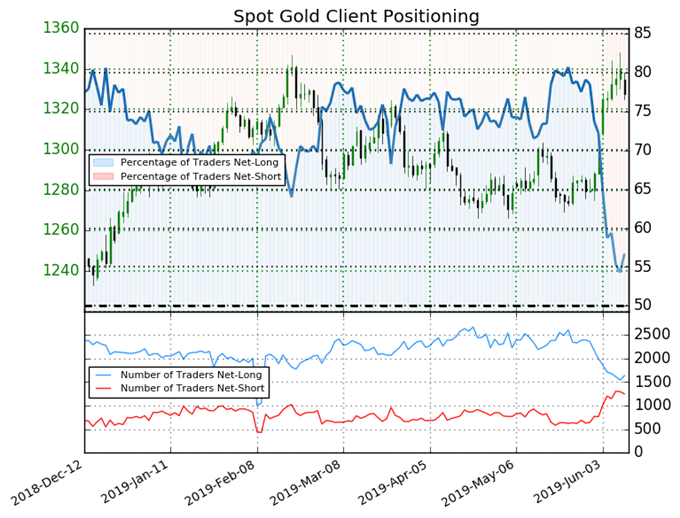 We typically take a contrarian view to crowd sentiment, and the fact traders are net-long suggests spot gold prices may continue to fall. Traders are further net-long than yesterday and last week, and the combination of current sentiment and recent changes gives us a stronger spot gold-bearish contrarian trading bias.