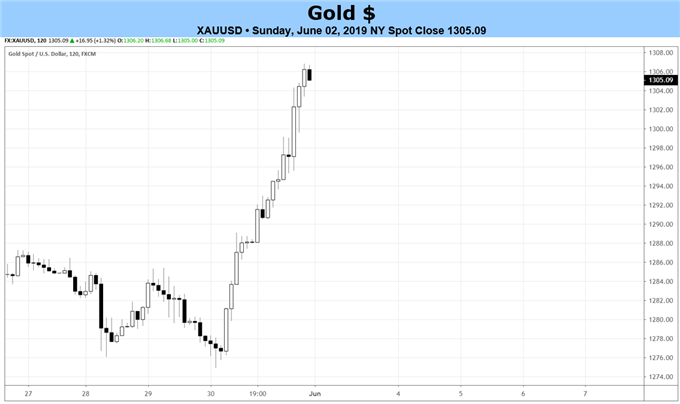 Gold prices had a strong week across the board to finish out May, but it’s clear based on both the weekly and monthly performances over various XAU-crosses that risk appetite is continuing to erode. Amid the backdrop of falling global sovereign bond yields and as well as global equity markets, gold prices rose in every major denomination.

Gold in GBP-terms (XAUGBP 2.26%) led the way higher as the British Pound came under renewed pressure around the latest Brexit developments, while gold in CAD-terms (XAUCAD 2.20%) was bolstered by the Canadian Dollar’s drop alongside the slide in crude oil prices. Ahead of the upcoming June European Central Bank rate decision, gold in EUR-terms (XAUEUR +1.93%) the third-best performer overall.

Overall, the demand for safe haven currencies is evident even among the gold-crosses: three of the worst performing gold-crosses in the past week were gold in JPY-terms (XAUJPY 0.66%), gold in CHF-terms (XAUCHF 1.51%), and gold in USD-terms (1.59%).

The overall performance of gold over the past month was strong, although similar to the last week of May where the safe haven currencies proved to be resilient, the monthly performance among the various denominations illustrates a quickly deteriorating state of global market sentiment.

Only two gold-crosses fell during May, gold in CHF-terms (XAUCHF -0.13%) and gold in JPY-terms (XAUJPY -1.18%). Meanwhile, the currencies hit by central bank rate cut concerns, the Australian and New Zealand Dollars, saw gold in AUD-terms (XAUAUD 3.35%) and gold in NZD-terms (3.89%) gain significant ground since the start of May. The best performing gold-cross over the past month was gold in GBP-terms (XAUGBP 4.95%).

Trade War Concerns Swirl with the US at the Center

Global market sentiment has eroded sharply in recent weeks for no reason more significant than the prospect of trade wars initiated by the United States becoming wars of attrition. The US-China trade war appears to have no immediate end in sight as both sides ramp up rhetoric and policy responses; the next week should be noteworthy as the long-threatened 25% tariffs on $200 billion of imported Chinese goods goes into effect.

Meanwhile, US President Donald Trump is proving that he really is a “tariff man” as he has threatened fresh tariffs on Mexico as he seeks to push forth immigration reform efforts along the southern border of the US. Regardless of the efficacy of using tariffs as a tool to negotiate on immigration, the fact is that the Trump administration has shown a willingness to go to places that other US presidential administrations have not, so it’s too soon to say if these ‘barks’ will result in ‘bites.’

With trade war concerns around the globe swirling with the US at the center, there has been a steady shift towards safe haven assets like developed countries’ sovereign bonds in recent weeks. Amid a stable inflation backdrop, the drop in nominal bond rates like German Bunds, UK Gilts, and US Treasury yields has produced an environment of falling real yields, which is one of the more fundamentally bullish developments that could happen for gold prices. Overall, volatility moving up across asset classes should prove supportive for gold prices as well.

Elsewhere, the UK remains embroiled in domestic political turmoil as the lack of progress on Brexit has ended the tenure of UK Prime Minister Theresa May. While jostling for the next Tory party leader continues as former London mayor and Brexiteer Boris Johnson has emerged as a clear frontrunner, the rise of the Brexit party around the European parliamentary elections has raised concerns that, if there were to be a second referendum for either the (1) EU-UK Withdrawal Agreement, or (2) a no deal, “hard Brexit,” the UK electorate might opt for the latter. As hard Brexit concerns rise, so too has gold in GBP-terms (XAUGBP).

The upcoming economic calendar is densely populated with significant economic data, meaning that traders will have to contend with event risk beyond the day-to-day developments along the overarching thematic influences like Brexit and trade wars.

On Tuesday, the Reserve Bank of Australia is poised to cut rates at its June meeting which may continue to help gold in AUD-terms (XAUAUD), while the preliminary May Eurozone inflation report will underscore the soft growth and inflation environment helping gold in EUR-terms (XAUEUR).

Gold in AUD-terms (XAUAUD) is back in focus on Wednesday with the release of the Q1’19 Australia GDP report, and gold in EUR-terms (XAUEUR) takes center stage again on Thursday during the June European Central Bank meeting.

At the end of the week, gold in CAD-terms (XAUCAD) and gold in USD-terms (XAUUSD) will draw attention with the dual releases of the May Canada jobs report and the May US jobs report.

Finally, looking at positioning, according to the CFTC’s COT for the week ended May 28, speculators increased their net-long Gold positions to 86.7K contracts, up from the 84.6K net-long contracts held in the week prior.