- The January FOMC meeting paved the way for a new perception regarding the trajectory of rate hikes in 2019, boosting risk appetite and propelling higher yielding and high beta assets to the topside.

- While it’s not unusual to see both Gold and the Japanese Yen perform well side-by-side, it is odd that US equity markets have joined them; typically, these assets sit on opposite sides of the risk appetite spectrum.

- Retail traders have been buying the US Dollar since the FOMC date decision.

The US Dollar (via the DXY Index) has struggled in the wake of the January FOMC meeting, although losses are not sticking this morning. Amid a torrent of disappointing Eurozone economic data, a weaker Euro – the largest component of the DXY Index at 57.6% - is helping keep the greenback afloat. Otherwise, there are plenty of warning signs across asset classes that the Fed’s decision yesterday is provoking a change in perception regarding how policy will unfold over the course of the year.

The fact of the matter is that while it’s not unusual to see bothGold and the Japanese Yen gain ground at the same time, it is unusual that US equity markets have joined them in trading to the topside. Such price action is reminiscent of the ‘QE years,’ when the US Dollar burned while all other assets rallied. Recently, this type of relationship hasn’t existed; typically, these assets sit on opposite sides of the risk appetite spectrum: Gold and the Yen on one end, equity markets on the other.

That the US Dollar is staying elevated in such an environment should be a warning signal to traders. There are few ‘good’ options in the FX market at present time, from the US Dollar’s own issues (US-China trade war; government shutdown(s); FOMC rate hike path), to the British Pound’s (Brexit), to the Euro’s (slowing growth and inflation, rising political instability). In other words, whereas a common turn of phrase was that the US Dollar was ‘the best house in a bad neighborhood,’ it may be the case that the FX market is simply a ‘bad neighborhood’ at this point in time. Traders should anticipate more volatility. 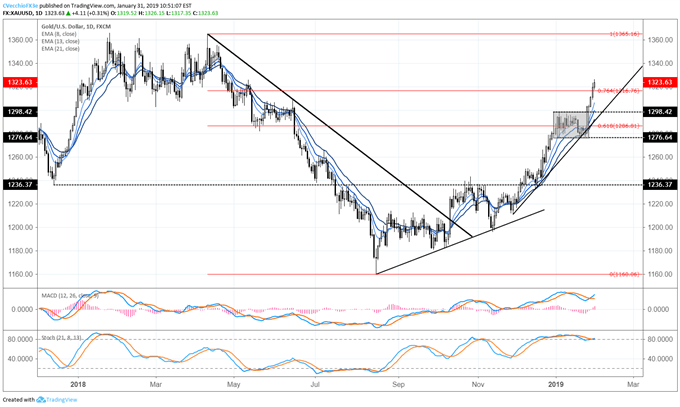 There’s little doubt that Gold has been a main beneficiary of the many minor issues blossoming into full-blown problems. That Gold has performed so well in an environment marked by struggling inflation expectations across the developed world speaks highly of its fundamental underpinnings at present time.

When we last checked in on Tuesday, we said “with price well-established above the 61.8% retracement of the entire 2018 high-low range, there is sufficient evidence to think that this Gold breakout attempt is a significant step towards cementing a longer-term bullish forecast. In the near-term, the equal-measured breakout move from the range calls for Gold to rally towards 1320 over the coming sessions.” Price last traded at 1323.63 at the time this report was written.

While the technical posture for Gold remains very bullish – price above the daily 8-, 13-, and 21-EMA envelope while both daily MACD and Slow Stochastics are rising in bullish territory – the fact is that Gold’s rally may be getting a bit too frothy in the short-term.

Considering that we’re in a similar environment today – US-China trade war, Brexit, etc. – but with new issues exacerbating concerns – Fed hike path, Eurozone data – it stands to reason that the fundamental backdrop for Gold has only firmed up over the past several months. If Gold’s rally pauses over the next few days, by no means does that mean that it is over; in fact, it may be a welcomed reprieve now that prices have been overextended to a certain degree. 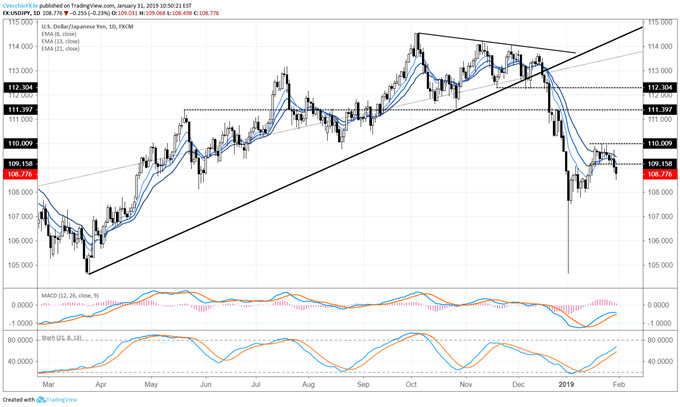 That USD/JPY has struggled in the wake of the FOMC decision but US stocks are still able to run higher is quite unusual. But with Gold rallying and US Treasury yields falling, it appears that USD/JPY is not the outlier, and it’s move lower can be trusted. The break of the range that formed since mid-January, between 109.15 and 110.00, gave way to the downside yesterday with a bearish outside engulfing bar. Now, price is below its daily 8-, 13-, and 21-EMA envelope. Daily MACD has started to turned lower (albeit not in bearish territory yet). The bias is now for lower prices until yesterday high of 109.74 is broken. 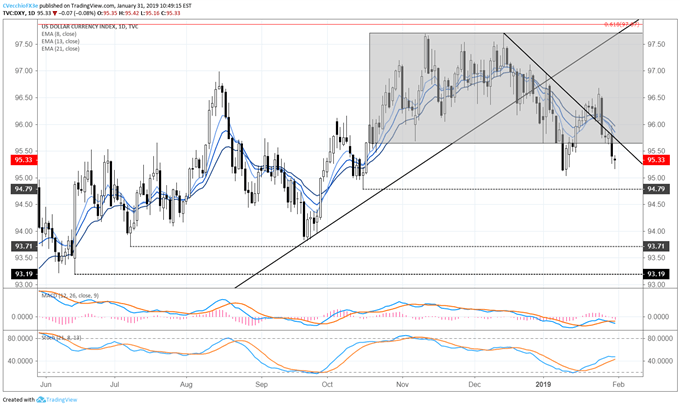 Yesterday we said that “it still holds that DXY Index needs to move outside of the 95.65-97.71 consolidation that formed between mid-October and early-January before a directional move is sought after. Even then, support would be close by at the 2019 low at 95.03. Choppy trading should persist over the coming days.” Indeed, the DXY Index moved below 95.65 but has yet to reach the 2019 low established earlier this month at 95.03. There’s little doubt that, from a technical perspective, traders should be looking lower in the near-term if any direction at all: the bearish outside engulfing bar yesterday cemented price below its daily 8-, 13-, and 21-EMA envelope. More choppy trading is ahead, particularly with the January US Nonfarm Payrolls report due tomorrow.