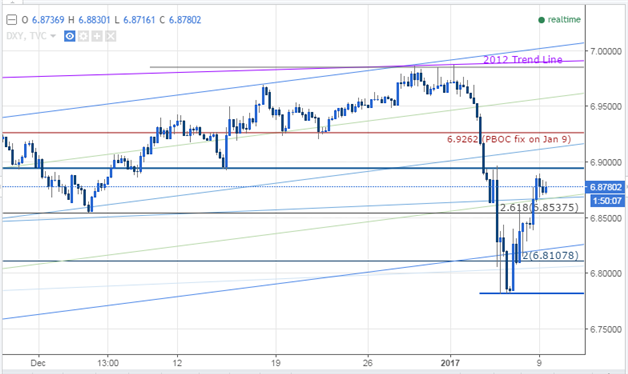 USD/CNH: Is a New Trend Setting In?

- The offshore Yuan remained stronger than the PBOC’s guided level as well as the onshore Yuan.

- China’s foreign reserves continued to drop in December 2016 but maintained above $3 trillion.

- The Yuan’s overnight borrowing cost in Hong Kong dropped to 14.05% on Monday from 61.33% last Friday, though still significantly above an average daily rate of 2.86% in 2016. The PBOC weakened the Yuan by -594 pips or -0.87% against the U.S. Dollar on the day, the largest drop by percentage since June 2016. Despite cheaper borrowing costs and a weaker guidance for the Yuan, the USD/CNH failed to break above its prior swing-high amid an unclear outlook of the U.S. Dollar. As of 10:20am EST, the offshore Yuan traded at 6.8771 against the Dollar, which was stronger than the onshore Yuan, trading at 6.9344.

Our Currency Strategist Michael Boutros gave out the technical setup for the USD/CNH in the near term. 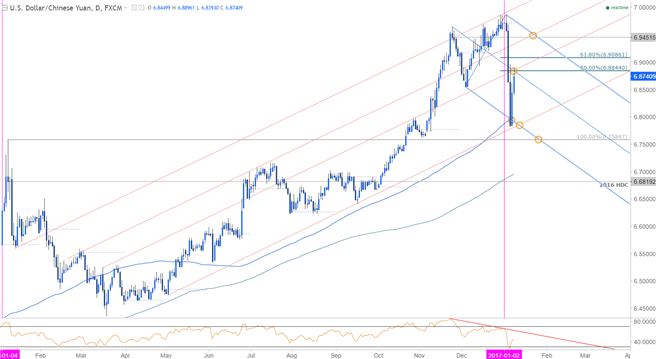 USDCHN turned from slope resistance early in the year on building bearish divergence. The pair failed to hold below near-term slope support last week with the subsequent rebound now testing confluence resistance around 6.8844- this level is defined by the 50% retracement of the decline off last week’s high, the median-line of the descending pitchfork formation & parallel resistance extending off the 3/16 high.

The broader risk remains weighted to the downside while within this near-term slope with our bearish invalidation level set to 6.9452. A rally surpassing this level would be needed to mark resumption of the broader uptrend. Key support remains with the lows we made last week with a trendline confluence converging on that level over the next few days at 6.7818. A move below the 61.8% retracement at 6.7585 would suggest a more meaningful correction is underway with such a scenario targeting 6.6820-6.6950.

On Monday, the PBOC published a statement addressing that “the Yuan was basically stable against a basket of currencies in 2016”: The annualized volatility for CFETS Yuan Index in 2016 was 2.8%, lower than the 3.6% in the Dollar/Yuan fix. Looking forward, the regulator says that Trump’s policies, which may impact the outlook of the U.S. Dollar, “remain to be seen”. The PBOC expects that the Yuan will be able to maintain basically stable within a reasonable range while floating with increased flexibility.

- China’s foreign reverses dropped to $3.0105 trillion in December from $3.0516 trillion in November, slightly better than a forecast of $3.0100 trillion by Bloomberg. The print held just above the psychological level of $3 trillion. 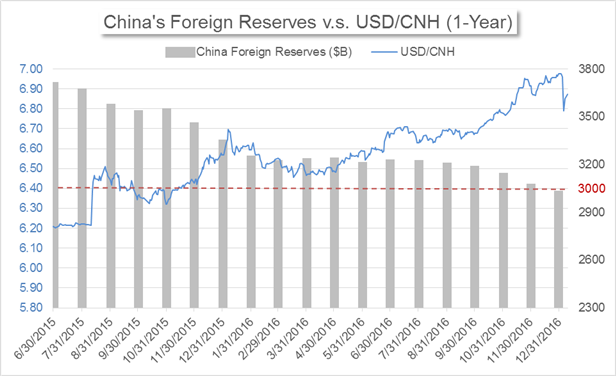 However, the real test for the country’s foreign holdings comes in early 2017, after individuals’ annual quota renewed: Chinese citizens are allowed to exchange up to $50,000 in foreign currencies in a new year. The tightened oversight announced by China’s FX regulator recently may slow down the pace of such purchases impacting foreign reserves. The January-2017 print to be released between February 6th and 7th will give out more clues on whether the key indicator can maintain above the $3 trillion threshold under renewed pressure.

- China’s property market had a weak opening in 2017 amid the introduction of numerous cooling measures over the past three months. According to China Index Academy, sales in the four tier-one cities dropped -6.08% month-over-month or -4.28% year-over-year in the first week of 2017. Sales in 14 surveyed tier-two cities fell even more, with a monthly decline of -38.49% and an annualized drop of -20.09%.