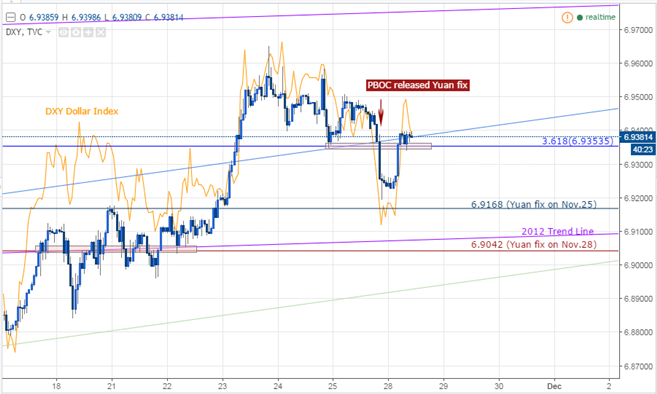 - The offshore Dollar/Yuan was testing a major support of 6.9354 on Monday after pulled back from the record high.

- The PBOC Deputy Governor Yi Gang ruled out a possibility of re-pegging the Yuan against the U.S. Dollar.

- Both the Chinese banking and insurance regulators announced to strengthen oversight on financial sectors.

The PBOC strengthened the Yuan against the U.S. Dollar by +126 pips or +0.18% on Monday after weakened it for three consecutive trading days. The offshore Yuan rose against the Dollar, with the USD/CNH dipping 6.9196 within two hours following the release of the Yuan fix. However, the retracement seen in the USD/CNH was not solely driven by the PBOC’s guidance; as we can see from the 1-hour chart, the ICE’s Dollar Index (DXY) dropped over the same span of time as well, meaning Dollar moves have contributed to the Yuan pair. In the near term, market forces will likely continue to be the primary driver to Dollar/Yuan rates, as the PBOC has shown signs of tolerance on Yuan moves. In terms of levels, the offshore Yuan pair was testing a major support of 6.9354 (361.8% extension of the previous major move and the top of a parallel) at the moment.

Compared to other currencies, the Yuan’s loss against the Dollar was relatively small. The CFETS Yuan Index and the BIS Yuan Index rose +0.13% and +0.15% respectively to 94.67 and 96.04 on November 25 from a week ago; the SDR Yuan Index, in which the U.S. Dollar has the largest weighing among all three basket indexes, fell slightly by -0.04% to 95.29; over the same span of time, the Yuan lost -0.60% against the Dollar offshore and -0.47% onshore. This indicates that the Yuan remained basically stable against a basket of currencies, despite of the record-setting levels seen in Dollar/Yuan rates. 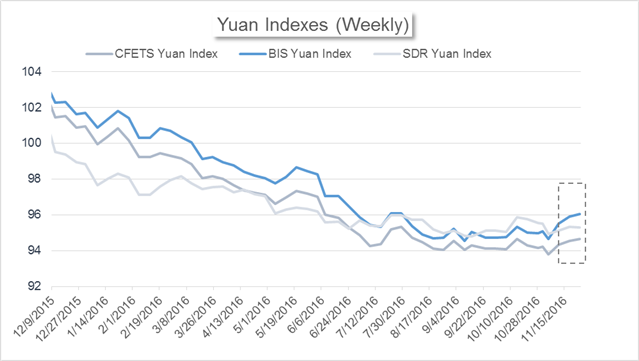 Mr. Yi also reiterated the Central Bank’s exchange rate target - maintaining the Yuan basically stable against a basket of currencies, and more importantly, ruled out the possibility of re-pegging the Yuan against the Dollar, as the basket reference regime will better reflect the international value of Chinese products while China has over 200 trade partners in the world, not just the U.S.

In terms of China’s foreign reserves, the Deputy Governor said that they are very sufficient, able to repay all China’s foreign debts and cover six months of imports and other domestic demand for foreign exchange. He admitted that some capitals may have flown out, seeking safe havens amid concerns on China’s economic slowdown, but he is confident that funds will flow back to China as the economy gradually recovers.

- The Vice Chairman of China Insurance Regulatory Commission Chen Wenhui said on Monday that credit risks for insurers are rising. He told that over 80% of insurance funds were invested in credit-related assets as insurance firms looked for higher yields amid low interest rates in banks. Over the following periods, the insurance regulator will promote the setup of chief risk officers in insurance companies and tighten supervision on their core business.

- China Banking Regulatory Commission issued drafted rules on Monday requiring commercial banks to tighten risk management in derivatives. In specific, banks must include counterparty credit risk in their risk management systems. This is seen as a further move that Chinese regulators take in the effort to strengthen oversight on Chinese financial markets. Curbing economic and financial risks has been set as a prioritized target, according to the PBOC’ 3Q Monetary Policy Implementation report.