- The Dollar/Yuan focus in the coming session shifts to the PBOC’s guidance after Trump wins the presidency.

- The NDRC launched multiple measures to curb soaring prices in the housing sector and commodities markets.

- The U.S. election dominated Dollar/Yuan moves over the past 24 hours. The initial response to Trump’s win was risk aversion, with the U.S. Dollar plunging against its counterparts including the Yuan; the implied probability of Fed raising rates in December dropped to below 50%. However, a few hours later, the U.S. Dollar bounced up with recovered expectations on the December Fed rate hike. As of 1:30pm EST, the Dollar has eased earlier losses and managed gains against the Yuan, with the USD/CNH touching 6.8317, the new record high.

The offshore Dollar/Yuan pair broke the key level of 6.8108 during the New York session. Traders will want to keep eye on the PBOC’s guidance on Thursday, as it may determine whether the pair can hold above this key level. On Wednesday, the Central Bank issued the Yuan fix before Trump’s win was confirmed; the Chinese regulator only weakened the Yuan slightly against the Dollar, by 15 pips to 6.7832. 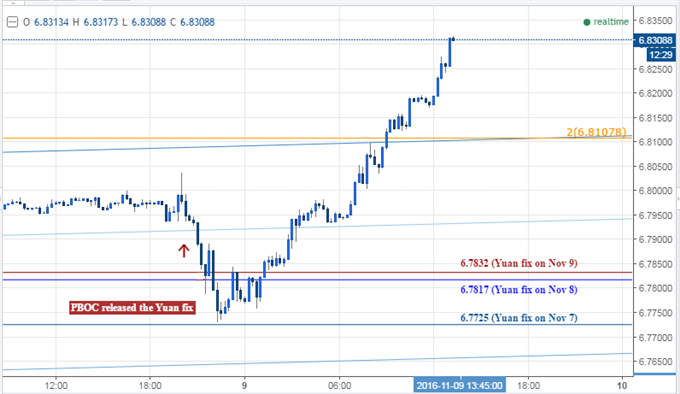 - Outflows of Foreign Direct Investment (FDI) in Chinese financial institutions exceeded inflows in the third quarter, the first time since China’s foreign exchange regulator, SAFE, began to report this kind of data in 2012. The net outflows were 15.43 billion Yuan ($2.315 billion). This is consistent with other measures of China’s capital flows, such as foreign reserves and the total outstanding funds for foreign exchange; all the gauges signal outward capital flows from China. The uneased capital outflow pressure reduces the likelihood of Chinese regulators supporting the Yuan against the Dollar.

- Chinese top policymakers continued to tighten regulations on the housing market. On Tuesday, the National Development and Reform Commission (NDRC) and the Ministry of Housing and Urban-Rural Development (MOHURD) issued a joint announcement that the two regulators will conduct investigations on real estate developers and agencies in provincial capitals from November 10th to December 20th. This is considered as a move to further curb the soaring housing prices in tier-one and tier-two cities.

In the 3Q Monetary Policy Implementation report released yesterday, the PBOC mentioned for the first time that it will “pay attention to curbing asset price bubbles and preventing economic and financial risks. This means that China has prioritized bringing down the soaring housing prices, and therefore, we may see additional tightening rules to be introduced over the following periods.

- 66 Chinese securities companies have been approved to participate in Shenzhen-Hong Kong Stock Connect by the Shenzhen Stock Exchange. According to the Exchange, participants will need to test their technical systems on either November 11th or 18th after the day’s trading is closed. This means that the official launch of the trading link will be after the 18th and is highly likely to be on the 28th.

- The NDRC told on Wednesday that two major coal producers have signed long-term contracts with two national utility providers, which ensures both fixed coal supply and prices. The regulator encouraged other mines to sign similar medium- to long-term contracts, and told that the government will provide assistant to those mines for their coal shipments. Over the past few weeks, China’s coal spot and futures prices were soaring amid speculation of shortage in coal supply. On Tuesday, three main Chinese commodities exchanges introduced a series of hikes in fees and margins in the effort to curb rallies in coal and other raw material prices.