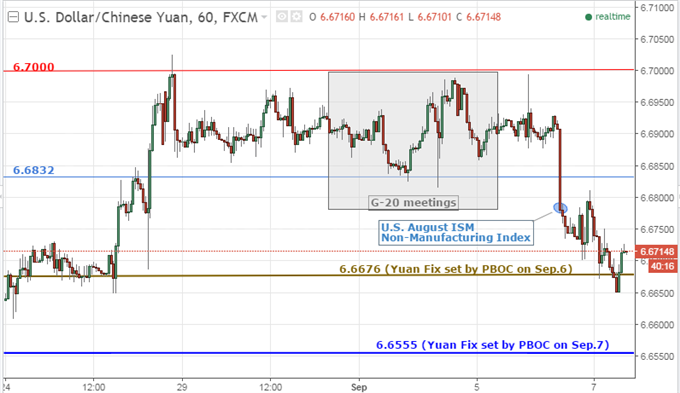 - The PBOC continued to guide the Yuan stronger against the U.S. Dollar to 6.6555 on Wednesday.

- China’s foreign reserves in August dropped to the lowest level since December 2011.

- The decline in foreign reserves have seen slowing down since February 2016.

- The PBOC continued to guide the Yuan stronger against the U.S. Dollar on Wednesday; the daily fix for the USD/CNY was lowered to 6.6555 by the Central Bank. The offshore Yuan strengthened against the U.S. Dollar to the level set by the PBOC on Tuesday, with the USD/CNH falling to levels around 6.6676. This is mostly driven by a weaker-than-expected U.S. ISM Non-Manufacturing Index that reduced the odds of Fed rate hike in September.

The offshore Yuan (USD/CNH) now is about 120 pips away from the daily fix set on Wednesday. Whether the pair can drop to the new weekly lows may depend on key event risks from both China and the U.S. over the following session.

The full economic calendar can be found here.

- China’s Foreign Reserves in August dropped to the lowest level since December 2011. The foreign reserves print in August came in at $3182.2 billion, slightly below the expectation of $3191.0 billion and less than the $3201.1 billion in the month prior. This is the second consecutive drop in reserves in two months. 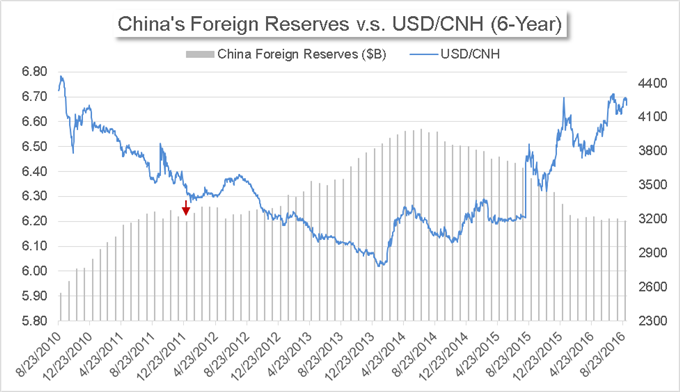 The continued drop in the stockpile may partially result from shrinking value in non-U.S. Dollar assets that China holds. The U.S. Dollar strengthened against most major currencies and gold in August amid heat-up discussions on Fed rate hikes. For instance, despite an increase of 160,000 ounces in China’s gold reserves, the value of gold reserves dropped $1.715 billion in August from the month prior. Also, the Dollar’s strength could have attracted capitals flowing out of China, which added pressure on the country’s foreign reserves. What’s more, the demand of Chinese individuals in foreign exchanges normally increase in summer due to overseas tours and study; this may contribute to drops in China’s foreign reserves in July and August as well.

Although China’s foreign reserves have dropped to the lowest level in nearly five years, the rate of decline has seen slowing down. Taking a close look at China’s foreign reserves since 2016, we can see that the reads are actually on a wave with reduced volatility. The Yuan’s weakness over the past five months did not lead to sharp drops in foreign reserves, unlike in between August 2015 and January 2016 when Chinese financial markets had a series of crisis. 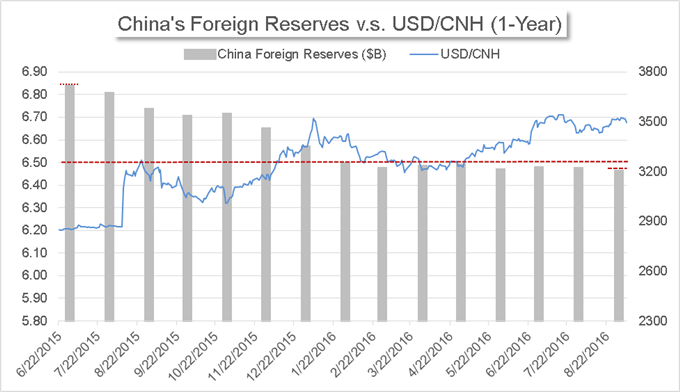