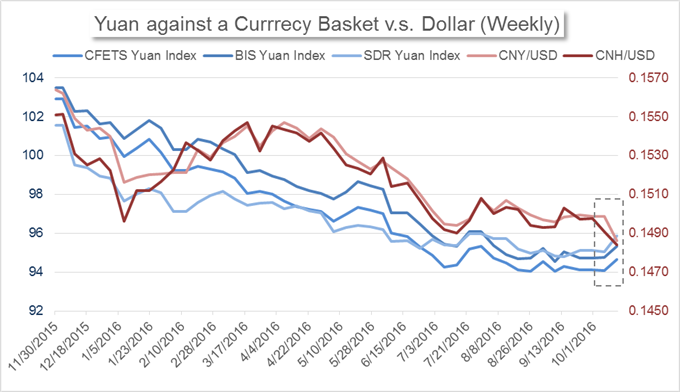 - The Yuan has gained more than 0.6% against a currency basket over the past week despite losses against the U.S. Dollar.

- The gap between M1 and M2 growth narrowed and home loans dropped in September.

- China’s State Council approved special supports to the Northeast region with the slowest growth in China.

Over the past two weeks, the Yuan has lost more than -0.8% against the U.S. Dollar onshore and over -0.9% offshore; however, the Chinese currency has gained over +0.55% against a basket of currencies during the same span of time. In specific, the CFETS Yuan Index, BIS Yuan Index and SDR Yuan Index, measures for the Yuan to a currency basket, increased +0.61%, +0.62% and +0.82% respectively from October 7th to 14th, amid the weakness in Pound, Euro and Yen.

The PBOC’s current exchange rate target is to maintain the Yuan relatively stable against a basket of currencies. If the regulator wants to offset Yuan’s gains in the currency basket, the Yuan may need to devalue further against the U.S. Dollar, which means that the USD/CNH and USD/CNY could reach new highs over the following periods.

The gap between the growth in M1 and M2 continued to narrow in September, according to a report released by the PBOC on Tuesday. The spread has dropped to 13.2% in September following 13.9% in August and a record-high level of 15.2% in July. As we discussed earlier, wide gaps between the growth in M1 and M2 in recent months mostly result from a lack of investment opportunities; this has become a major constraint for the PBOC to introduce additional easing measures. A narrowed gap indicates that more companies and individuals began to spend their money rather than holding it in banks. 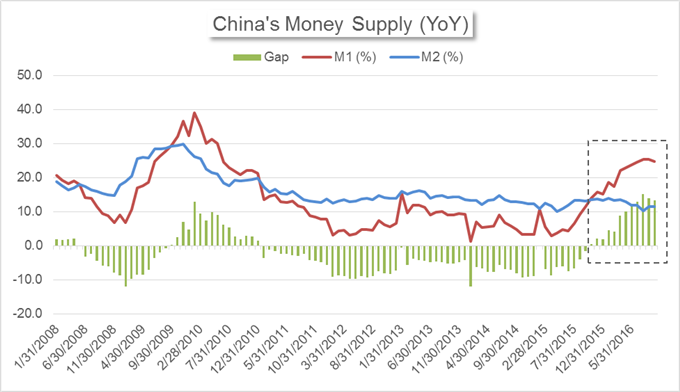 China’s New Yuan Loans rose to 1.220 trillion Yuan in September, larger than 949 billion Yuan in the month prior; the print is also well above a consensus forecast of 1.000 trillion Yuan from Bloomberg. More importantly, new home loans dropped to 574.1 billion Yuan from 675.5 billion Yuan in August; the proportion of home loans to total new lending also fell to 47.1% from 71.2% in August. Property loans became the sole driver to banks loans in the past two months, which increased the risk of price bubbles in the housing market. Chinese regulators have introduced a series of tightened regulations, including restrictions on mortgage issuance, in the effort of cooling the overheated housing sector. 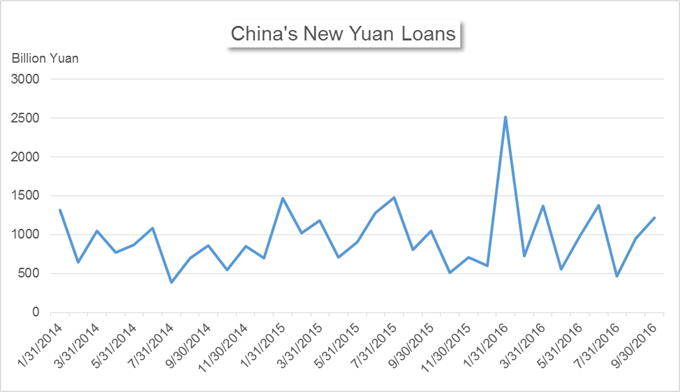 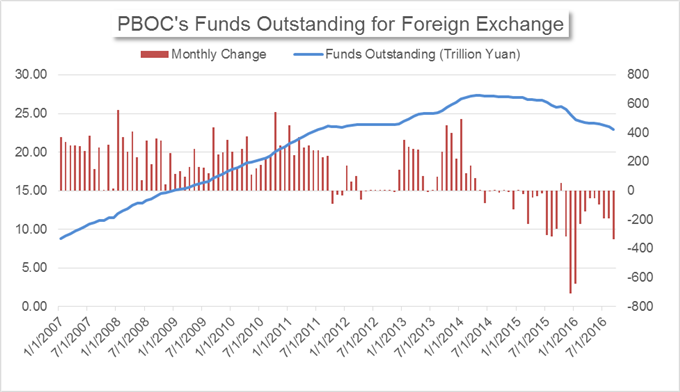 Looking forward, China will published the Third Quarter GDP print tonight, which is a primary driver for Yuan rates. The Chinese economy is mostly likely to remain a steady growth of 6.70% in the third quarter, the same as what was seen in the previous two quarters.

The full calendar can be found here

- China’s State Council approved a national strategy designated to promote the development of Northeast region. The region, once famous for its heavy industries, is in the middle of a crisis amid production cuts and increasing defaults. In the first half of 2016, the regional economy only expanded 2.2%, far less than the national growth of 6.7%. In specific, Liaoning province, one of the three provinces in the region, contracted -1.0% in the first half; this is the only Chinese province with a negative growth rate. As a result, the Central Government puts the region in focus and provides multiple supports.