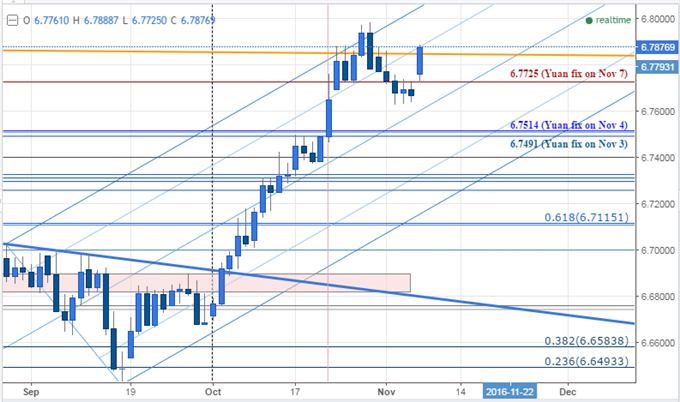 - The Yuan resumed losses against the U.S. Dollar on Monday following bounces in the last week.

- The Yuan dropped sharply against the U.S. Dollar on Monday amid the Dollar strength after the FBI told that it would not charge Hillary Clinton. The offshore Yuan saw a gap down on the open, with the USD/CNH gapping up 92 pips from the Friday close of 6.7669. Market participants widely expect that a victory for Mrs. Clinton will help to keep the Fed on track to raise interest rates in December. As of 10:50 am EST, the offshore Yuan has lost -0.19% against its U.S. counterpart.

On the same day, the PBOC weakened the Yuan by -211 pips or -0.31% to 6.7725 on October 7th, showing that the regulator continued to allow the Yuan to move in response to market pressures. Amid December Fed rate hike expectations, the Yuan may lose further against the Dollar.

Key Economic Indicators for the Yuan

- China’s foreign reserves dropped -$45.7 billion to $3.1207 trillion in October from the month prior, setting a new low since March 2011; this is the fourth consecutive decline in dollar-terms. In SDR terms, however, China’s foreign exchange holdings increased +3.0 billion SDR to 2.2715 trillion SDR. The mixed prints indicate that capitals may have been flowing out of China, but valuation effects also contributed to the sharp decline in China’s foreign reserves. In October, the Euro (EUR/USD), the Yen (USD/JPY) and the Pound (GBP/USD) have lost -2.2%, -3.6% and -5.2% respectively against the U.S. Dollar, which largely impacts the face value of China’s foreign reserves in Dollar terms.

Also, Chinese policymakers have shown incentive to promote a market-driven exchange rate regime, by allowing the Yuan to move in response to market pressures. This adds evidence to that the drop in foreign reserves is not resulted from supporting Yuan rates. Looking forward, China’s foreign reserves in Dollar terms may continue to decline amid the Dollar rally. At the same time, the PBOC has maintained its currency target – to keep the Yuan stable against a basket of currencies, rather than to the U.S. Dollar. This means that the regulator is less likely to burn foreign reserves to support the Yuan against the Dollar, while its foreign holdings are already declining. 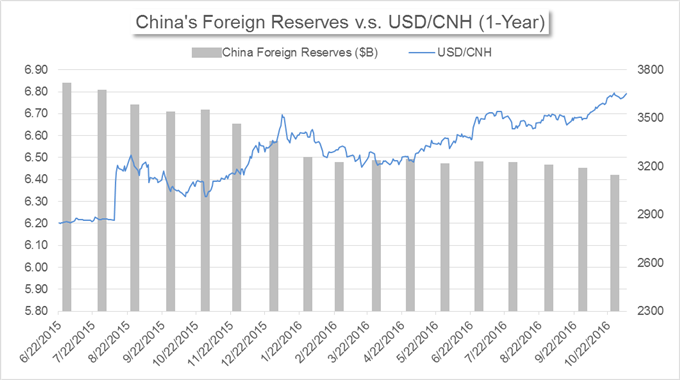 - China’s National People’s Congress (NPC) Standing Committee appointed Xiao Jie as the new Finance Minister, replacing Lou Jiwei who served in the position since March 2013. Mr. Lou will turn 66 next month; it is normal for Chinese officials to step down at the age of 65, though there are some rare exceptions such as the PBOC Governor Zhou Xiaochuan, who is 68. Chinese major media all spoke highly of Lou regarding his performance as the Finance Minister.

His replacement, Xiao, was previously the Deputy Finance Minister and the Director of the tax department. In the NPC’s announcement, there are three more minister-level officials have been replaced.

- Hong Kong government announced last Friday to introduce a 15% stamp duty on home purchases, except for first-time home buyers who are also Hong Kong residents. Normally, the tax ranges from 1.5% to 8.5%. The new rule is considered to be a move designated to curb the soaring property prices in the region, which are largely driven by mainland capitals. On Monday, housing shares in Hong Kong saw significant drops: New World Development, a real estate developer, plunged over -9%; Midland Holdings, a real estate agency fell more than -7%.