- The USD/CNH touched the highest level in over a month, amid no guidance from the PBOC.

- The borrowing cost of the offshore Yuan remains at a normal range on Wednesday.

- The offshore USD/CNH touched 6.6998 on Wednesday, the first time since August 28th. Chinese onshore markets are closed for a 7-day national holiday; as a result, the PBOC did not issue the daily reference rate, leaving no direct guidance on Yuan rates. The last daily fix issued by the Central Bank was 6.6788 on September 30th, more than 200 pips away from current levels of the USD/CNH. Despite the onshore markets are closed, the Chinese regulator may send out signals through other tools as the offshore Dollar/Yuan rate approaches the key psychological level of 6.70 once again.

Also, the Chinese currency has just joined the SDR basket officially on October 1st. One week before the inclusion, the PBOC steadied guidance on Yuan rates, indicating an intention for a smooth entry. 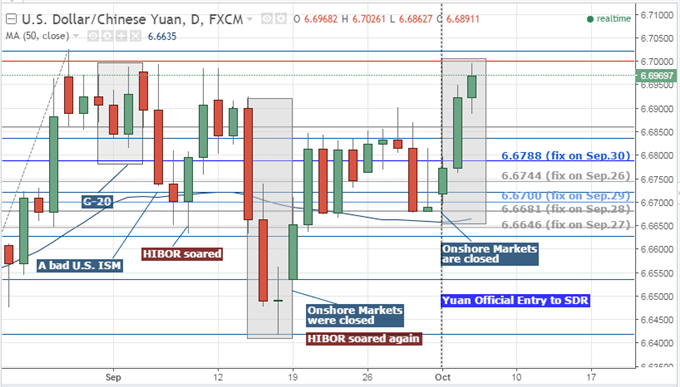 One key indicator to watch for a potential breakout of the key level is the offshore Yuan borrowing rate in Hong Kong, HIBOR. Around the 3-day holiday in mid-September, the overnight funding cost for the Yuan in the offshore market soared to the second-highest level in history; the USD/CNH dropped to the lowest level since August 19th. A larger HIBOR indicates a higher borrowing cost of shorting the Yuan, and thus, could drive the Yuan higher against its counterpart. The HIBOR O/N was 1.2915% on Wednesday, within a normal range. However, if a surge in the HIBOR is seen in the next few days, it may largely reduce the likelihood of the USD/CNH to break and hold above the key resistance of 6.70. 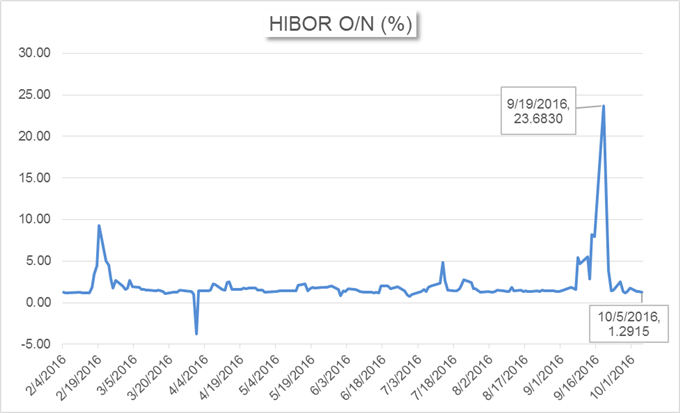 - Chinese onshore markets are closed for the national holiday. However, it does not slow down local governments’ pace to introduce tightened regulations on home purchases. From September 30th to October 3rd, 9 local governments of medium- to large-sized cities have launched new rules in the effort of cooling the overheated housing market. The rules include restrictions on a second-home purchase and on financing. During the long holiday, home sales will likely increase as people have additional time to visit available properties. This is another reason that regulators introduced the new rules during the holiday.

China’s housing sector is facing the increasing risk of price bubbles. Home purchasers and real estate developers have become the main group that want to borrow and spend in China. As a result, the Central Bank has put curbing the risk as a priority. Within such a context, additional easing measures are less likely to generate diversified investment or business expansion, but more likely to fuel bubbles in the housing sector.