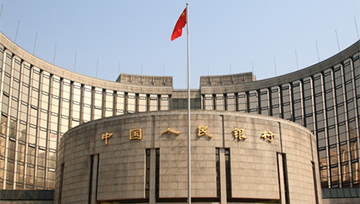 As of October 1st, the Chinese Yuan is officially included in the Special Drawing Right (SDR) basket, as the fifth primary reserve currency, with a weighting of 10.92%. The International Monetary Fund (IMF) announced the approval on November 30th, 2015, marking a milestone for the Chinese currency.

Central banks have already started to increase Yuan holdings as foreign reserves - on June 22nd, 2016, Singapore’s Monetary Authority announced it would include Yuan-denominated assets as part of its official foreign reserves. However, for traders and investors, the Yuan’s official reserve status could bring benefits in a different way. 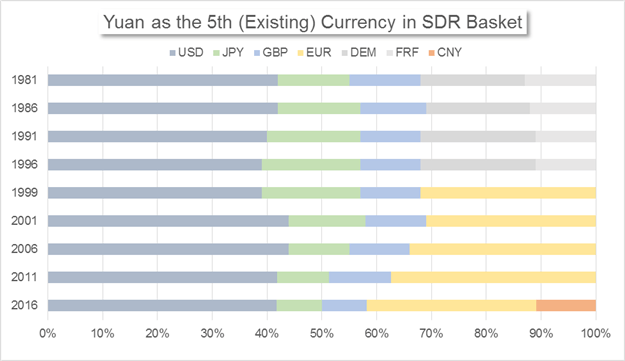 Data downloaded from the IMF; chart prepared by Renee Mu.

One of the most important advantages brought by the Yuan’s inclusion into the SDR basket is that the currency is legitimized and recognized as a safe and stable store of wealth by the financial world. Subsequently, trading volume in the Yuan is likely to increase as well, as access to the economy and popularity of its assets rise.

Let’s take a look at the evolution of the Yuan’s use. According to the Bank for International Settlements (BIS), information for USD/CNY trades before 2010 is not available. The BIS states that USD/CNY turnover for the period prior to 2013 may be underestimated due to incomplete reporting of offshore trading in previous surveys.

The lack of data and accuracy before 2013 may be caused by one of two reasons: A) the trading volume of the USD/CNY before 2010 may be so low that there is no need to account for it. B) There might be a descent amount of trading in the USD/CNY, but without enough recognition of the pair, it was not measured.

Now with the approval of SDR inclusion, the Chinese Yuan has become more recognized by the global banking community. In 2016, the USD/CNY has taken up 3.8% of the total trades measured by the BIS, rising from 2.1% in 2013; the weighting has exceeded that of the USD/CHF which is 3.5% in 2016.

The Yuan’s role in global payments and settlements has been rising as well. According to the Society for Worldwide Interbank Financial Telecommunication (SWIFT), the Yuan’s ranking for international payments has been increasing quickly: the Chinese currency has overtaken 6 currencies over the past three years. The most recent report from the SWIFT shows that the Chinese Yuan accounted for 1.86% of global payments in August; ranking it fifth after the U.S. Dollar, the Euro, the British Pound and the Japanese Yen - the other four currencies included in the SDR basket. 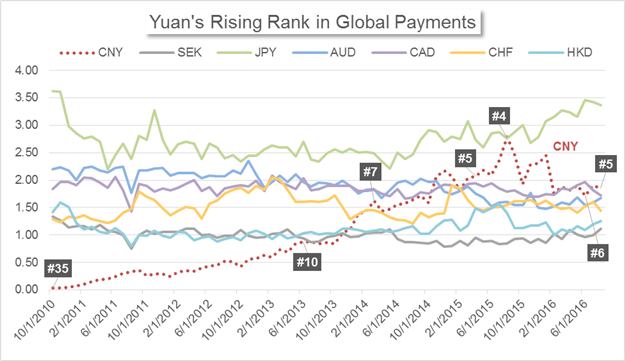 A report from Google Trends adds more evidence to the increasing popularity in the Dollar/Yuan exchange rate. The leading search engine evaluates how often a particular term is searched by worldwide users and gives it a rating from 0 (lowest) to 100 (highest). In the following chart, the search volume for ‘GBP to USD’ (same for ‘USD to GBP’) in May 2016 is set as the highest level and given a score of 100; this is likely driven by heated discussions before the Brexit referendum. Compare to the highest search volume, the amount of global users looking into ‘USD to CNY’ (same for ‘CNY’ to ‘USD’) was extremely low before 2010, and therefore was given a score of 0.

From the middle of 2010, the search volume for ‘USD to CNY’ started to pick up and has been gradually increasing over the following four years. Although the popularity in the USD/CNY is still relatively low compared to the established ‘major pairs’ - such as EUR/USD or GBP/USD - it has gained quickly. 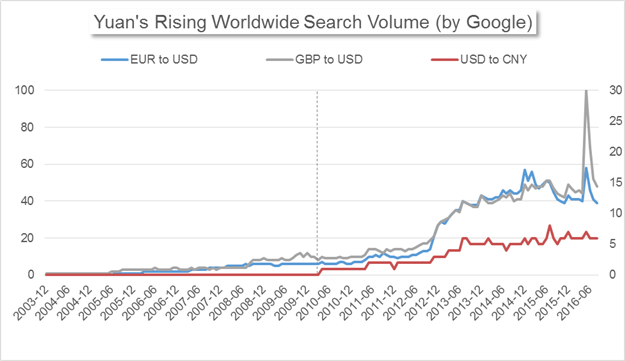 For traders, the increase in trading volume for Yuan pairs is good news. To learn about the various names of the Chinese currency and differences between onshore and offshore Yuan rates, read All About The Yuan.

The Chinese currency is not yet ‘free floating’. Onshore Yuan pairs are allowed to move within a certain range, determined by China’s Central Bank. The current trading band is 2% above or below Yuan’s reference rate, which is set by the Central Bank on a daily basis. For traders, the trend of the trading band may be more important than the level itself. 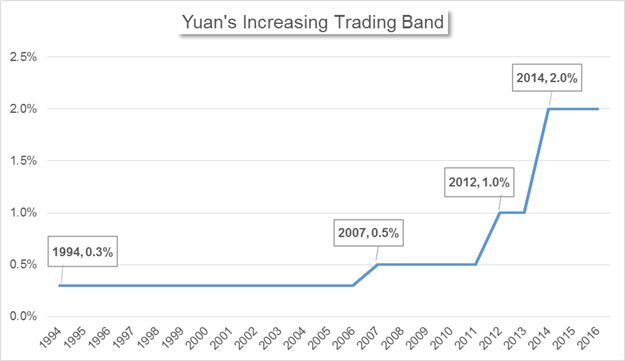 Data downloaded from The People’s Bank of China; chart prepared by Renee Mu.

A larger trading band means a higher level of maximum volatility. Traders will want to keep in mind that greater volatility may bring larger risks of loss as well as higher potential returns.

In addition to the broadening trading band, trading hours for Yuan rates have also been extended. Beginning on January 4th, 2016, China’s Central Bank has expandedthe onshore Yuan’s trading by additional seven hours, in the effort of facilitating traders in European and American time zones.