- Volatility in the Yuan fix saw significant increases after the Yuan was de-pegged against the U.S. Dollar, but it dropped this week.

- Dongbei Special Steel, a state-owned enterprise, failed to make payments on its bond on Monday, the ninth default this year.

- The railway cargo volume, a leading indicator for China’s economy, picked up for the first time in 32 months.

- The volatility in the Yuan’s daily fix set by the PBOC saw drops this week, ahead of the currency’s official SDR inclusion on October 1st.

Since the Yuan was de-pegged against the U.S. Dollar on August 11th, 2015, the volatility in the Yuan fix has significantly increased. This indicates that the PBOC allows greater flexibility in Yuan rates. Also, moves in Yuan fix are seen in both directions, as shown in the chart below. 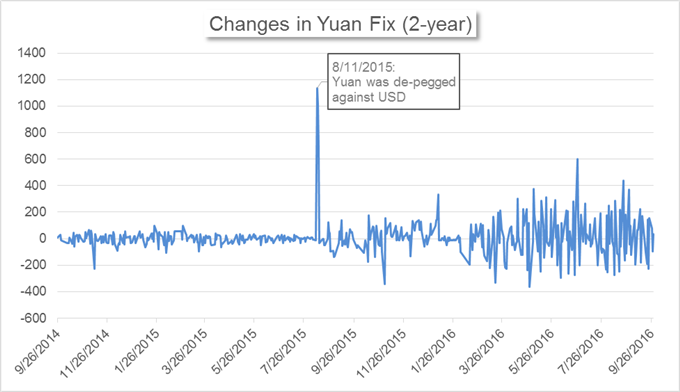 Over the past four months, 60% of the absolute value of changes in the Yuan fix were greater than 100 pips, which means that the fix either rose more than 100 pips or dropped more than 100 pips. However, as the Chinese currency heads into the final week before its entry to SDR basket, the volatility in the Yuan fix dropped again: Changes in the reference rate was +74 pips, -98 pips and +35 pips from Monday to Wednesday respectively. A positive change indicates a larger USD/CNY fix, and thus, a weaker Yuan. Yuan’s guidance this week may hint at the Central Bank’s intention to stabilize Yuan rates and prepare it for a smooth entry to the SDR basket. 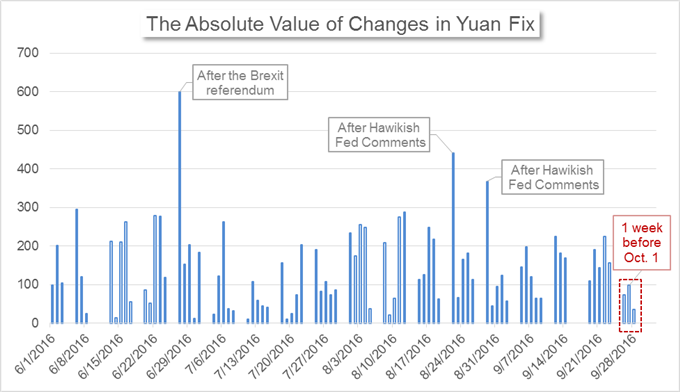 - Dongbei Special Steel, a stated-owned enterprise (SOE), missed its payment for a 744.1 million Yuan bond on September 26th, marking it the ninth default this year. The troubled producer is one of the companies in debt crisis around Northeast China, which used to be a major industrial base of the country. The local government, Liaoning Province, has step in and set up a special work group to guide the steel maker on debt restructure. With the support, the SOE may avoid bankruptcy but still face great challenges to reduce piles of debt.

- A member from the PBOC’s Monetary Policy Commission, Huang Yiping, addressed on China’s debt issue. He said that current debt levels of Chinese companies are high and the growth in household debt is rapid. In terms of industries, the mining and real estate sectors have the highest debt ratios. He also told that the country has not made substantive progress in reducing leverage yet; cutting productions as well as shutting down zombie firms may largely help on the issue.

- China’s railway cargo volume increased slightlyin August, up +1.0% to 279 million tons from a year ago; this is the first increase in 32 months. Railway cargo volume, electricity consumption and new Yuan loans are the three indicators that the Chinese Premier Li Keqiang uses in the effort of getting a more accurate picture of the broader economy. An official from China Railway Corporation, the county’s national railway operator, told that it is unsure whether the railway cargo volume has reached the bottom; the fourth-quarter prints may give out more clues.