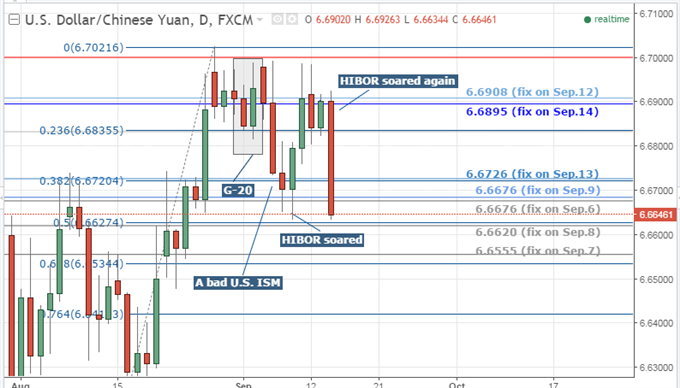 - The gap between growth in M1 and M2 narrowed slightly in August, though still at high levels.

- China’s Central Bank is preparing for a proposed trading link between Shanghai and London.

Despite the weaker Yuan fix on Wednesday, the offshore Yuan strengthened against the Dollar. Within one hour following the release of the fix, the USD/CNH dipped below 6.6726, the level set by the Central Bank a day ago. The offshore Yuan liquidity saw significantly tightened on the day, which may contribute to Yuan’s strength.

The overnight borrowing cost of offshore Yuan in Hong Kong jumped +5.3237% to 8.1617% on Wednesday, setting a new 7-month high. Since September 8th, the HIBOR O/N have seen significant increases. Among various theories to explain the uncommon rises, some said that that this could be a sign of China’s Central Bank to curb Yuan shorts; while, banks’ increased need in Yuan liquidity ahead of the long weekend may also be contributors. 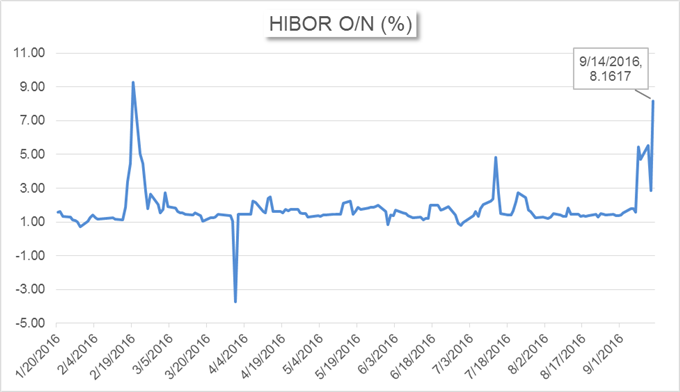 - The gap between the growth in China’s M1 and M2 narrowed to 13.9% in August from an all-time high level of 15.2% in July. However, the spread remains relative high, indicating there are still a large amount of companies and individuals that would rather hold cash than to spend it.

M1, a measure of monetary supply, covers liquid assets including currency in circulation and demand deposits. In August, M1 grew 25.3%, slightly lower than the 25.4% increase in the month prior. The broader measure of monetary supply, M2, includes all elements in M1 and saving deposits. In August, M2 rose 11.4%, higher than the 10.2% growth in July. As we discussed earlier, wide gaps between the growth in M1 and M2 seen in recent months result from a lack of investment opportunities. The August prints for fixed assets investment that came in yesterday are consistent with the money supply reads: more companies and individuals spent their money, including in investment; the growth in fixed assets investment stopped falling further. 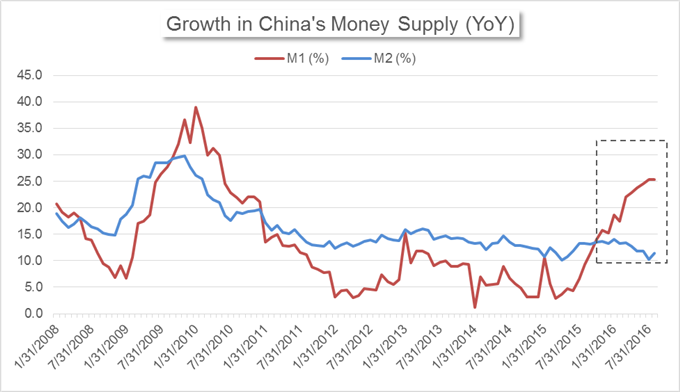 Another key economic data for China is the new Yuan loans. In August, Yuan-denominated loans rose 948.7 billion Yuan, more than double of the increase in the month prior. In specific, home loans rose 675.5 billion Yuan, taking up 71.2% of the total new lending. This means that a large portion of credit have flown into the real estate sector, which could fuel price bubbles. PBOC’s Chief Economist Ma Jun addressed the risk of price bubbles in the housing market on Monday. Despite the still-high home loans read, the condition in August may have eased slightly compared to the month prior: In July, new home loans took up 98.7% of the total new Yuan loans. 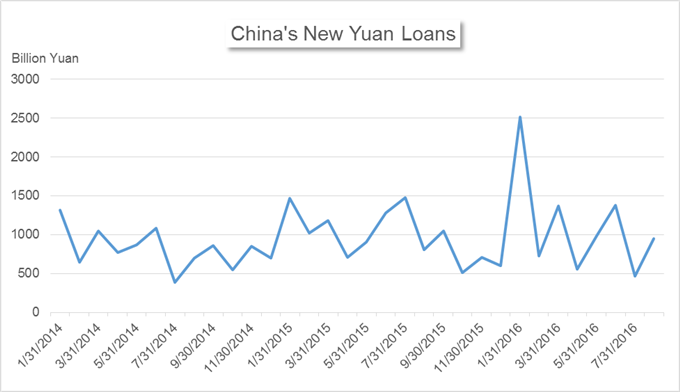 - PBOC's Chief Economist Ma Jun told on Wednesday that the Central Bank is preparing for the groundwork of a proposed trading link between Shanghai and London. He said that if the work on the stock connect scheme run into difficulties, PBOC and other regulators would act together to push forward it.A stock connect between Shanghai and London has been under discussion for a while. The Brexit referendum may have helped to speed up the process, as according to Richard Graham, the head of a British parliamentary committee on China relations, the UK has put a priority to strengthen links with mainland China and Hong Kong in the post-Brexit world.