Following broad weakness during the front-end of last week, the haven-linked US Dollar trimmed its losses. Geopolitical risks increased at the conclusion of the first partial week of 2020. USD’s strength extended into the ASEAN FX group as currencies such as the Singapore Dollar, Indonesian Rupiah and Malaysian Ringgit reversed some of their gains. This is as the Philippine Peso and even the Indian Rupee ended on a soft note.

As I often talk about in this series, these exotic currencies can at times overlook local economic event risk in favor of global themes that impact the flow of capital around Emerging Markets. For example. SGD did not pay much attention to Singapore 4Q GDP. Nor did PHP show much excitement on last week’s optimistic Philippine Markit manufacturing PMI report. Friday’s risk aversion was the dominant driver instead. 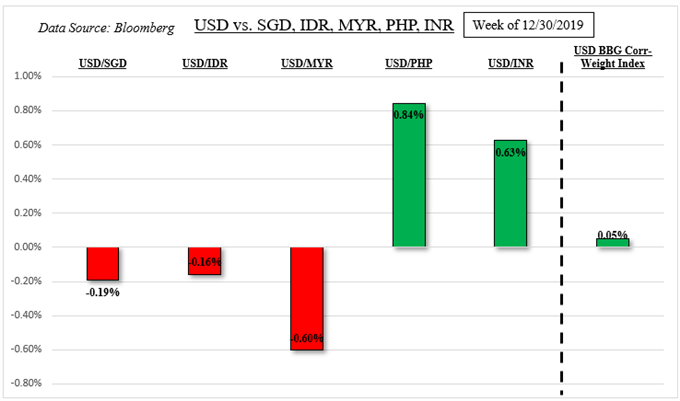 The cause of pessimism in financial markets stemmed from rising geopolitical tensions between the United States and Iran. This poses as a threat for broad sentiment going forward. In the early hours of last Friday, the former launched an airstrike in Baghdad, targeting and taking out key Iranian military figures. Regional instability and the threat of escalation caught investors off guard in illiquid trading conditions as oil rallied.

Iran has vowed “severe retaliation” as US President Donald Trump said that the country is willing to take any action “that is necessary” going forward. The latter added that measures were not to “start a war”. A reportedly false report of ballistic missiles hitting a US military base in Iraq temporarily sparked risk aversion towards the end of Friday’s session.

With the US deploying additional troops to the region as the risk of retaliation from Iran is elevated, escalating conflict could further dampen market mood. That would likely result in the Greenback pushing higher on average against the SGD, IDR, PHP and MYR. You can see the close inverse relationship between my ASEAN-based US Dollar index with the MSCI Emerging Markets Index on the chart below. 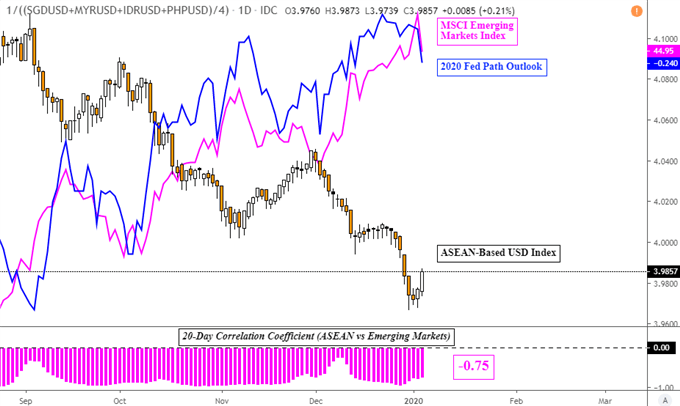 The focus for ASEAN FX in the near-term will thus likely remain on sentiment, though a handful of regional data will offer insight into economic health. On Tuesday, Philippine inflation data for December will cross the wires. Prices are anticipated to rise 2.0% y/y, up from 1.3% prior. That would mean hitting the lower end of the Philippine central bank’s 2-4% target.

The US Citi Economic Surprise Index has been aiming lower since topping in September and is once again in the negative zone. That shows data that is on average tending to disappoint relative to economists’ expectations. If this trend continues in local factory orders on Tuesday and December’s jobs report on Friday, sentiment could sour as risks about the health of the world’s largest economy increase.