The Singapore Dollar could be at risk as local manufacturing data showed a stark contrast between global and regional trends. While the currency tends to focus more on trends in sentiment rather than data, the underlying message is a concern. Singapore industrial production fell -9.3 percent y/y versus -0.8% anticipated in November. Month-over-month values were equally grim as output contracted -9.4% against -0.3% expected.

The former was the worst outcome in almost four years and we have not seen such a stark reduction in the latter since the end of 2010. Diving into the specifics, most of the contraction in output was derived from electronics, which shrunk -20.9%. These are a prominent chunk of exports. There was also weakness from biomedical, chemical and general manufacturing.

These were a bit of a surprise given the prominence of the external sector in Singapore and what has been a general improvement in business outlook following the US-China “phase-one” trade agreement. Looking at the chart below, the JPMorgan Global Manufacturing PMI is at its highest since April with an outcome of 50.3 in November. That is just above the neutral 50.0 outcome that represents neither growth nor contraction.

In 2017, exports total about 188% of Singapore GDP. In fact, according to the Observatory of Economic Complexity, about 80% of goods that departed the city-state stayed within Asia. With that in mind, if the contrast between output and PMI surveys continue, it could speak to underlying fundamental weakness. That may come back to bite regional sentiment and SGD as trade talks enter a more difficult stage ahead.

Learn more about how the MAS conducts monetary policy and what matters for the Singapore Dollar ! 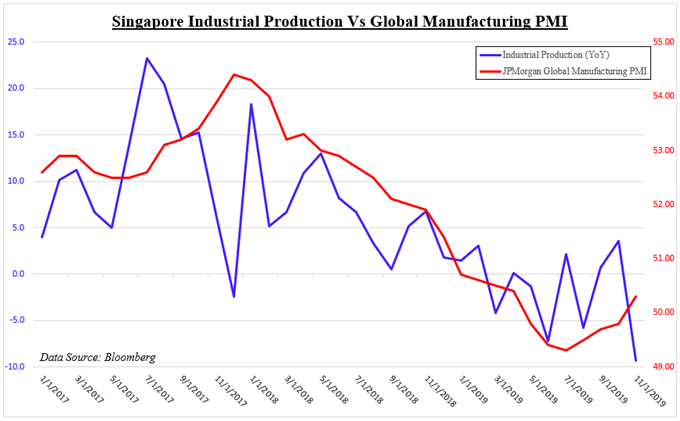 USD/SGD remains trading within a narrow range between support and resistance. The latter is a psychological barrier between 1.3558 and 1.3569 while the former at 1.3512 to 1.2520. The technical bias still appears to favor the downside though after the currency pair took out rising support from earlier this year – blue line on the chart below. Guiding USD/SGD lower is also descending resistance from early October. 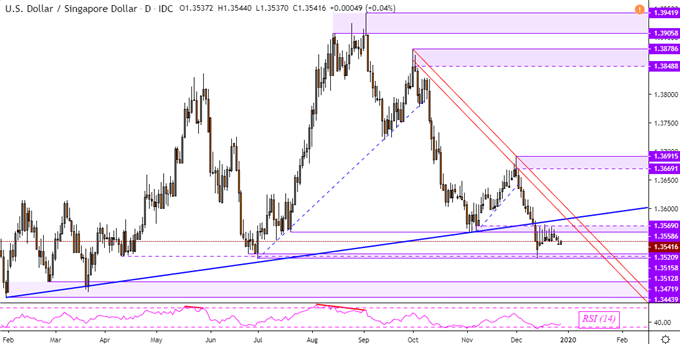