The Singapore Dollar and MAS: What is SGD and How to Trade it?

This is a special report offering an overview of Singapore Dollar and the Monetary Authority of Singapore (MAS); the island city-state’s central bank. It will cover what matters for SGD when comparing it to some of its currency counterparts and how to trade USD/SGD.

Trade all the major global economic data live and interactive at the DailyFX Webinars.

Singapore Dollar and the MAS

The SGD is the official currency of Singapore which was adopted in 1967. Initially, the Singapore Dollar exchanged at par to the Malaysian Ringgit until 1973. Then, it was pegged to the British Pound followed by the US Dollar for a brief period of time.

From the early 1970s through 1985, the SGD was being managed against an undisclosed basket of currencies. Afterwards, it transitioned to trading within a proscribed price band. These tasks were and are handled by Singapore’s central bank, the Monetary Authority of Singapore (MAS), which was established in 1971.

Monetary policy is arguably the most important fundamental aspect to analyze the in determining currency price trends. In its modern iteration, it is typically conducted by an independent central bank, free from near-term political noise, that focuses on a nation’s economy by adjusting interest rates to maintain appropriate levels of inflation.

Changes in borrowing costs define the return on owning - and thereby the appeal - of currencies trading on foreign exchange markets. However, unlike other central banks, setting and adjusting target short-term rates is not part of the Monetary Authority of Singapore’s toolbox. So, what should traders focus on when trading the USD/SGD?

Before understanding why setting benchmark lending rates is not an objective for the MAS, one ought to consider Singapore’s economy. According to the International Monetary Fund, the Republic of Singapore ranked 36th in the world when looking at gross domestic product in nominal terms. It is also one of the richest in Asia (in terms of GDP per capita) and one of the world’s major financial centers.

The island city-state and its free-market economy rely heavily on trade. According to data from The Economist, exports totaled about 188% of Singapore’s GDP in 2014. Meanwhile, imports accounted for 163% of it. Subtracting the latter from the former gave you a trade surplus that consisted of a whopping 25% of overall output (in addition to consumption, investment and government spending).

To put this into perspective, in the same year net exports took away 3% of GDP in the United States, a largely consumer-oriented economy. In Australia, it was more-or-less flat. Looking at some of Singapore’s neighbors, in Indonesia the trade balance was also flat when looking at how much it impacted GDP. In Malaysia, net exports subtracted 3% from growth.

With that in mind, a high dependency on trade means that the Singapore Dollar’s fluctuation in foreign exchange markets can have a significant impact on the economy, all else being equal. This is because a cheaper currency makes exports more competitive while one that is dearer risks sending potential buyers to other less-expensive countries. 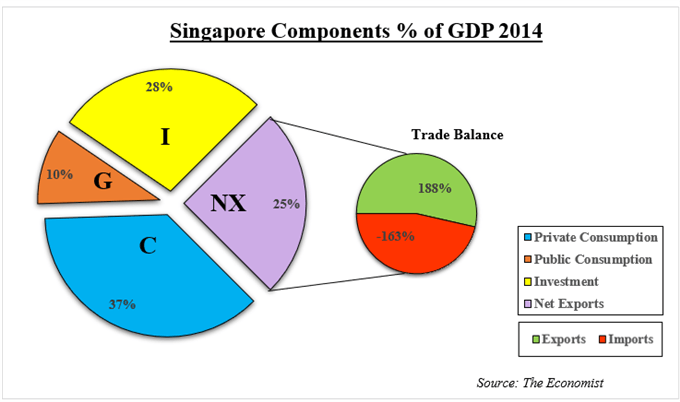 For the Monetary Authority of Singapore (MAS) to tame inflation and manage the economy most effectively, it resorts to actively managing its currency. At the same time, it must allow for the free flow of capital in and out of the nation given Singapore’s reliance on the external sector. As a result, it must give up the ability to set benchmark lending rates as an independent authority. This is because of the so-called impossible trinity.

In short, the impossible trinity is an economic trilemma that all nations face. Given a choice between three policy objectives: a fixed exchange rate, free capital flows and an independent central bank, a country can choose to have no more than any two at a given. Simultaneously pursuing all three is inherently self-defeating and risks bringing about financial and economic instability, such as during the 1997 Asian Financial Crisis.

Back then, ASEAN countries such as Thailand were hit hard by capital outflows which caused central banks to spend foreign exchange reserves to maintain their currency pegs against the US Dollar. Before the crisis, Thailand set higher interest rates relative to the US to combat inflation. Higher interest rates, all else being equal, make a currency more attractive as an investment and can lead to appreciation.

Initially this worked because the Bank of Thailand purchased foreign exchange reserves with local currency in the markets to prevent the Thai Baht (THB) from rising too much. However, when the flow of capital quickly reversed during the crisis, the central bank had to spend reserves to maintain its fixed exchange rate regime. After stockpiles were depleted, there was no ammunition left to combat selling pressure. THB fell as much as 140% after it was allowed to devalue.

Dive into the basics of trading emerging markets currencies 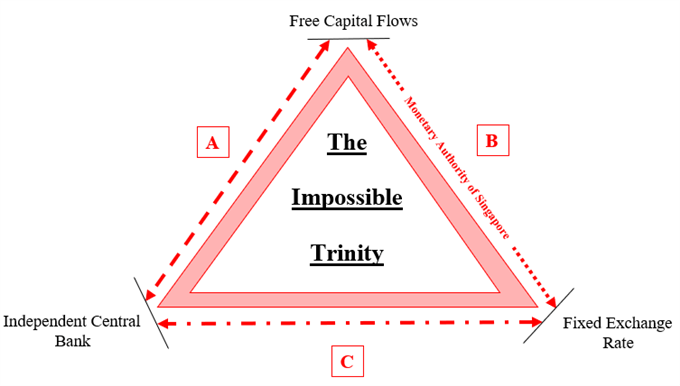 Focusing our attention back to the MAS, the objective of the monetary authority is to manage the trade-weighted exchange rate index (TWI) in order to stabilize inflation and sustain growth in the economy. As mentioned earlier, this also entails closely overseeing their foreign exchange reserves as a result of its mandate, which is enshrined in the MAS Act.

To achieve it, the MAS focuses on managing the Singapore Dollar against a basket of currencies rather than a peg that is tied to a particular one such as the US Dollar or Euro. Another word for the TWI is the Singapore Dollar Nominal Effective Exchange Rate (S$NEER). The basket of currencies that composes this index is undisclosed, but it likely depends on the importance of trade with a nation.

Using the S$NEER and managing how much the index is allowed to fluctuate helps drive the Singapore Dollar against its currency counterparts. Its relative value also impacts inflation in Singapore. As the currency gains, it should help slow the pace of local price growth because a dearer SGD makes imports cheaper. On the next chart below is an example of the S$NEER from the April 2019 MAS policy statement.

Unlike central banks such as the US Federal Reserve, which have specific inflation targets like 2% in the medium-term, the MAS focuses on achieving a core CPI rate of just under 2%. Singapore’s core inflation is unique from other nations in that prices of food and energy are included. But what is excluded are the costs of accommodation (imputed rent) and private road transport.

For fundamental and technical updates on the Singapore Dollar and its ASEAN peers, you may follow me on Twitter here @ddubrovskyFX 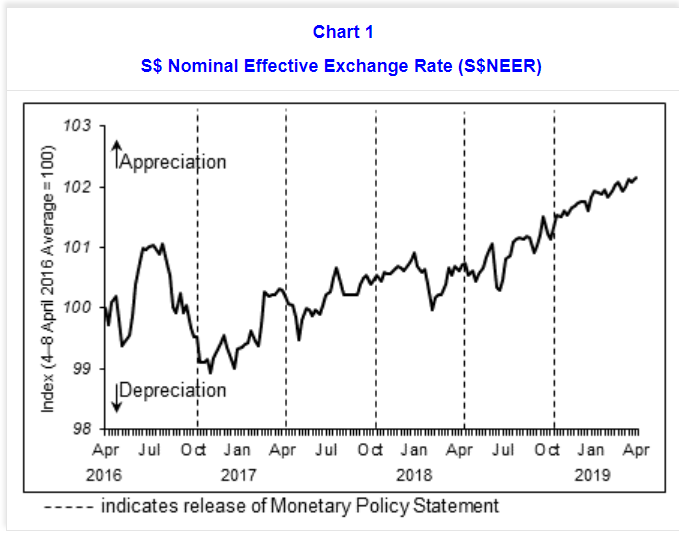 Finally, let’s take look at an example of how the Singapore Dollar reacted in the past to adjustments in the TWI. MAS monetary policy announcements are typically released twice a year, once in April and another in October. This makes it one of the less-frequently reporting central banks, and this could be used to one’s trading advantage to help develop and focus on medium-term outlooks.

In April 2010, the Monetary Authority of Singapore shifted the exchange rate policy band from 0% appreciation to that of modest and gradual gains. On the weekly USD/SGD chart below, the pair dropped over 7.5% (indicating Singapore Dollar rising against its US counterpart) until the MAS policy statement in October of 2011.

There, the monetary authority, while keeping gradual appreciation of the Singapore Dollar, the slope of the policy band was reduced amidst expected moderation in core inflation. Following this announcement, you can see on the chart that the decline in USD/SGD gradually weakened. Then, there was a dramatic depreciation in the Singapore Dollar in the latter half of 2014 and early 2015. 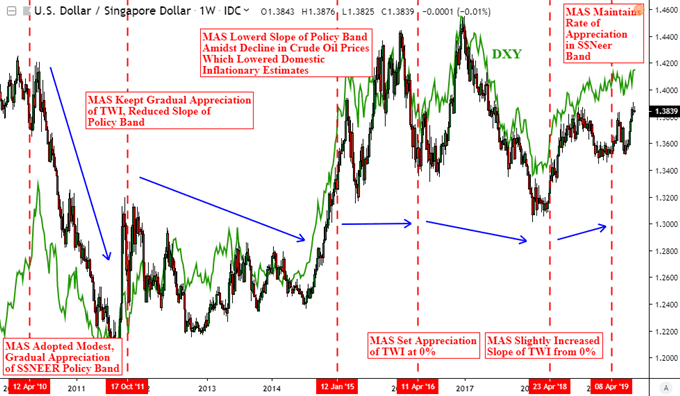 This was during the collapse in crude oil prices from over $100 per barrel to under $50, and this lowered local inflationary expectations so much that the MAS had a surprise meeting in January (outside of the normal twice-per-year scheduled). The monetary authority ended up further reducing the slope of the policy band, while still maintaining a modest and gradual appreciation of the Singapore Dollar.

While the SGD weakened against the US Dollar, the MAS noted that gains against the Malaysian Ringgit, Euro and Japanese Yen helped to offset the Greenback’s overall solid performance. This underpins that the MAS watches the Singapore Dollar’s price action against a basket of currencies, not just the US Dollar. Even so, at times it seems that the USD/SGD carefully follows the DXY(US Dollar Index).