US Dollar Could Gain Versus SGD, PHP, IDR on World Trade Tensions

Last week was a relatively quiet one for the US Dollar when comparing it to some of its major counterparts. The same could not necessarily be said about its performance against ASEAN FX, where there was cautious weakness in the Singapore Dollar, Indonesian Rupiah and Malaysian Ringgit. USD/SGD advanced higher despite better-than-expected Singapore industrial production figures.

As anticipated, the focus for some of these exotics remained on tense developments in US-China trade talks. The latter expressed its displeasure after US President Donald Trump signed the Hong Kong Bill. Specifics of possible countermeasures from China were absent, but they reiterated threats of retaliation. The Thanksgiving holiday in the US made for lower levels of liquidity, amplifying volatility. 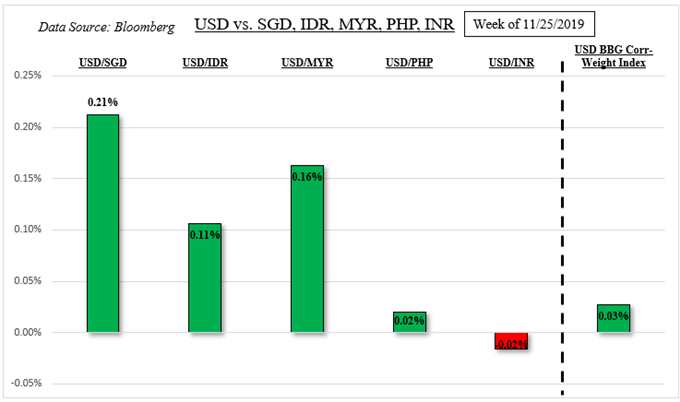 Heading into the last month of this year, the inverse relationship between my ASEAN-Based US Dollar Index and the MSCI Emerging Markets Index remains fairly strong. Although the 20-day rolling correlation coefficient has weakened slightly from -0.88 to -0.73. A value closer towards -1 implies perfect inverse trading dynamics.

Over the past 24 hours, we saw broad-based US Dollar weakness on a combination of upbeat Chinese and downbeat US manufacturing ISM data. That sent US front-end government bond yields lower as the Greenback weakened across the board. But, there are worrying developments on the global trade war front that threatens the Philippine Peso, Malaysian Ringgit, Indonesian Rupiah and Singapore Dollar.

The December 15 tariff deadline is looming and we could see Trump push higher levies against China. The latter wants to see the former begin rolling back tariffs, a commitment Washington has shown reluctance to agree on. This is as recent developments show what could be escalating tensions across the Atlantic Ocean after the USTR proposed raising $2.4b in levies against French goods over digital taxes.

These are fundamental risks that could catalyze breakouts to the upside seen in USD/SGD, USD/MYR, USD/PHP and USD/IDR down the road. 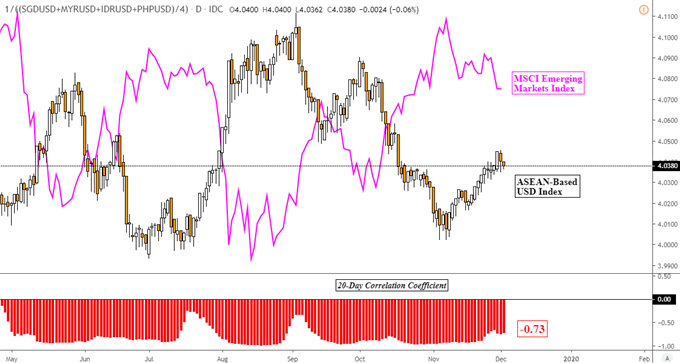 Focusing on the regional docket, the Philippine Peso may weaken on upcoming inflation data. On Thursday, local CPI is expected to print 1.2% y/y for November, up from the 0.8% outcome last month. The country has been experiencing disinflation since the latter half of 2018. A softer outcome may compel the Philippine Central Bank to ease this month, as Governor Benjamin Diokno alluded to last week.

The US Dollar will be specifically eyeing November’s jobs report at the end of this week. The country is expected to add 190k and 40k non-farm payrolls and manufacturing positions respectively. Data has been tending to disappoint relative to economists’ expectations as of late. A similar softer outcome could push bond yields lower, perhaps dragging the Greenback with it absent a “risk-off” mood in financial markets.