The anti-risk Japanese Yen may gain as the sentiment-linked Australian Dollar sinks after the Office of the United States Trade Representative (USTR) proposed about $2.4b tariffs on French goods. This is a response over the latter’s digital tax on US businesses such as Google, Apple and Amazon. USTR Robert Lighthizer also announced that the country is considering similar probes on Turkey, Austria and Italy.

This comes as the US-China trade war remains unresolved in a fragile state of global growth. Officials from the former have been touting that progress is being made while the latter has been frequently hesitating to express similar dynamics. Last week, China expressed its displeasure to President Donald Trump signing the Hong Kong Bill. It also wants to see the US begin rolling back tariffs as part of a “phase 1” trade deal.

Escalating tensions across the Pacific and what may become beyond the Atlantic would likely throw in further uncertainty into the mix for business investment. During Monday’s US trading session, local ISM Manufacturing PMI printed 48.1 in November versus 49.2 expected and from 48.3 in October. This may also raise concerns about manufacturing jobs after the country lost the most since 2009 last month.

US Commerce Secretary Wilbur Ross underpinned Trump’s pledge to raise Chinese tariffs on December 15 in the event “nothing happens between now and then”. It is thus not surprising to see the S&P 500 and Dow Jones Industrial Average decline 0.86 and 0.96 percent respectively on Monday. Aggressive risk aversion sent investors flocking to Treasuries as government bond yields declined across the board.

S&P 500 futures are pointing notably lower heading into Tuesday’s Asia Pacific trading session. This could spell a continued dose of risk aversion. That may reverse some of the upside progress seen in the sentiment-linked Australian and New Zealand Dollars on Monday. The focus for AUD and NZD seemed to be on broad US Dollar weakness yesterday as local bond yields fell.

AUD/USD will also be awaiting the last RBA rate decision of this year, due later today at 3:30 GMT. Markets are not envisioning a cut, but overnight index swaps are pricing in about a 60 percent chance of one in February. Meanwhile, a deterioration in market mood would likely fuel the anti-risk Japanese Yen higher against its major counterparts.

Join me at 3:15 GMT as I cover the RBA rate decision and outlook for the Australian Dollar!

USD/JPY rejected resistance (109.49 – 109.72) following the presence of negative RSI divergence. That showed fading upside momentum which can at times precede a turn lower. This left the currency pair facing rising support from August – red parallel lines on the chart below. A daily close under this psychological barrier with confirmation opens the door for a reversal of the dominant uptrend. 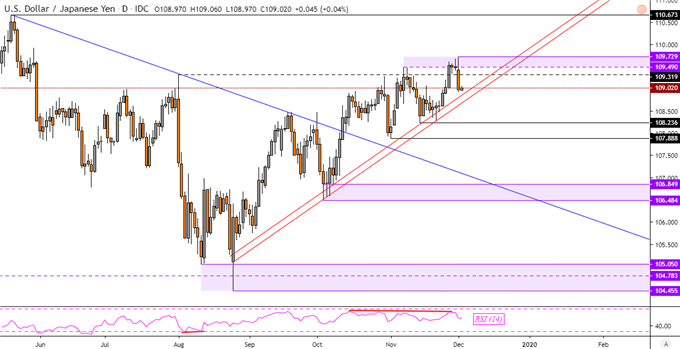