The anti-risk Japanese Yen is gaining and may extend its rise into Thursday’s Asia Pacific trading session after US President Donald Trump signed the Hong Kong Human Rights and Democracy Act. This is a bill that requires the US to conduct yearly reviews into the autonomy of the city-state. China has expressed its displeasure to this law and markets are now awaiting potential countermeasures which could include tariffs.

The sentiment-linked Australian Dollar and New Zealand Dollar weakened alongside S&P 500 futures, putting the record highs US stocks achieved Wednesday into question once trading resumes after the Thanksgiving Holiday. Wall Street has been on a remarkable ascent, largely fueled by speculation of a US-China trade deal ahead of the December 15 tariff hike deadline. USD/JPY, AUD/USD and NZD/USD fell. 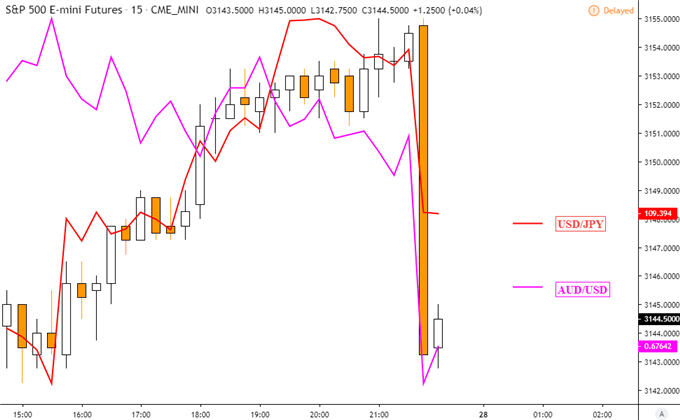 Over the past 24 hours, the focus turned to US economic news where better-than-expected US GDP data fueled optimism in financial markets. This is as softer-than-expected PCE figures – the Fed’s preferred measure of inflation - underpinned the central bank’s “appropriate” stance on current monetary policy settings. The US Dollar gained alongside rising bond yields.

Meanwhile, the British Pound outperformed after a key poll from YouGov predicated that the UK Conservative Party could claim a 68-seat majority at next month’s General Election. Such an outcome would make passing Prime Minister Boris Johnson’s Brexit Deal relatively easier compared to a hung Parliament. The latter would produce further uncertainty.

With US markets going offline tomorrow, liquidity is thinning up which is a natural recipe for market volatility. As such, Asia Pacific markets are bracing for what could be aggressive risk aversion as S&P 500 futures point noticeably lower. The focus for foreign exchange markets will thus likely be on risk trends. As such, we may continue seeing the USD/JPY, AUD/USD and NZD/USD extend their decline.

These developments have undermined USD/JPY’s upside push through key resistance at 109.49. The pair is aiming lower alongside negative RSI divergence which shows fading upside momentum. That could translate into a turn lower towards rising support from late August – red lines below. Further downside progress would expose 108.23 and then 107.88. 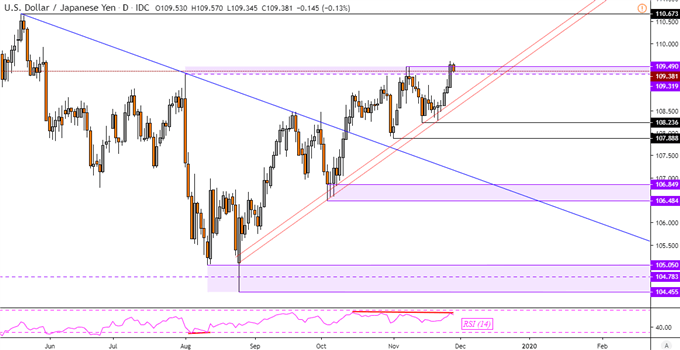