The Norwegian Krone and Swedish Krona are expected to be the most volatile G10 currencies this week with optons-implied volatilities of 7.68 and 7.70, respectively. A slew of key economic indicators out of the US, EU and China will provide a clearer outlook of global growth which may weigh on export-driven Nordic FX. For the Krona, the primary event risk to monitor will be the Riksbank rate decision and outlook for monetary policy.

At the G20 summit in Osaka, Japan, world leaders convened to discuss global challenges, though the main point of focus was between the US and China. Both parties managed to agree to a trade war truce and are re-approaching the negotiating table in an effort to reach a trade deal. While the economic ceasefire has boosted sentiment, it is unclear how long it will last given that the fundamental outlook remains bleak. 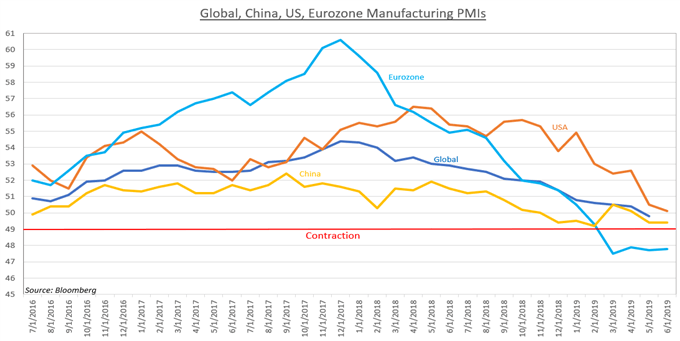 Throughout the week in the US, markets will be preparing for the release of key economic data. This includes the publication of the ISM manufacturing index, trade balance and non-farm payrolls. Forward-looking data may induce high levels of volatility in light of the US’s waning economy. Since February, US economic data has been tending to underperform relative to economists’ expectations.

The prevailing weakness has not gone unnoticed. The dovish pivot from the Fed is perhaps the biggest validation and official recognition that the US economy is showing increasing fragility. The publication of last week’s poor GDP data fell in line with this trend and led to increased rate-cut expectations from the Fed. Overnight index swaps are currently pricing in a 100 percent probability of a slash at the July meeting.

In Europe, EU leaders continue to debate who will preside over key institutions including the European Central Bank, European Council and European Commission. Following the 2019 European parliamentary elections, the legislative branch was left fragmented and resulted in a fractured approach on how to best fill these key positions.

Like in the US, the EU will also be publishing key economic indicators that may provide better insight into the health of one of the largest global economies. Some notable indicators include manufacturing PMI, the unemployment rate and German factory orders . Following the ECB’s meeting in Portugal, investors will be eyeing European data very closely to see whether it will sway policymakers to cut rates soon than expected.

The ongoing budget dispute between Italy and Brussels will be reaching a critical point this week. On July 2, the executive arm of the EU – the European Commission – will weigh in on whether it wants to open a disciplinary procedure known as the Excessive Deficit Procedure (EDP) against Italy. Such a move would be a first for Brussels, and the penalties could push the third largest Eurozone economy to the brink of collapse.

In addition to monitoring US-China trade relations, crucial forward-looking economic data will be published. The most recent reading of manufacturing PMI showed a contraction which may cast a shadow under which all other indicators will fall under. Since the trade war began, China’s economy has been showing increased weakness and its deteriorating growth prospects are unnerving Beijing’s biggest trading partners.

The outward-looking Nordic economies will be watching all of the major external event risks outlined above – especially the Norwegian Krone. The economic docket in Norway remains relatively sparse which leaves NOK vulnerable to counter-currency risk. Furthermore, the Krone’s link to crude oil prices make it particularly vulnerable to oscillations in global sentiment, particularly during politically and economically fragile times.

Here are two of the main indicators to keep an eye on:

On the other hand, the Swedish Krona will likely experience a significantly more volatile week. In addition to the release of manufacturing PMI, the Riksbank will be announcing its rate decision and outlook on monetary policy. Since most analysts are expecting for the central bank to hold rates, most of the violent price moves will likely come from commentary on the trajectory of monetary policy.

In December, central bank officials raised rates for the first time in seven years and planned another in March. Well, the first quarter has come and gone, and with each passing month, global growth prospects continue to erode the case for raising rates in an economy that is driven by world demand. However, maintaining ultra-low rates is also itself creating financial risks, one of which may be a hidden monster waiting to wake up.