EURUSD will be eyeing the release of a slew of US and European PMI data publications as both powerhouses show ever-increasing weakness. The ECB’s recent meeting in Sintra, Portugal revealed that officials are ready to cut rates and re-introduce QE if economic conditions warrant such an action. The Fed struck a cautiously more dovish tone at the most recent meeting with more policymakers noe broadly tilting towards two cuts by year-end.

In both the Eurozone and US, economic data has been tending to underperform relative to economists’ expectations – particularly the latter. It will therefore be of little surprise if today’s PMI data falls in line with this trend which may in turn strengthen the case of doves. Both economies are also suffering from a plight of political uncertainty that is yet another weight which continues to pressure markets.

In the US, the upcoming G-20 summit in Osaka, Japan will be a key event to monitor because it is also when US President Donald Trump and his Chinese counterpart Xi Jinping are expected to meet and have “extended” talks on trade. Washington’s unpredictable political maneuvers in the trade war have repeatedly caught markets off-guard and caused severe volatility. With the 2020 election coming up, Trump’s tactics may change.

Want to learn about how to trade political risk? Be sure to follow me on Twitter @ZabelinDimitri.

In Europe, the battle of the budgets between Rome and Brussels continues with the dreaded Excessive Deficit Procedure (EDP) now looming over the horizon. The spread between Italian and German 10-year bond yields remains over 100 percent higher than they were 14 months ago. This may widen as Eurozone debt crisis concerns mount in light of the news that the Italian economy may suffer a contraction in Q2.

Furthermore, policymakers are divided on who to elect to reign over key European institutions. These include the ECB, European Council (EC) and European Commission. On June 20, Council President Donald Tusk announced a new summit to take place on June 30 since no consensus was reached on a particular candidate. Commission President Jean-Claude Junker warned that efforts to reach an agreement will be “tough”.

After breaching an 18-month resistance, EURUSD retreated but was then provide a tailwind from the FOMC meeting, prompting causing the pair to retest the previous breakout. General US Dollar weakness was the primary driving force rather than a sudden influx of capital into the Euro. However, if regional and global risks escalate, a premium may be put on liquidity, and investors may then start flocking to the US Dollar, consequently pushing EURUSD lower.

CHART OF THE DAY: WILL EURUSD BREAKOUT LAST? 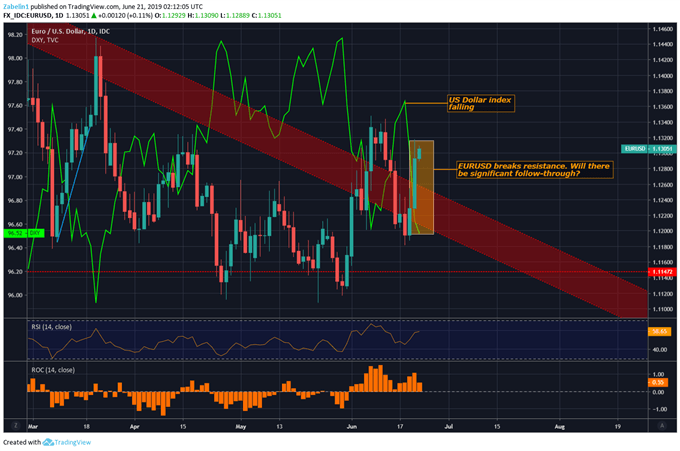