AUD and Stocks Up on US-China Trade War Truce, But for How Long?

The Australian and New Zealand Dollars along with S&P 500 rallied early into Monday’s trading session after the G20 summit in Osaka, Japan. US President Donald Trump met with his Chinese counterpart Xi Jinping. Both leaders agreed to an economic ceasefire and have returned to the negotiating table. Markets rejoiced on the news and it led to a surge in risk appetite and a wave of capital inflow into cycle-sensitive assets. 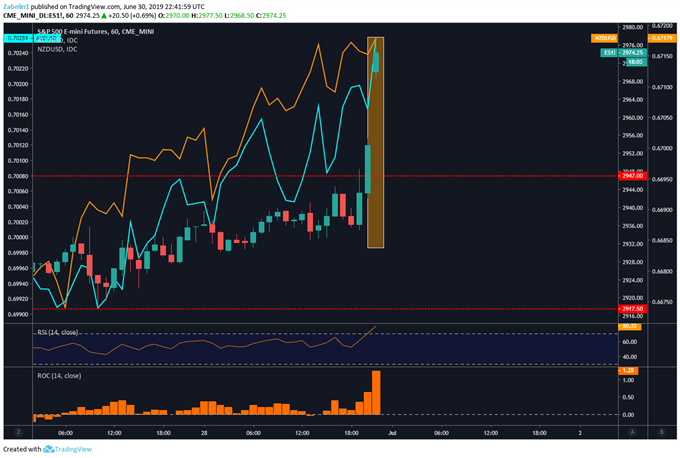 However, investors may find it prudent not to get overly excited. Both parties still have to find a way to reconcile fundamental differences and reach a consensus. Unless an agreement can be reached, Beijing risks enduring a tariff on $300 billion worth of Chinese goods. Were this to occur, China would almost certainly retaliate with its own tariffs against the US and could force Chinese officials to use other leverage.

In a best-case scenario, if US-China trade tensions are reconciled and a deal is made, it will not likely occur quickly or easily, and markets may find themselves exhaustively oscillating between risk aversion and optimism. Furthermore, the fundamental outlook still remains bleak with global PMIs showing increasing weakness and central banks halting or reversing their rate hike cycles.

Short-term optimism may be amplified by the recent meeting between Trump and North Korean Leader Kim Jong-Un. Both parties are going to restart nuclear negotiations, with the US President saying he is willing to invite Kim to Washington. The anti-risk Japanese Yen’s suffering will likely be extended as a result of what appears to be a temporary defusing of nuclear tensions. However, Washington’s sporadic nature when it comes to policy will still keep traders on their toes.