The Euro may be on its toes ahead of the release of German unemployment data and Italian manufacturing confidence. The former carries significant weight because of Germany’s role as a powerhouse for local regional economic activity, and the latter because of Italy’s precarious growth prospects. In addition to revising its GDP outlook down, Italy may now incur a fine of up to $4 billion after violating EU budget laws.

Around the same time, the ECB will be publishing its semi-annual Financial Stability Report which will highlight potential vulnerabilities in the Eurozone financial system. This will be supplemented by commentary from ECB Vice President Luis de Guindos. Market participants will be eager to tune into this especially in light of the atmosphere-puncturing rise in Italian 10-year bond yields and fears over solvency issues.

Furthermore, the ongoing debates in the European parliament over who will replace leaders in key EU institutions will continue to be a point of focus for Euro traders. Positions in the European Council, ECB and European Commission are up for grabs, and the uncertainty over who will take over gives plenty of reasons for Euro traders to worry, especially in light of the Eurozone’s economic performance for the past few months.

The Swedish Krona will likely experience higher-than-usual volatility after local GDP data is published. Quarter-on-quarter is expected to show a 0.2 percent growth print – one percent lower than the previous quarter. Year-on-year GDP growth is forecasted to show 1.7 percent growth, a downgrade from the prior report at 2.4 percent.

This follows the Riksbank’s recent publication of its financial stability report. The paper outlines how “High indebtedness among the households in relation to earnings and assets poses risks to both macroeconomic development and financial stability”. Ultra-low rates are appealing to borrowers because the cost of taking on loans is comparatively small and therefore incentivizes taking on higher levels of debt.

However, borrowers with mortgages and households in general with larger debts face the risk of having to endure paying higher levels of interest once the Riksbank begins its rate hike cycle. The Swedish financial system in this regard is vulnerable to a sudden change in credit conditions, and with rates already in negative territory, the central bank is limited in its ability to mitigate an economic downturn.

Despite laying out a plan to hike rates in the latter half of the year, it is unclear whether the prevailing economic conditions domestically and in Europe will be sufficiently strong enough to allow the central bank to raise rates. If it does so prematurely, it risks cooling an already-tepid economy and increases the probability of a recession.

CHART OF THE DAY:ULTRA-LOW RATES MAY POSE RISK TO FINANCIAL STABILITY 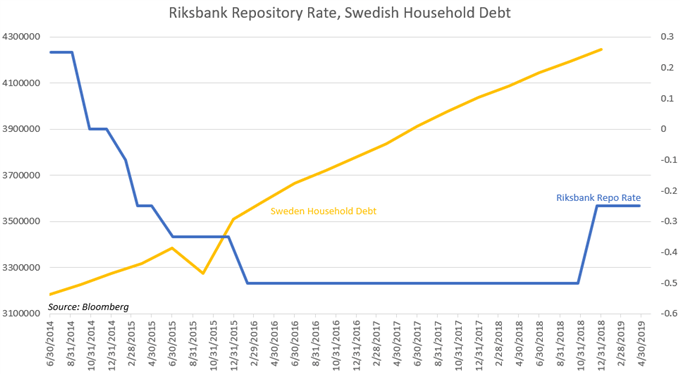