HOW WILL SEK, NOK, BE IMPACTED BY US-BASED EVENT RISK?

Apart from today’s release of manufacturing PMI out of Sweden and Norway, the Scandinavian countries’ economic dockets remain relatively light for the rest of the week. Consequently, this leaves the Krona and Krone exposed to local event risk from whichever currency it is paired with. USD/SEK and USD/NOK traders will therefore likely be watching out for some of the following key US data publications:

Later today, UK lawmakers will be holding another round of votes on various Brexit proposals with a hope of finding common ground and agreeing on a deal before the April 12 deadline. If no deal is reached, it could result in a no-deal Brexit and would likely rattle European and global markets and cause capital flight from the export-driven Krona and Krone and send traders into the arms of the anti-risk US Dollar.

To learn more about Brexit, check out our interactive timeline here.

The ECB will also be publishing its March meeting minutes on Thursday which could reinforce or dim an already-gloomy outlook for Europe, Norway and Sweden’s largest trading partner. Changes in EU demand often have a tangible effect on Nordic currencies, and therefore warrant the attention of SEK and NOK traders.

Since October, Sweden’s economic performance has been falling short relative to economists’ expectations according to the Citi Economic Surprise Index. Despite the December rate hike – Sweden’s first in seven years – the case for a second in 2019 is weak. Rising household indebtedness and weakening global demand put into question the ability of Sweden’s economy to endure a tightening of credit conditions.

The Norges Bank, however, surprised global markets with a unexpectedly hawkish outlook. After raising rates in their March meeting, policymakers stated that another hike could come as early as June. The basis of their optimism is derived from the rise in oil prices. As a petroleum-based economy, the recovery of oil prices – after their almost 40 percent drop in the last breaths of 2018 – provided a tailwind for economic activity and gave impetus for officials to raise rates.

However, as growing concerns about a global slowdown rise, it could weigh on the cycle-sensitive commodity and impact Norway’s economy. As a result, policymakers may have to delay any intended rate hikes until economic conditions signal that the economy can withstand an environment of tightened credit.

Despite breaking the 2019 rising support, USD/SEK is making a sharp recovery. The persistence of the pair’s upward climb could be the result of increasing interest in the anti-risk Greenback as traders price in a delayed-rate hike from the Riksbank. The dovish disposition of the Fed at the last policy meeting initially weighed on the pair, but this quickly reversed as haven demand for the US Dollar amid concerns of rising global risks. 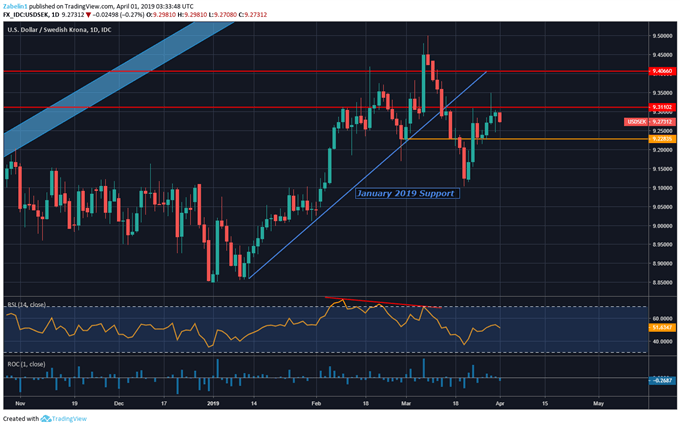 USD/NOK followed a similar pattern and broke through an upward-sloping price channel. The pair, however, is beginning to make a recovery and is signaling what looks like a bullish inclination for climbing higher. Like with USD/SEK, the rise of the pair appears to be dictated more by demand for the Greenback as market sentiment begins to sour. 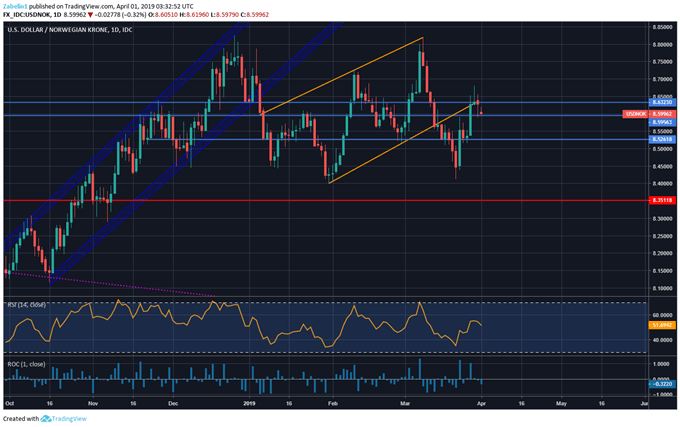