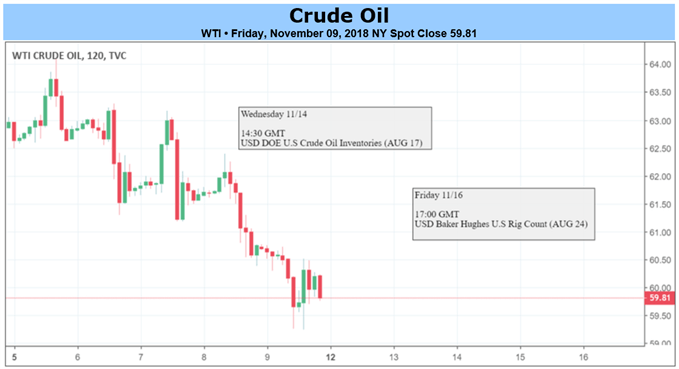 Crude oil prices were on pace for their longest losing streak on a daily basis since April 2016 at ten consecutive days. The commodity, which is generally priced in US Dollars, extended losses in the aftermath of November’s Fed rate decision which fueled the greenback, thus making oil relatively cheaper. Most of the weakness seen this past week was as a result of record 2018 US production as the country exempted eight nations from Iranian sanctions.

An eleventh day of consecutive losses may be possible in the week ahead should Friday confirm a tenth. This would mean crude oil’s longest consecutive falling spree since at least 1984 which is more than 30 years ago. On a weekly basis, a 5th one would mean its longest drop since 2015. A couple of fundamental themes could result in this but it won’t necessarily be easy.

For starters, the Federal Reserve upheld its commitment to continue policy tightening despite aggressive declines in stock markets back in October. A fourth rate hike in December seems all but inevitable. Yet, those bets are not quite yet fully priced in. Fed funds futures assign that a 74.4 percent probability which means that there is room for improvement.

This opens the door to two things. The first is an extension of US Dollar gains and technically speaking, DXY seems to be on the verge of resuming its uptrend. More gains in the greenback would likely pressure crude oil prices lower. Second, a revival in Fed rate hike bets bodes ill for the S&P 500 and global benchmark stock indexes. Speaking of, it looks to be on the verge of resuming declines.

Should market mood begin falling apart again, the sentiment-linked commodity may be pressured lower. As such, keep a close eye on how US CPI unfolds this coming week. Local economic news flow has been tending to outperform relative to economists’ expectations. This suggests that models are underpricing the health and vigor of the economy. Higher inflation risks stoking Fed rate hike bets and thus boosting USD.

Do also keep an eye out for commentary from Fed Chair Jerome Powell. On Wednesday, he and Dallas Fed President Robert Kaplan will be discussing national and global economic issues. Market mood could be soured if policymakers reiterate their commitment to raising rates in spite of selloffs in the S&P 500 and Dow Jones.

Finally, OPEC+ nations will be hosting a joint ministerial meeting in Abu Dhabi over the weekend. This past week, reports did cross the wires that the cartel will be discussing output cuts for 2019. So commentary from them, plus their October oil market report on Tuesday could slow the weakness in oil prices or even turn it around. But the prominent fundamental themes discussed poses as a risk, the outlook will have to be bearish.