The Canadian Dollar has been losing ground against the Australian Dollar for over a month, but there are a couple of fundamental and technical arguments as to why that may turnaround. In recent weeks, the drive higher in AUD/CAD seems to have been a combination of improving market mood as well as a significant drop in crude oil prices. More declines in latter could push the pair higher and poses as a risk to this argument.

Oil has been under pressure lately amidst increased output from the United States and OPEC nations. Furthermore, the US has also excluding key nations from its reinstatement of sanctions on Iran. For Canada, lower crude oil prices can adversely impact revenues given that it is a major export. Thus, CAD can at times closely follow the commodity given its possible implications for BoC monetary policy bets.

Speaking of, the Bank of Canada is much more hawkish than its Australian counterpart (the RBA). This has largely been the case this year as the BoC kept raising rates while the RBA left theirs unchanged. Now, CAD enjoys a yield advantage against AUD by 25 basis points and that spread may very well increase in the not too distant future.

In FX, the direction of where interest rates are going are arguably the most significant determent of what moves currencies will make next. Looking at the chart below, AUD/CAD tends to more closely follow the spread between Australian and Canadian government bond yields than it does with oil prices. It’s an inverse relationship with the commodity given that CAD is the counter currency. 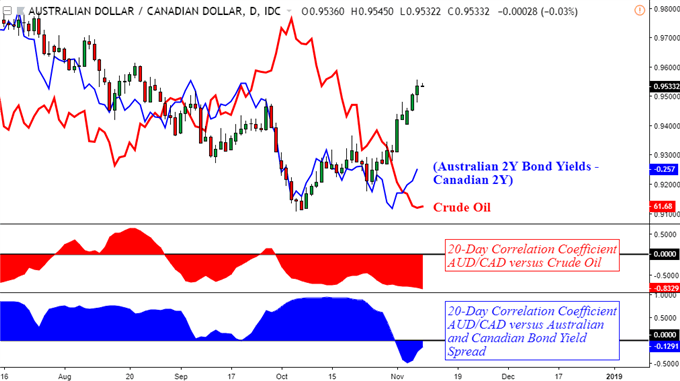 With that in mind, overnight index swaps are pricing in an 80% chance of a BoC rate hike in January 2019. In Australia, we don’t approach the same odds until towards the end of next year. This may perhaps be why we haven’t seen such a dramatic widening of the spread between Australian and Canadian front-end government bond yields.

Thus, from a monetary policy perspective, recent gains in AUD/CAD could be corrective as the dominant fundamental themes reinstates themselves. Furthermore, reports crossed the wires November 7th that OPEC countries will be discussing output cuts for 2019. Thus, oil’s scope for more weakness may now be suppressed in the interim.

From a technical perspective, this has AUD/CAD in a rather interesting position for a potential bearish reversal in the near-term. On the daily chart, multiple falling trend lines have now been broken which are bullish signals. The dominant downtrend in AUD/CAD seen since March may very well be over. But, it is now facing critical resistance barriers composing of December 2016/2017 lows and the May 2018 low (0.95548 – 0.96028). 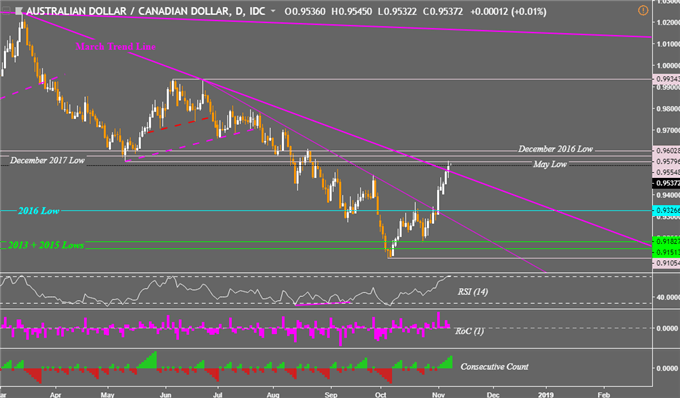 Zooming in on the 4-hour AUD/CAD chart shows that amidst its aggressive push higher, negative RSI divergence is present. This reveals that upside momentum is fading which may precede a bearish reversal if the fundamentals noted earlier sink the pair. With that in mind, it may be possible that resistance holds and we get a turn lower. This would expose near-term rising support lines which if broken, may see the dominant downtrend resume.

If these technical bearish reversal signs bear any fruit, it could open the door to an attractive AUD/CAD short perhaps targeting 0.93266 and then 0.91827. But until that is achieved (or if), I will be standing aside to watch how price action unfolds ahead. You may follow me on twitter @ddubrovskyFX for updates to this setup. 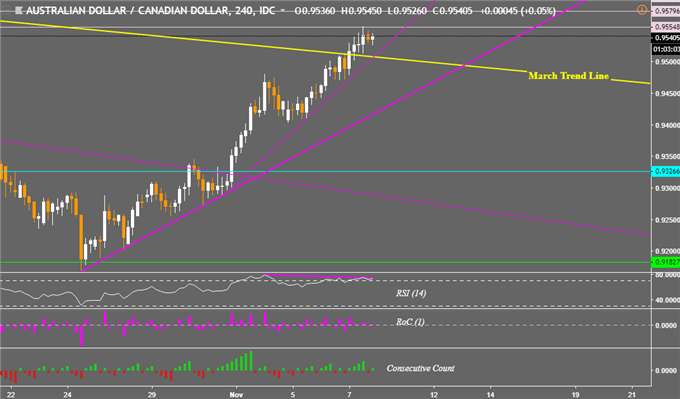