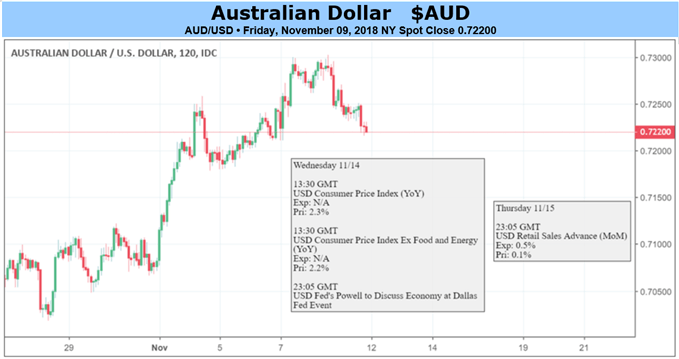 The Australian Dollar has completely lacked interest-rate support against its big US brother for most of this year.

The US Federal Reserve has raised interest rates three times and is expected to do so again in December. Meanwhile the Reserve Bank of Australia has left its own key Official Cash Rate alone at the post-crisis low of 1.5% for 27 months. That is record stasis by modern Australian standards. To make matters worse for Aussie Dollar bulls, local rate futures markets do not fully price in a rise here until early in 2020.

However, for all this the Australian Dollar has edged higher in the last ten trading days or so. What is going on here?

Well, part of the Aussie’s vigor may just be down to the paring of extreme short positions against it. Numbers from the Commodity Futures Trading Commission earlier this month showed such bets at three-year highs. For all Australian inflation’s stubborn weakness (and it’s this above all which drives prognoses of monetary torpor), this was an outsize wager against the currency of a Triple-A-rated economy still growing strongly and creating jobs at a remarkable clip. Some readjustment was surely in order.

However, the Australian Dollar’s interest-rate support prospects have picked up a little too. But just a little. The RBA said last week that its outlook for both inflation and employment meant that higher rates were likely ‘at some point.’

Moreover, according to Australian index provider ASX, futures markets do almost fully price a single, 25 basis point increase in the OCR by April 2020. Now, let us not overegg this. A tiny rate rive nearly two years distant will not make for overwhelming Australian Dollar support, not in the face of a Fed already much further down the same road.

But it does suggest that markets feel the RBA may yet raise rates this cycle- a boat they once thought it in danger of missing. Events may intervene of course, and a global downturn between now and early 2020 doesn’t look impossible. One of those may well see even this modest rate-rise forecast pared back.

Shorter-term the currency remains hostage to overall risk appetite, and that can change with one off-beat Tweet on trade policy from the White House. I

But, while Australian Dollar still hasn’t got much monetary policy support against the greenback, it has a little more than it did. On that basis it’s another neutral call this week.