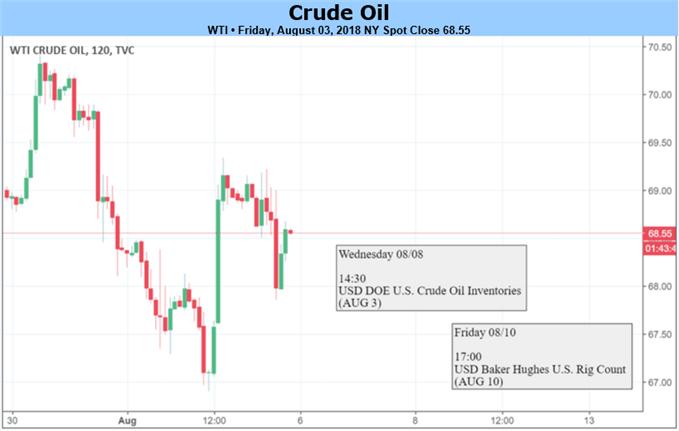 - Are you looking for longer-term analysis of Oil prices? Check out our Quarterly Forecasts as part of the DailyFX Trading Guides.

Oil prices continued to move lower this week as global markets wrestle with the prospect of increased production. In late-June, OPEC and a group of ten non-OPEC oil producing countries announced that supplies would be increased as production caps were lifted in the effort of offsetting Iranian production after US sanctions go into effect. This move also brought the potential to moderate the hefty gains that had been seen over the past year, which have nudged inflation numbers-higher across the world, even catching the ire of President Trump. In late-May, Brent crude temporarily eclipsed the $80 level, and WTI topped $75 in early-July: Both markets are now in the midst of a pullback as US inventories are piling up to go along with this backdrop of increasing global production.

All hope is not lost for Oil bulls, however, as we still have the potential for supply shocks given some of the geopolitical tensions that have flared in key producers like Venezuela or Iran, and this may be an operative reason for a hold of support this week despite the continued threat of increasing supplies.

WTI Crude Oil Daily Price Chart: Down on the Week, Hold of Support

The surprise item from this week was an unexpected build of US supplies as shown in the Wednesday release of EIA data for this week. This printed at 3.8 million barrels versus an expectation for three million, and this helped to drive WTI down to test the $67-handle again, just as we’d seen two weeks prior. Prices posed a bounce late in the Thursday session, but bulls were only able to claw back a portion of those prior losses; so at this stage we have bearish momentum combined with support level that’s held the lows for a couple of weeks. Of note – this current area of support is around the January and March swing highs; and that comes in around the 50% retracement of the 2014-2016 major move in WTI.

The backdrop for Oil is about as clear as, well, Oil, at this point. In late-June, OPEC and ten non-OPEC oil producing countries agreed to increase production by as much as 1 million barrels per day starting in August. This was designed to offset the lost production from Iran as economic sanctions go into effect next week.

But this potential increase in supply may be still faced with disruptions as geopolitical tensions tighten in Venezuela and Iran. In Iran, it was reported that the country conducted a military exercise in the Strait of Hormuz on Thursday. The Strait of Hormuz has been called ‘The World’s Most Important Oil Artery’ as more than one-third of the world’s seaborne oil passes through this key area on the map. The military exercises were conducted to largely show Iran’s ability to disrupt the flow of the global oil trade, and this is a way that the country could continue to impact prices despite the heightened sanctions that are due to go into effect soon.

In Venezuela, the economic meltdown continues. Venezuela’s Oil production continued to hold at beleaguered levels in June that are around 60-65% of last year’s production figures. This likely continued through July as oil fields were shut down and workers fled. Some estimates peg a production dip from the country by as much as 1 million barrels/day by the end of 2018. Other estimates (from the IMF) suggest that inflation could surge to as high as one million percent by the end of the year, putting the country deeper into a tailspin that makes day-to-day operation of running an oil extraction business a daunting task.

So, there is adequate reason for support to hold here, as the supply increases that we’re all expecting could quickly be offset by the surge in geopolitical tensions in these very key Oil producing countries.

The forecast for next week will be held at neutral.