OPEC’s 174th ordinary meeting takes place today, while OPEC/non-OPEC ministers are due to meet on the 23rd. Expectations are for a relaxing of the current oil supply quota’s, which has been increasingly suggested by oil kingpins Saudi Arabia and Russia that the supply switch has been turned on.

Both Saudi Arabia and Russia look to maintain market stability amid possible supply shocks from rapidly declining production from Venezuela and potential production losses from Iran (following US withdrawal from nuclear deal), while demand growth remains robust as evidenced by reports from the EIA, IEA and OPEC. Additionally, compliance among OPEC members is over 160%, largely due to declining Venezuelan production. 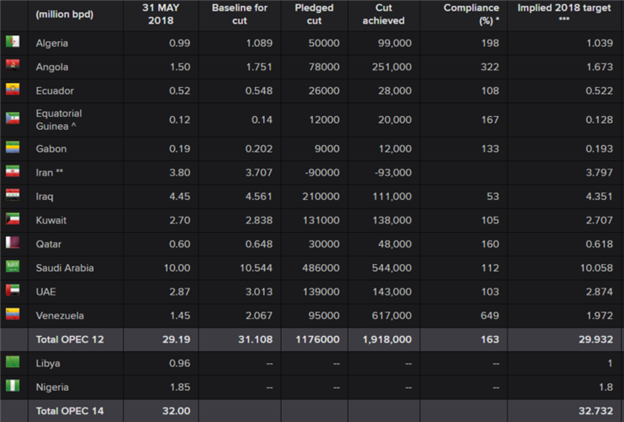 1.5-1.8mln bpd: Russia have proposed that OPEC/Non-OPEC oil output should be boosted by anywhere from 1.5-1.8mln bpd in Q3, given that the market is effectively balanced, while demand remains high, suggesting that increased oil could be absorb. If this is agreed then oil prices will likely come under renewed selling pressure eyeing $70/bbl, given that this is towards the high end of expectations. However, the likelihood of this proposal being agreed is relatively low.

1mln bpd: Recent reports from Saudi Arabia suggest that a combined 1mln bpd output increase is a good target to work with and also the most likely scenario. Additionally, a supply boost of 1mln bpd would likely lead to an actual increase of around two thirds of Saudi Arabia’s target.

300-600k bpd: Source reports this earlier week noted that OPEC were to discuss an oil output increase of 300-600k bpd. In reaction to this Brent crude futures rose, given that markets have largely priced this in, while this is around the lower end of expectations. Additionally, the IEA forecast Venezuelan and Iran supply is to drop by 1.5mln bpd, which would imply that an output increase of this size may have a limited effect. As such, risks are skewed to the upside if this were to be confirmed by OPEC and Non-OPEC.