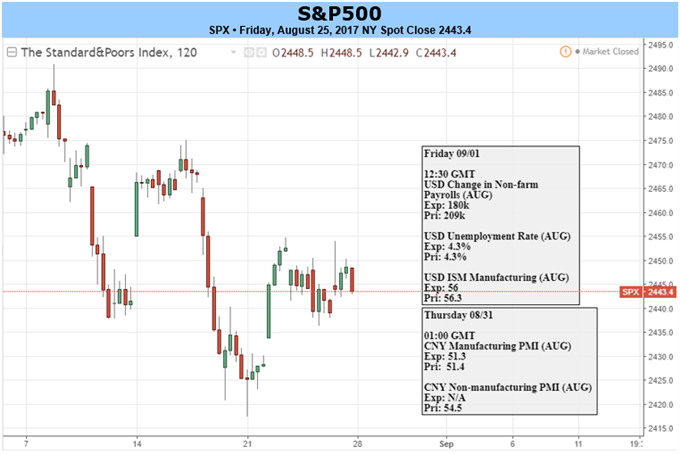 The big event to end last week was Fed Chairwoman Janet Yellen speaking in Jackson Hole, and in terms of giving rise to market volatility we saw a modest uptick. Next week brings a fair amount of ‘high’ impact data, with Advance Goods Trade Balance on Monday, Consumer Confidence on Tuesday, 2Q GDP on Wednesday, Core PCE on Thursday, and then the most highly anticipated release of the week comes on Friday with the August jobs report, along with a likely overshadowed ISM Manufacturing report. Market consensus is for the U.S. economy to have added 180k jobs during the month, edging down from 209k in July. For release times and other data, see the economic calendar.

Turning to the charts, the S&P 500, as discussed on Friday, remains in a state of limbo as it works its way lower. So far, the 3-down, 2-up sequence suggests buyers are still around on weakness and that at some point the market could gain traction. The key level to watch on the top side is 2454, its influence is growing and remains problematic for the market in gaining upside momentum. A break lower could see the S&P drop towards 2405, but as long as that holds and we see a quick rebound then the price sequence could take on the shape of maturing bull-flag. It would take a sharp break and failure to rebound before our outlook would become outright bearish. 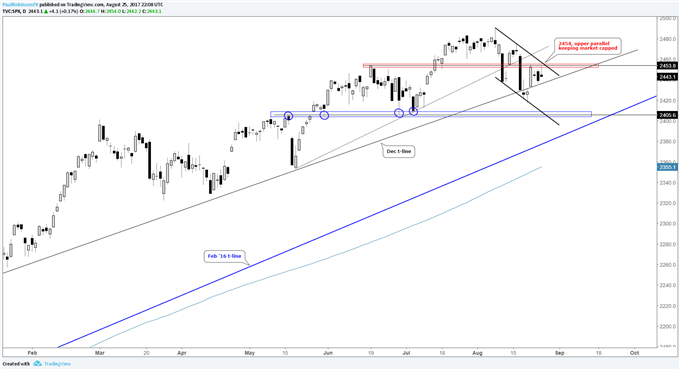 What is driving global stock markets this quarter? Check out our Q3 Forecasts.

ECB President Mario Draghi spoke late on Friday and gave a further boost to the euro after the Fed’s Janet Yellen propelled it higher earlier in the day. More euro strength could come to weigh on the DAX as the week begins. Looking to data releases, on Wednesday we have German CPI followed by German Employment figures and Eurozone CPI on Thursday, and to conclude the week the U.S. jobs report on Friday.

Last week saw the DAX continue to chop sideways, bringing a triangle into play within the context of a triggered H&S formation. At this time, it is viewed as a likely continuation-style pattern, especially given stiff resistance surrounding 12300. As long as the market stays below this key area a neutral at best, bearish outlook will remain intact. On a breakdown from the coiling pattern we will look to the 200-day at 11996, followed by 11935, 11850, and then the measured move target of the H&S formation set at approximately 11600. On a hard break, though, the next ‘true’ price level doesn’t arrive until 11484. If the DAX can break on through 12340, then we’ll be forced to shelve a bearish bias in favor of higher prices. 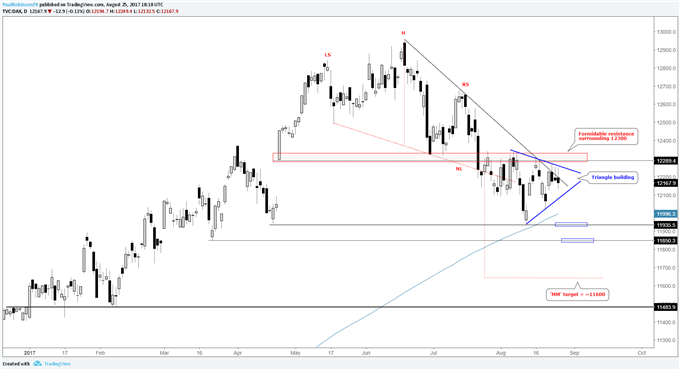 Looking at the economic calendar, there isn’t any notable ‘high’ impact data coming out of the U.K. in the week ahead, with some lesser data peppered throughout. Watch general risk-trends for cues as to where the market could head in the next week once it re-opens on Tuesday after observance of the Spring Bank Holiday on Monday.

From a technical perspective, the week before last the FTSE closed right near the 7300-mark, but managed to bounce substantially last week. It’s an important level marking support back to late-June and in approximate confluence with the February 2016 trend-line. The 7300 level also constitutes the neckline of a possible double-top formation. As long as the market continues to stay above then it will remain short-term directionless between roughly 7300 and 7550. A break below noted support, though, will mark a drop below both key support and the 2016 trend-line, and likely lead to a decline to big support around 7100. On the top-side, 7445 is the first level of modest resistance and just beyond there the underside of the December trend-line. A climb above both thresholds is needed if the 7550-area is to be seen. Friday’s reversal-bar hints at weakness before strength even if the market is to rally later-on. 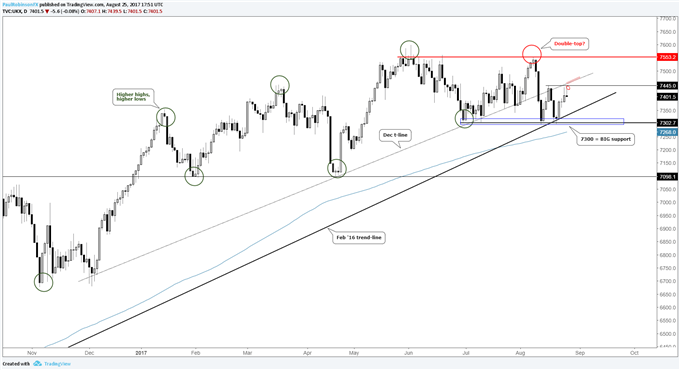 Join Paul on Tuesday for a discussion on global indices & commodities, for details please see the Webinar Calendar.