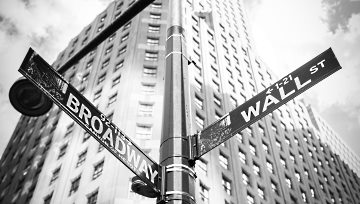 Check out our new beginner’s guide – Building Confidence in Trading

Heading into the new week this is what we had to say about the decline in the S&P 500 to end last week, “The drop left the market closing the week just a shade under the trend-line running higher since December. How the market responds early in the week could be important for how events unfold for the remainder of the week. “

On Monday morning we saw more weakness just below the December trend-line into the lower parallel tied to the top-side trend-line off the 8/8 reversal-day high, but it was short-lived and the market responded from there through Tuesday with a strong rebound. While the bullish response may have not set the tone for the week, necessarily, it did keep the market from taking a dive lower when the technicals suggested it was certainly a possibility.

The market is caught in a sort of ‘limbo’ – it’s neither truly bear nor bull at this juncture. Is the move off the monthly (record) high a correction resembling a steep bull-flag formation, or the beginning of a trend lower marked by lower lows and lower highs which will eventually lead to an outright decline?

The December trend-line could be breached again, leading to a move towards 2405 (a pretty big spot also near the Feb ’16 trend-line), but won’t necessarily be an outright bearish occurrence – especially if it does so in the same 3 steps down, 2 up sequence as we’ve been seeing. That type of price action shows buying interest by market participants is still present. A recapture of the ~2454 resistance area and the top-side trend-line of the developing downward channel would be a mild positive, but not necessarily providing a strong bullish signal.

Find out what’s driving stocks this quarter in our Q3 Report. 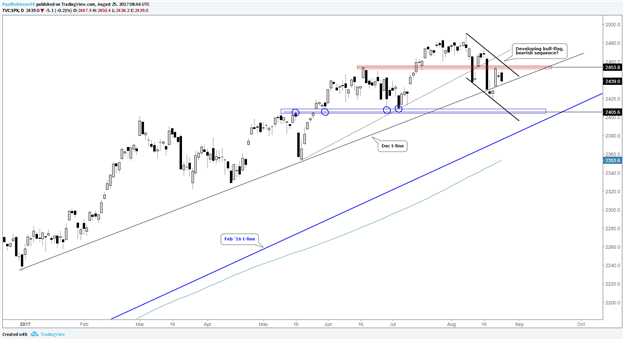 So, what’s the bottom line? We’re at somewhat of a technical impasse here. Neither side of the market is garnering much excitement at the moment, and on that we’ll wait until further clarity.

Heads up: The ECB’s Draghi, and more importantly the Fed’s Yellen are set to give speeches today at the economic symposium in Jackson Hole. It’s unclear how much volatility their words will bring, but short-term traders need to be on their toes as risk of price-swings will be heightened. Yellen kicks off at 14:00 GMT time, Draghi later in the day at 19:00.