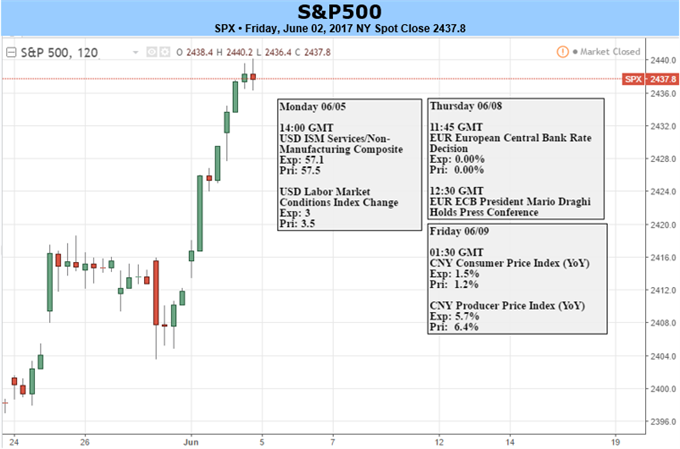 On Friday, the U.S. jobs report showed 138k jobs were added during the month of May, missing the +182k analysts were expecting. The initial knee-jerk reaction to the headline figure was lower during pre-market futures trading, but buyers showed up on the dip pushing the market higher throughout most of the cash session. Per the CME FedWatch Tool, probabilities for a hike at the June 14 meeting were hardly dented, showing a nearly 89% likelihood the Fed raises rates by another 25 bps. Looking ahead to next week, the economic calendar is light on U.S. data, with the only ‘high’ impact data event slated for Monday when May ISM Services/Non-Manufacturing figures will be released. Thursday’s ECB meeting may ignite volatility in markets (See DAX below.)

The S&P closed last week at yet another record high. It’s difficult at this juncture to buy into momentum, making buying on dips the favored approach. There is little for the shorts to hang their hats on at this time, but a top-side trend-line dating back to the Feb 2015 high crossing over the March 1 peak may present a near-term challenge. The market closed right around it on Friday. However, given the spacing between the two inflection points we want to see a solid reaction to this line before giving it weight as an obstacle worth consideration; that reaction would need to come immediately.

Check out our market forecast to find out what's driving global equities this quarter.

The headline event in the week ahead will be the ECB on Thursday. While no changes to current monetary policy are expected, Draghi and Co. may offer signaling to the end of its QE program by year-end. German-specific data is lacking in terms of ‘high’ impact, with other ‘medium’ impact releases likely to take a backseat in light of the ECB. For the full docket of events, check out the economic calendar.

Last week, we saw rather ‘ho-hum’ trading up until Friday’s 1.25% surge to a new record high. The DAX will look to keep on moving higher in the week ahead, but faces a test of an important trend-line running overhead since February; it has several inflection points, with it last used as support before breaking last month. It will arrive quickly at just over 12900, and how the market handles resistance could be telling. Overall, it’s hard to be anything but constructive until we see invasive price action suggest otherwise. The picture won’t turn neutral to bearish unless we see a reversal of Friday’s gains. 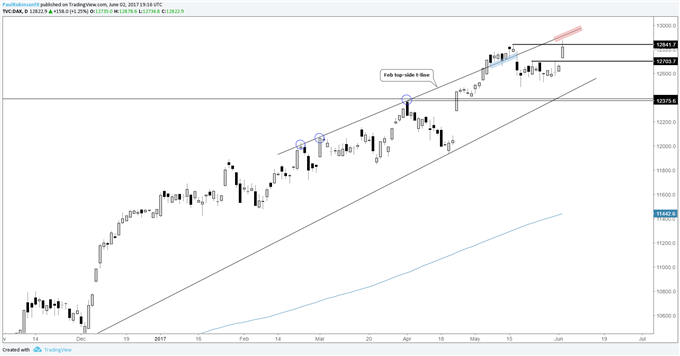 There aren’t any major data releases this coming week, with only ‘medium’ impact data scheduled throughout the week. Don’t look for these releases to have a significant impact on the Nikkei. A key driver for the Nikkei is likely to be risk trends, which have been quite strong for much of the world.

The Nikkei was finally able to climb over the 20k mark for the first time since December 2015. It was a fairly important breakout given the lack of resistance the index has in front of it until the 2015 high at 20953. This market hasn’t been the easiest to get a handle on, lagging relative to other major global indices, but with a strong finish last week momentum may kick in and carry the Nikkei higher with less drag than we’ve seen for much of the year. A pullback early this coming week to old resistance turned support around 20k could offer an attractive risk/reward opportunity to join the push higher. While a dip below price support would not be desirable if we are to see higher prices, the trend-line off the April low could help make it only a short-lived event. A decline below both instances of support would turn the picture neutral to bearish.