On Wednesday, the sentiment we expressed regarding the DAX was one of patience, waiting for the range since mid-May to break – one way or another. The gap this morning came swiftly above recent resistance in the low 12700s; buying interest off the open was strong with about 70 points worth of gains added in the first twenty minutes.

General appetite for stocks is healthy.

Leading into the strong European showing this morning was Asia popping overnight, with the Nikkei tacking on 1.6% to finish out above the 20k psychological level and to its highest level since August 2015. Leading into that was a nice-sized rally in the U.S. yesterday, where the S&P 500 tacked on 76 bps of its own to close at yet another new record high.

As long as the DAX can hold onto most of its gains from here through the end of the session, or even better yet, add to them, then it stands to continue forging on to new highs. But if it does the market will be in for a quick test of an influential line with its origins dating back to February. There are several inflection points, and most recently it acted as support in May. So even if the DAX breaks to a new high above 12842 it will have to muscle through the top-side slope in order to gain further traction.

Heads up: Later today, the US jobs report is due out at 12:30 GMT. Non-farm payrolls are expected to print 180k for May, while the unemployment rate remains unchanged at 4.4%. Whether this report will be a market-mover will depend on how large of a deviation from expectations we see. Even then, as often times is the case with data releases, the brunt of impact is likely to be felt more in FX/rates/precious metals. In any case, traders need to be prepared. See the economic calendar for release details. 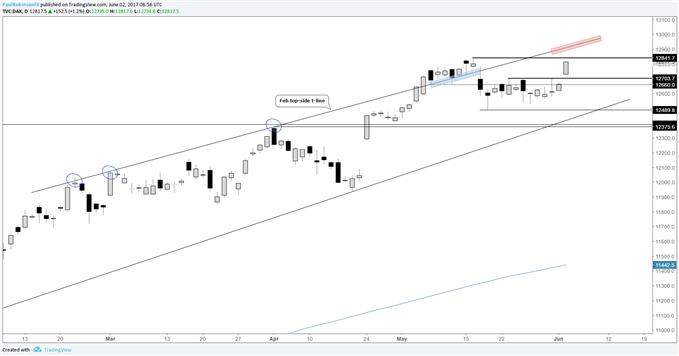