The Three Keys of Day-Trading

In our last article, How to Trade Short-Term (Day-Trade), we shared with traders a strategy that can be used to look for momentum-based trades in short-term situations.

I received a lot of questions and comments on that article. So many that we held a webinar this morning to show how to use the strategy in a dynamic environment (during the ECB press conference), and a really valuable lesson was made available. We’ll get to that in the third key, but before that we’re going to discuss a few other important vantage points for short-term day traders.

1. Have your strategy (and plan) set before ever placing a trade

Do you already have a trading plan with your strategy written out? If you don’t, you should. While it may sound overly-detailed, or pedantic; the simple act of just knowing how you want to approach a market can have a massive impact on your overall approach.

Discipline is a necessary trait for any discretionary trader, and perhaps even more important for a short-term trader: But if you don’t know what you should do or how you should do it – how can you expect to have long-term success?

That’s where the trading plan comes in. This is like the trader’s ‘constitution’ as to how they’re going to operate and speculate in a market. This way, anytime a trader begins their operations for a day they already know how they want to attack the market, and they don’t have to make up a brand-new game plan every single morning.

If you want an example of a simple trading plan, we discussed that in the article How to Build a Four-Point Trading Plan; and if you’d like to go more in-depth, we covered that in The Trader’s Plan.

Various trader types, and example strategies for each

Taken from How to Build a Four-Point Trading Plan

2. Be selective – Trading is not entertainment

A key benefit of having the trading plan written out is that the strategy or mannerism for placing trades is already decided upon, and the trader simply has to look to execute as their strategy dictates.

If a trader takes a position that doesn’t fall within the plan or the strategy, well they know that it’s their fault for not following the plan. It’s an unfortunate truth, but in many cases the only way discipline can truly be learned is by seeing and feeling the ramifications of being undisciplined; and in trading, that amounts to losing money.

If you don’t feel that your trading plan is strong enough then change it; make it better. And if you need to build more confidence behind the strategy or strategies contained within the plan, do some testing until you get that confidence. With the availability and cost of demo accounts (free) – there is no excuse not to.

To speed things up, you can go through simulation with historical data to see how the strategy would’ve fared in the past. We discuss this process of ‘manual back-testing’ in the article, ‘Practicing the Art of Trading.’ That will allow you to get numerous simulations in a short period of time.

After that, you can take the strategy to a live demo environment… and once confident there; you can employ live capital behind the strategy that you know you want to be using in the quest for profitability.

I know that many traders, particularly new traders want to eschew this testing and building and formulating because, well it’s not all that much fun. But trading is not supposed to be entertainment. If you want entertainment, there are movies and music and all kinds of other things in this world to enjoy. Trading is a way to make (or lose) money.

Surely, there’s an emotional response that human beings get when placing trades… the potential to make or lose money brings on the excitement or thrill of ‘the chase.’

But losing money isn’t fun… making money is. Losing money is painful, costly, and psychologically-defeating. Over a long enough period of losing, most people will eventually abandon their efforts and look for greener pastures elsewhere (by quitting trading and giving up on their goals). And it’s all because that trader couldn’t control themselves enough to stick to their own plan.

Give yourself the best chances of success by choosing high-probability strategies that you’re confident in so that you can simply follow your own plan as opposed to ‘waking up in a new world every morning.’

One of the biggest misconceptions about trading is that winning percentages are the largest determinant of success. If you look at most other venues in modern-day society, winning is the only thing that matters.

This was listed as The Number One Mistake that Forex Traders Make, and we explored this topic in-depth in the article, Top Trading Mistakes. In some currency pairs like GBPJPY, traders in the observed study won 2 out of 3 times (66% winning), yet they still lost money. And the reason for this is that the size of the losses was so large relative to the size of the average wins. If you want to learn more about that, please feel free to visit either of the aforementioned articles where this topic is explored in much more depth.

But many scalpers think or feel that looking for bigger rewards than risk amounts is simply impossible in the short-term; so they use wide stops and look to take ‘quick’ profits and they try to win 80 or 90% of the time. This doesn’t usually work out well. Why?

It’s because we can’t tell the future. No matter how strong your analysis, or strategy or trading plan – markets (and the future) will always be unpredictable.

Rather, trading is more about probabilities and trying to get the odds on your side, if even just by a little bit. And the shorter-term we get in our approach, the more unpredictable price action becomes. So short-term traders need to know how to lose properly, and when they do win, they have to look to maximize the potential of those scenarios. We talked about this topic in the article How to Reap Larger Rewards, in which we teach traders how to ‘scale out’ of winning positions after moving the stop on the trade to break-even.

In the example below, we see how important trade management can be. In the earlier mentioned webinar, I had taken a long EURJPY position into the European Central Bank Announcement this morning. 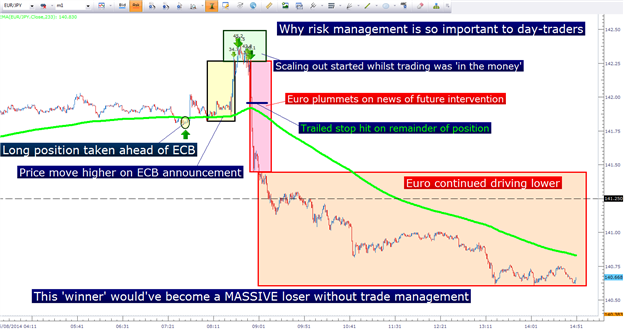 Initially, this worked out well as a lack of a movement in European interest rates saw the Euro fly higher. I used this opportunity to move my stop to break-even, and I began to ‘scale out’ of the position (closing pieces of the trade) while it was ‘in the money.’

As Mario Draghi took the stage for the ECB press conference, prices continued to surge, and I used this as an opportunity to scale out of more of the position.

But then something changed, and because I was hosting a webinar at the time I didn’t know exactly what it might be. But the Euro stopped moving higher and quickly began throttling lower.

I knew something was wrong… so I closed out the remainder of the long position at my trailed stop of +20 pips from my initial entry price. This saved me and allowed me to keep a profit on the position. And then the Euro just continued to fall.

If not for the trailed stop, and the scaling-out that I had done while my trade was ‘in the money,’ I’d be looking at a loss on this trade. But, trade management saved me.

The lesson to take from this is that markets are unpredictable, whether we have an open position or not. Greed and fear often govern our decisions, which is why having a plan is so important. But focusing on risk and trade management is what allows for a trader to plan, strategize, and strive for long-term success with a short-term approach in markets.