Forex Strategy: The US Dollar Hedge

If there is one pervasive lesson that gets taught time and time again to traders, it’s that future price movements are unpredictable.

While this may sound foreign to ears hearing it for the first time, logic and common sense dictate as such. Human beings can’t tell the future; and our job as a trader is to try to forecast future price movements. This is where analysis comes in, hopefully offering traders an advantage. And further, this is where risk management plays an even more important role, just as we saw in our Traits of Successful Traders research in which The Number One Mistake Forex Traders Make was found to be sloppy risk management.

In this article, we are going to look at a strategy to do exactly that.

What is the USD Hedge?

The USD hedge is a strategy that can be utilized in situations in which we know the US Dollar will probably see some volatility. A good example of such an environment is Non-Farm Payrolls. With The United States reporting the number of new non-farm jobs added, quick and violent moves can transpire in the US Dollar, and as traders this is something we might be able to take advantage of.

Another of these conditions is the US Advance Retail Sales Report. This is a vitally important data print that gives considerable insight into the strongest engine of the US economy; the consumer, which accounts for roughly 65% of US economic production. This number is issued on the 13th of the month (approximately 17.5 hours from the time this article is published for the August 2013 print), and fast moves may transpire shortly thereafter. 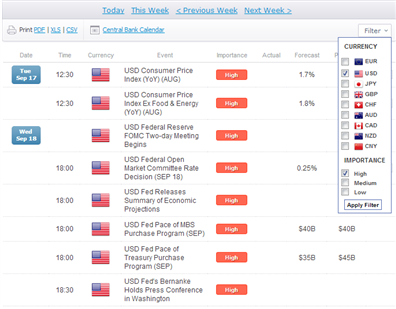 Another example is Federal Reserve meetings; with a very important meeting set to come out next week as much of the world waits to hear whether or not Fed is going to begin tapering the massive easing outlays that they’ve embarked on since the financial collapse to try to keep the global economy afloat.

In all of these situations – it is absolutely impossible to predict what is going to happen.

But once again, as a trader – it is not our job to predict. It’s our job to take the one strain of information that we know will probably happen and to build an approach around that.

In the USD hedge, we look to find opposing currency pairs to take off-setting stances in the US Dollar. So, we find one pair to buy the US Dollar; and a different pair to sell the US Dollar. This way, we offset a portion of the risk of both trades by ‘trading around the dollar.’

A note on hedging

This is disastrous, and an atrocity to the term ‘hedging.’ If you buy and sell the same pair at the same time, the only way you can truly profit is from the spread compressing (getting smaller), which means that your top-end profit potential is limited.

In actuality, it’s much more likely that spreads may spike during news announcements which could entail a loss on BOTH sides in this scenario.

This just doesn’t make sense. Because if you could time your long exit that well, then why wouldn’t you just initiate the short position there after closing the long position?

You still have to time the market in one of these ‘hedges.’ But extra risk is exposed from the fact that spreads can widen, and potentially trigger stops, margin calls, or any other number of bad events that simply aren’t worth it because there is so little upside of doing so.

The textbook definition of hedging, and this is what is taught in business schools around the world, is that a hedge is an investment that’s intended to offset potential losses or gains that may be incurred by a companion investment.

In the USD hedge strategy, that’s exactly what we’re looking to do.

What Allows the USD Hedge to Work?

Quite simply, risk management; if we’re fairly certain that we’re going to see some US Dollar movement, we can use that in our approach to hypothesize that this movement may continue.

By looking for a 1-to-2 risk-to-reward ratio or greater ($1 risked for every $2 sought), the trader can use this information to their advantage. Advantageous risk-reward ratios are an absolute necessity in the strategy and without them – the USD hedge will not work properly. We looked at this topic in depth in the article How to Identify Positive Risk-Reward Ratios with Price Action.

Risk-Reward is what allows the strategy to work properly 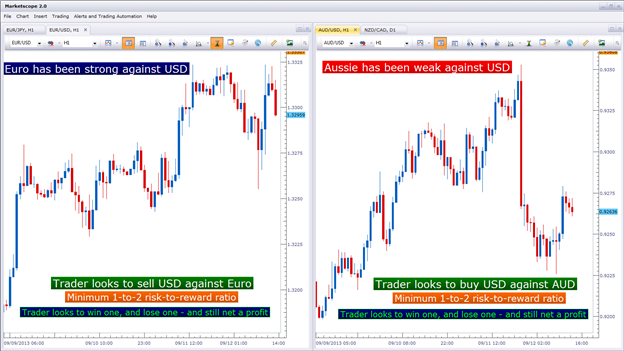 Then, when the US dollar begins its movement, the objective is for one trade to hit its stop, and the other to move to its profit target.

But because the trader is making two times the amount on the winner than they lose on the other position, they can net a profit simply by looking to utilize win-one, lose-one logic.

How to Make the Strategy Most Effective

There are numerous ways to buy or sell US dollars, and theoretically traders could look to utilize the strategy on any of them.

But to give ourselves the best chances of success, we can integrate some of the aforementioned analysis to try to make the strategy as optimal as possible.

There are quite a few ways to decide how to do this. Personally, I prefer price action. We looked at quite a few ways of doing this in The Forex Traders Guide to Price Action. Another popular, common way of doing so is by using ‘strong-weak analysis.’ Since we have the constant of the US Dollar in all observed pairs, we can simply grade currency strength by comparing relative performance to the US Dollar. In the recent article Strong & Weak, Jeremy Wagner looked at exactly that process.