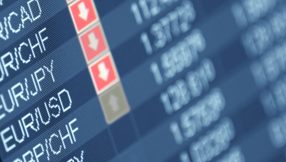 Learn Forex: How to Scale In to Positions

Article Summary: This article will teach traders to build positions through multiple entries as opposed to putting on the entire position right up front. Below we will offer a mannerism in which traders can look to increase their position size ONLY if the trade is moving in their favor.

This article is part of a two-part series on position management. For part 2 on ‘Scaling Out,’ please click HERE.

While at dinner recently with a group of analysts and traders, the topic of scaling in to positions came up, and a vigorous debate ensued. After 30 minutes of lively conversation, something became very clear: Even amongst professionals, scaling in to a trade is a hotly debated topic.

Risk management is a huge part of trading; and since one of the few factors in a trader’s control is the size of the lot that they are trading, the topic of ‘scaling in’ positions certainly warrants attention.

This article will explain what scaling in is, how to do it, and in which circumstances traders may want to look to ‘scale in’ to positions.

What is scaling in?

Scaling in is the process of entering a trade in pieces as opposed to putting the entire position on in one entry.

A trader that is looking to scale into a trade might break their total position size in to quarters, halves, or any other division that they feel might let them take a more calculated approach to putting on a trade.

Let’s say, for instance, that a trader was looking to take EURUSD up to 1.3300, but was afraid of a near-term movement against them. As opposed to putting on the entire trade right up front, the trader can look to ‘scale in’ to the position. The picture below will illustrate further:

Scaling in every 100 pips 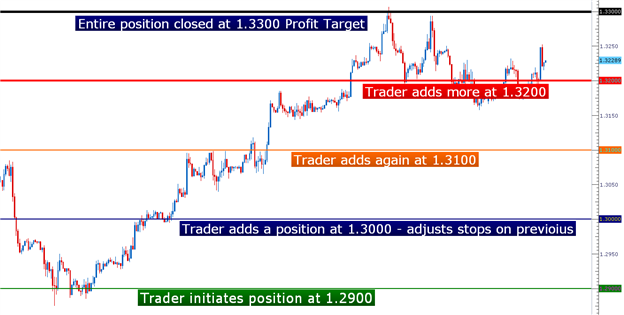 If the trader wants their total position size to be 100k, they can choose to open 25k every 100 pips that EURUSD moves up. So, our trader can open 20k to start the position when price is at 1.2900, and once moving up to 1.3000 our trader can put on another 25k. This has the added benefit of allowing the gains in the first part of the position to assist in financing the second.

In the above example, let’s assume our traders stop loss was at 1.2800 when they opened their initial EURUSD position at 1.2900. But instead of our trader scaling in, let’s assume they opened the full lot at the outset of the trade, and this time, unfortunately - the trade didn’t work for them as EURUSD ran directly to their stop at 1.2900. This means our trader takes a loss of $1,000 (100 pips X $10 per pip (100k lot)).

And the trader using a scale-in approach could have used trade management to assist in the risk management of the trade if the position moves in their favor.

Let’s say that EURUSD moved up to 1.3000 shortly after our trader entered, but then reversed moving down to 1.2800. Once again, if our trader had opened the entire position up front they are faced with a $1,000 loss. But to the trader that had scaled in, adding a second part of the lot at 1.3000 - the loss would, once again, be much smaller.

But why would the trader be required to leave their stop at 1.2900 after the pair had moved in their favor 100 pips on the initial part of the lot? Many traders will use this type of movement as an opportunity to move their stop up to break-even, in an effort to remove their initial risk on the trade.

When to scale in?

Traders often prefer to scale in when they are looking for a large move in a currency pair, but want to use a more risk-sensitive approach than putting on the entire lot right up front. The downside to scaling in is that you won’t get the entire move for the entire position.

Whereas in our above example, the trader would be able to look for 500 pips at $10 per pip, a trader scaling in would only be looking for 500 pips on the first part of the position, with the second part seeking 400 pips, the 3rd looking for 300 pips, the 4th seeking 200 pips, and the fifth and final part of the lot looking for 100 pips. But keep in mind, scaling in also allowed the trader to take on far less risk during the trade than had the entire position been initiated right up front.