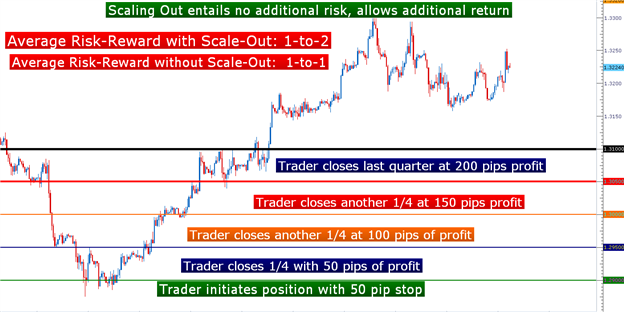 Learn Forex: How to Scale Out of Positions

Article Summary: Trading is part art, and part science – and nowhere is this art more prevalent than when it comes to closing positions. Many traders will close the entire position with one action, but scaling out can present some clear advantages to traders. Below, we will discuss those advantages and how traders can look to use them beneficially.

In our previous article, we investigated the topic of scaling in to positions.

As we discussed, the overall position size, and selection of when to ‘add’ to a position can be a very valuable tool to the trader’s risk management; as it affords the opportunity to increase trade size as the position moves in the trader’s favor.

Scaling out of positions is another manner in which traders can take greater control of their trades, and with a ‘scale out’ approach - the trader is often looking to remove pieces of the position as the trade moves further in their favor.

This article will discuss how traders scale out of positions, and when they may want to utilize this type of trade management.

Why Would Traders Scale Out of Positions?

The primary reason that traders would look to scale out of positions is greed; and to the trader's line - this can be a good thing.

Quite frankly, we never know how long a trend might continue, or how many pips might be generated from a single position. Scaling out allows the trader to observe the market, removing parts of the position as the market moves in their favor. Traders will also commonly look to utilize break-even stops when using a scale-out approach in order to remove their initial risk.

For example, let’s say that a trader is opening a trade ahead of NFP, or Non-Farm Payrolls, and is looking at entering the position with 50 pips of risk.

As a priority - they know they want to avoid The Number One Mistake that FX Traders Make, so they are looking for an absolute minimum of 50 pips on the reward side of the trade.

If they decide to use a 1-to-1 risk-to-reward ratio, the trader is likely looking at one of two outcomes: Either a 50 pip stop, or a 50 pip limit. But let’s look at this same situation from the vantage point of the trader that wants to scale out of their position: If the market moves in their direction 50 pips, they can look to ‘scale out’ of ¼ of the position, and then they can move their stop to break-even; so worst case scenario, of price reverses against them - they are out of the remaining ¾ of the trade at no gain, and no loss.

But what if the market keeps moving in their direction? This is where things get fun for the trader using a scale out approach, as our trader can essentially close additional pieces of the position as price continues to move in their favor.

The primary benefit of this type of trade management is that if the EURUSD is going to embark upon a big move, our trader can potentially capture a much larger portion of this move than if they had settled for a 50 pip limit on the trade.

Scaling out works best with trend and/or breakout market conditions.

In trending, or breakout markets - prices are moving with a bias in one direction. This increases volatility, as the faster price moves in one direction - the higher the probability of a reversal in the opposite direction. These reversals can quickly wipe out gains, which is one of the reasons that a trailing stop can be such a beneficial tool for traders using these trade management strategies.

As the market moves in the trader’s favor - they can look to close additional pieces of the position in an effort to grasp more gain than they could have initially hoped for.

Next: What You Need To Know About Your Trade Position Size Strategy (12 of 50)

Previous: How to Scale In to Positions