How to Reap Larger Rewards

Have you ever had that trade that, at least initially, looked like it was going to work out better than you had initially hoped for?

You keep your limit on the position, and comfortably walk away from the trade knowing that your analysis, your strategy, and your hard work have all paid off. It feels as if it’s as good as ‘money in the bank.’

When you come back to check on the position, counting the profits in your head you realize that something has gone terribly wrong. The trade that once looked like a sure-fire win has turned around, and ran straight to your stop-loss.

You look at your equity; dejected from this ugly and unwelcomed surprise, and it finally sinks in: This trade that once looked like it was ‘in the bank’ actually turned into a loss. And your equity stares you in the face with only a fraction of the funds that were previously there. Disappointment reigns supreme.

This is one of the most unsavory aspects of trading. Dealing with this type of dejection isn’t easy for most in a game where rejection is a common (and regular) part of reality. This is also psychological torture, and leads many to fall victim to the Top Trading Mistake.

Most rationale people will respond accordingly… and the next time they see profits on the table they take them off quicker than your or I can say ‘close.’

But is this really the best thing to do?

Is there no other way to proactively plan around this issue?

Do you think the titans of this industry, be it Paul Tudor Jones or Warren Buffett, skirmish to quickly take profits out of fear of watching a winner become a loser?

No. As a matter of fact, Mr. Buffett has a very famous quote on this very topic:

In this article, we’ll attempt to teach you how to do that.

Why Taking ‘Quick’ Profits Can be Destructive

The Top Trading Mistake is inverse risk-reward ratios, or to put it simply: Traders can lose so much more when they are wrong than they make when they are right that even winning 60 or 70% of the time produces net losses to the portfolio.

DailyFX did an extensive research study on this very topic, and this was found to be The Number One Mistake that Forex Traders Make, authored by Mr. David Rodriguez. They take very small profits, and very large losses. 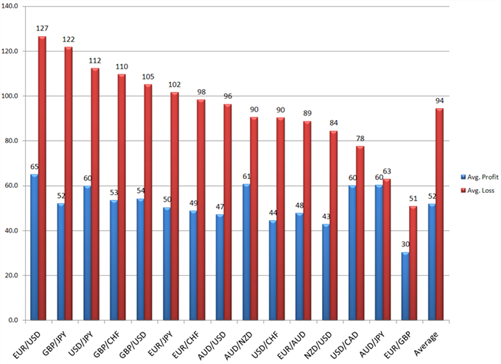 This is indicative of traders entering positions without a plan for exit. Traders initiate a position for any number of reasons, whether they be technical, fundamental, spiritual, whatever; and they hope for the best.

When that doesn’t pan out, they scurry around the trade leaving their fate up to the ability to react in just the right way at just the right time. This is often a practice in futility.

More regularly, what happens when the trade moves in their favor is that they quickly close the position out. Being fearful that this gain might turn around and become a loss, most traders get an element of fear when, as Warren Buffett points out, they should be greedy.

On the other side of the matter, if the position moves against them, they often hold on. They want to win, and this is very natural. This is a trader being greedy when, in fact, they should be fearful. Unfortunately, this story often gets uglier from here. As the position moves further against them, many traders will dig their heels in even deeper.

‘Price has always come back to XYZ level, I just need to be patient.’

Stops can keep you out of very bad positions 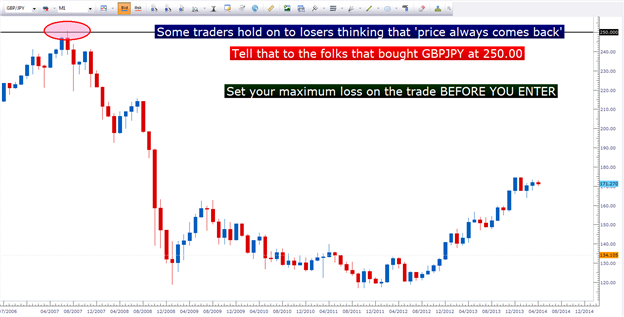 A quote from John Maynard Keynes on the matter: “The market can remain irrational far longer than you can remain solvent.”

Taking quick profits is so dangerous because these smaller profit amounts can’t offset larger losses. And because the future (and price movements are unpredictable), traders have to be prepared to lose on any individual position.

This is Where the Plan Comes In

The maximum loss a trader is willing to take should be calculated before any trade is ever triggered. Decide at what point you want to exit the trade because that idea didn’t work out. This is the first part of learning how to lose properly.

Provided that traders are using moderate-to-lower levels of leverage (which was our Top Trading Mistake #2), any one loss shouldn’t have a huge impact to a trader’s account.

Once the maximum loss is set for the position, the trader can place a stop at that level so that the trade will automatically close if that price is hit in the market. This is like packing your parachute before you go skydiving; or filling your oxygen tank before scuba diving.

The stop is what helps you stay alive in markets, and prevents one trade from taking 20 or 30% of your capital away on any one, individual idea.

After the maximum loss has been set, the trader can then start plotting the profit-side of the position. As recommended in Traits of Successful Traders, the minimum reward should be at least as large as the initial stop.

But just as Warren Buffet said, traders should be greedy when others are fearful: So, should you really take that profit just because you realized a 1-to-1 risk-to-reward ratio?

No. This is when others are fearful; fearful of failure and fearful that the position will turn around against them and run to their stop.

Save your fear for positions that lose money. When a position works in the way that you had wanted, and your hypothesis for triggering the trade is proven correct: This is the time to start being greedy.

How to ‘Have Your Cake and Eat it Too’

Traders need to realize that regardless of when they entered the trade, or how much of a profit or loss has been accumulated – future price movements are always unpredictable.

There is no ultimate ‘right’ answer as to whether any one trade should be completely closed out with profits taken off-of-the-table, or whether it should be allowed to run so that bigger profits might be obtained.

Instead, traders can utilize a series of trade management techniques to try to take advantage of either situation, and once again having a plan before triggering the trade can assist.

Traders can look to scale out of winning positions as prices move in their favor, closing a portion of the trade as prices move more aggressively in their favor. This way, traders can take some profit off-of-the-table so that in the worse-case-scenario (as we examined at the beginning of this article), they have something to show for their work.

Learning to scale-out of a position can be rather complicated, so I highly recommend trying this type of trade management on a demo account before ever using it in a live trade. Demo accounts are free, and remove the risk of financial loss. I fully realize that trading demo dollars isn’t nearly as fun as having money on the line, but trading should be about profitability; not fun. Click here to sign up for a free demo account through FXCM.

A break-even stop can also be utilized so that in the event that price reverses on the remainder of the position, a loss doesn’t wipe away the accumulated profit. 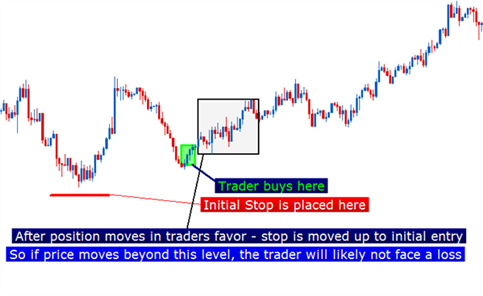 Taken from The Break-Even Stop, by James Stanley

After the break-even stop has been set, traders can begin to discount the fear losing money on the trade. Once again, this is where greed, and not fear, should guide the trader’s decisions.

As prices continue moving in the direction the trader is looking for, additional parts of the position can be closed. If prices do reverse, the break-even stop is there to take the position out at the original entry price.

Most importantly, this allows a trader to prevent fear from taking away profit potential. If the trade has more upside left, the trader is in a position to capitalize on that by scaling-out of the winning trade as prices move in their favor.

And what if price never moves in their favor? Well, that’s what the initial stop is there for. Future price movements are always unpredictable, whether we’re in the trade already or not. The best we can do as traders and as human beings is to try to get the most out of each situation without losing too much on any one idea.