How to Trade with Woodies Pivot Points

Read further to learn more about:

What are Woodies pivot points?

Woodie’s pivot points are made up of multiple key levels, calculated from past price points, in order to frame trades in a simplistic manner. The key levels include the ‘pivot’ itself, and multiple support and resistance levels (usually up to three each). Traders use these levels as a guide for future price movements when setting up trades. 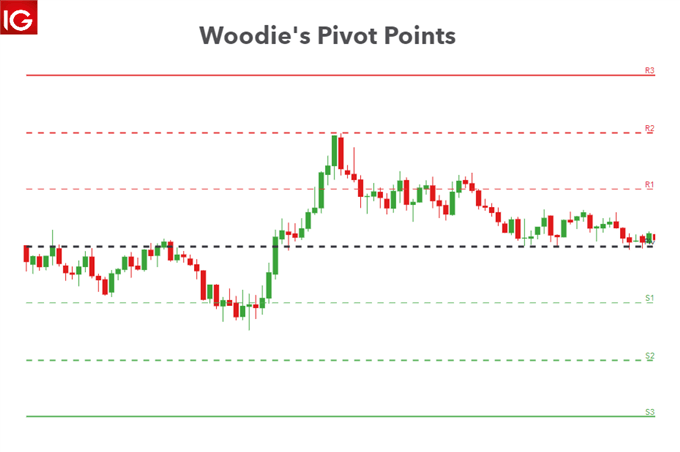 How to calculate Woodie’s pivot points

The calculation of Woodie’s pivot points may seem complex at first but is actually quite simple. Furthermore, DailyFX has a dedicated pivot points page for Woodie’s, Camarilla and floor-traded pivot points.

The calculation for Woodie’s pivot points differs from other pivots because it places a greater weighting on recent price data than other variations. It is widely believed that the high and low prices are a result of emotions in the heat of the battle, while the opening and closing prices are a more accurate representation of the mood of the market.

In essence, assigning greater weighting to recent price points makes the indicator more dynamic as it is able to process and display recent information faster.

With shorter time frames, Woodie’s pivots often create zones/ranges where price tends to trade more often than not. Traders looking to take advantage of price moving within a range will look to buy at the bottom of the range and sell at the top of the range.

In the EUR/USD chart below, there are multiple opportunities to enter short or long. For long trades, price bounces off S1 and S2 rather frequently and traders can target the pivot as a take profit level while setting stops at the next lower support level.

Similarly, for short trades, bounces off R1 and the pivot itself can be identified as entry points while targeting S1 and S2. Stops can be placed at R1 or R2 respectively.

However, since price started the day trading below the pivot, it is prudent to keep a short bias unless proven otherwise. So, while traders may take both sides of this range trading opportunity, a higher probability of success can be placed on short trades. 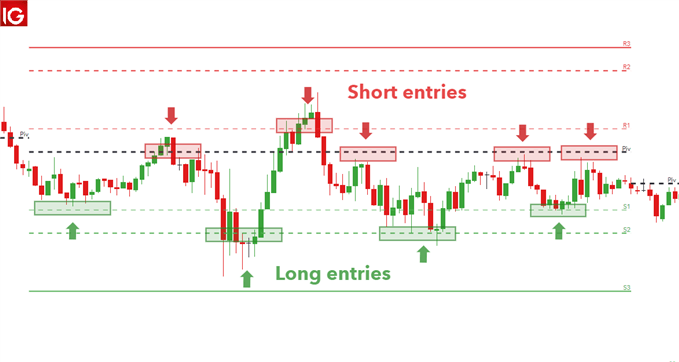 This strategy aims to latch onto a sharp, sudden move in price using key levels as support and resistance.

The GBP/NZD chart below presents such a scenario, as price breaks out of its usual trading range with increased momentum – confirmed by the green histograms on the MACD indicator.

Price had previously traded below the pivot point until the sharp move up. At this point, traders would be watching if price respects the R1 level as they could eye a short (mean-reversion) trade back down to the pivot.

After price passed through R1 with ease, traders would naturally lean away from any short bias and would start to prepare for a long trade in the event price traded above R2.

A suitable entry would be just above R2 with a conservative stop loss being placed at R1 in the event of a failed move higher. R3 presents a suitable target and ensure a positive risk to reward ratio is achieved. 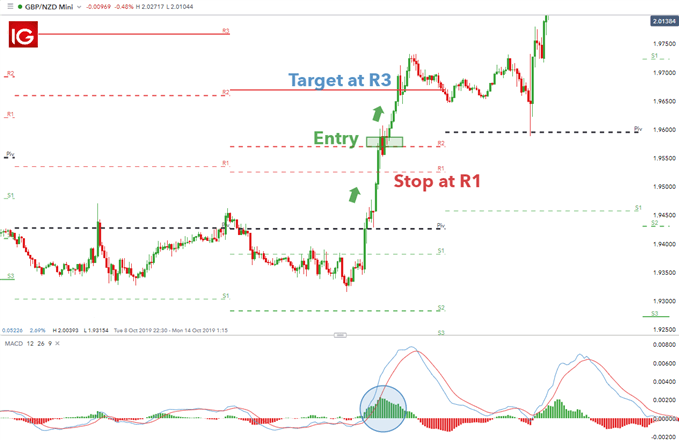 Advantages and limitations of trading with Woodies pivot points

Woodies pivot points, although based around the classical ‘Floor-Traded Pivot’, have some distinct advantages and limitations. These are tabled below: