This article will discuss the use IG Client Sentiment (IGCS) for identifying and implementing trend trading strategies.

IGCS as a Technical Indicator

IG Client Sentiment is derived from live retail trades to reflect how traders perceive the market, either as bullish (expect prices to rise) or bearish (expect prices to fall) which is then used as a forecasting tool to determine potential changes in the trend, a characteristic unique to leading indicators. This data can be useful as it may indicate when positioning is approaching extreme ends relative to the market price, a factor often ignored by retail traders who have a tendency to follow the crowd, illustrating how trading psychology may influence a traders’ ability to make well-informed investment decisions.

In the table below, IGCS values are provided for a number of currency pairs, with readings in red indicating net short positions, while readings in blue represent net-long positions. When using sentiment analysis for the purpose of identifying trends, traders who are familiar with IGCS will likely look at markets displaying a strong directional bias, with more than 60% of traders holding positions in either direction. As can be seen below, this generally results in an opposite trading signal, highlighting the contrarian nature of IGCS.

An example of this can be seen in EUR/CHF, where 75% of retail traders are holding long positions (shown in blue), displaying an extreme bullish bias which in turn, has generated a bearish signal. 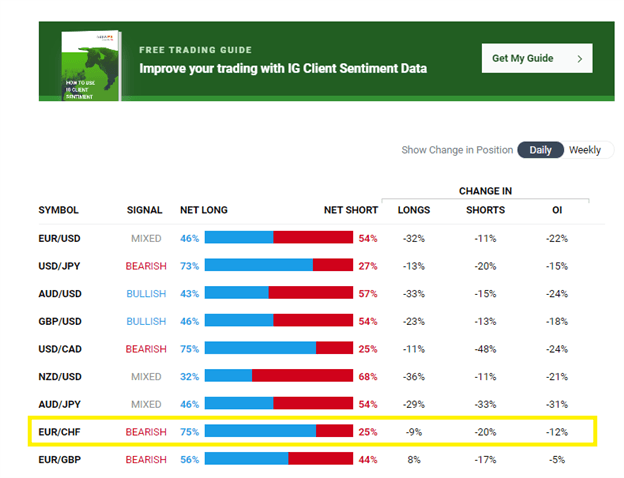 The client positioning chart further shows how these raw numbers may result in divergence between IGCS and price action. While this information is not available in the summary section, it is accessible on the sentiment report page. Once the full report is opened, the trader can scroll down to read the detailed analysis of IGCS for the desired market, including the client positioning chart. 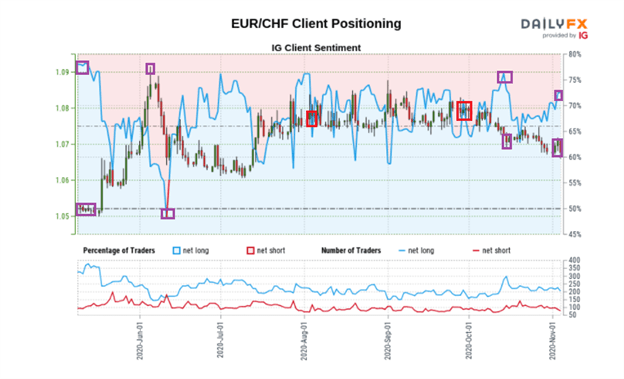 Another important factor to consider when trading on sentiment would be the daily and weekly changes in net positions, referred to as IGCS delta, which is the second method traders may use when for the purpose of identifying potential short-term signals.

By looking at the change in positioning for EUR/CHF below, the daily change in net-long positions is -9%, with a weekly change of -8%. Meanwhile, the daily change in net-short positions is -20% with a weekly change of -39%, which means that clients are further net-short relative to the previous week. When this happens, retail traders may view the rise in short positions as a signal that the market is bottoming, further increasing their long holdings while driving price action in the opposite direction. For this reason, a bearish bias has been generated for the currency pair, once again exemplifying the manner in which IGCS may act as both a contrarian and leading indicator. 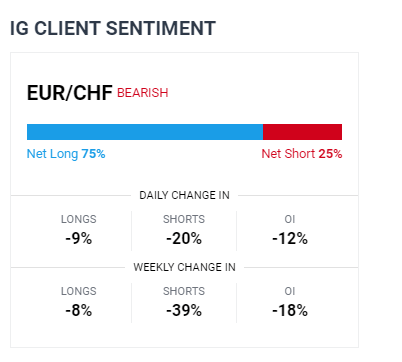 Although it is not advised to trade from sentiment or any other single indicator alone, combining IGCS with other forms of analysis, such as technical and fundamental analysis can be extremely beneficial, potentially increasing the probability of identifying hidden trends and possible turning points before they occur.

With the use of technical indicators, a trader can now use technical analysis to determine if the underlying market trend corresponds with trading signal generated by IGCS. By looking at the EUR/CHF four-hour chart, it appears that the market is in a downtrend, characterized by a series of lower highs and lower lows which can be confirmed with the use of a trendline which then acts as support. Furthermore, prices are trading below the 50 and 200 period Moving Averages (MA), with the Moving Average Convergence/Divergence (MACD) trading below the zero-line, all indicating that the bearish trend may continue. 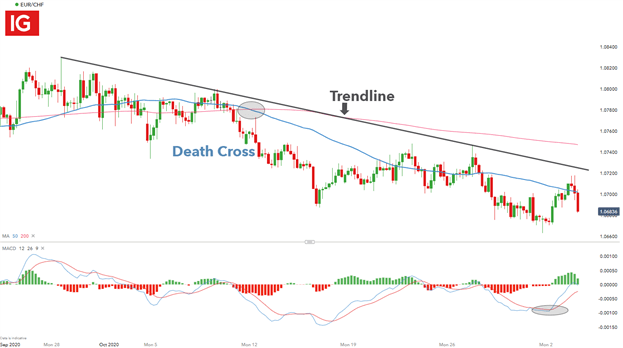 Although this article focused on identifying trends with IGCS and technical analysis, other factors may contribute to changes in price action that may not necessarily be in the opposite direction to IGCS. For this reason, it is crucial to implement risk management at all times because regardless of the strategies or indicators in the strategy – the future will always retain at least some uncertainty.