Hunting for Breakouts with Sentiment

The IG Client Sentiment (IGCS) tool helps traders identify potential breakouts in order to enter a developing trend near the start of the move. Breakouts can result in a large, extended move or simply fail to extend and fall back within the existing price range, known as ‘fakeout’. This article explores how to hunt for breakouts using the IG Client Sentiment tool.

Despite the numerous paths that price action may take, there still remains only two main market conditions:

Breakouts are simply the period of transition between these two conditions.

Ranging Markets - The Condition Before the Breakout

Ranging markets occur during a prolonged period of consolidation where price action oscillates between areas of support and resistance, as shown in the image below:

In well-established ranging markets, traders often employ a range trading strategy looking to go short at resistance and long at support. However, such a strategy is vulnerable to a breakout or breakdown where price builds momentum and breaks above or below the range, which ultimately results in a fresh trend.

The Basics of Breakouts

Breakouts require a consolidating or ranging price action that precedes the breakout. The word ‘breakout’ is often used to denote a sharp move that breaks above resistance and ultimately results in a fresh bullish uptrend; while a ‘breakdown’ refers to a sharp move lower that breaks below support, resulting in a new downtrend.

The Appeal Behind Breakouts

Breakouts are probably less common than continuations - because by nature it’s looking for something ‘new’ to happen versus the status quo. However, breakouts can be highly attractive to traders given the potential for large movements in a short period of time. Consider the bullish breakout as pent-up demand pushes through resistance and as prices make new highs, market participants identify the potential to get on the the long side of a developing trend and thus add to the newly found momentum.

In the traditional sense, IG Client Sentiment can be considered a leading indicator that is viewed with a contrarian bias when analyzing trending markets. This means that when retail traders are heavily positioned to one side (short or long), this presents an opportunity to trade in the other direction. This contrarian logic can also be applied to ranging markets.

The reason behind this stems from what seems like an inherent desire to call tops and bottoms in strong trending markets when momentum is stacked in the opposite direction.

As a trading range develops prices can bounce multiple times between support and resistance. The more often price tests these established levels, the greater the probability that a breakout/breakdown will occur because markets cannot trade within a range forever.

Therefore, traders can look out for a sizeable imbalance in client sentiment in the opposite direction to the anticipated breakout/breakdown.

Consider the FTSE chart below with the IG client positioning overlay. Price moves between support and resistance but client positioning reveals large spikes in long sentiment. This is the first clue that that a breakdown (break below support) is possible. The second clue can be observed by the prior trend – since the market made lower highs and lower lows ever since the swing high – providing a bearish bias, looking for long-term trend continuation.

After numerous tests of support price eventually broke below support as long client sentiment reached another high, around 85% of all retail trades. 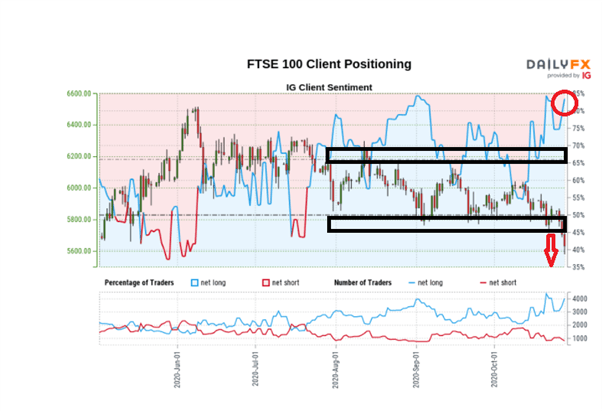 Just like breakouts pose a potential threat to ranging strategies, a market that returns back within the existing range poses a threat the breakout strategy. Therefore, the use of stop losses is central to this style of approach.

Per our Traits of Successful Traders research, traders should always implement a positive reward-risk ratio but the breakout strategy is particularly well-suited to this method of risk management. Because the breakout presents the possibility of a large movement in a short period of time, traders can look to risk a small amount in the hopes of capitalizing on the large movement should the breakout occur; and if the breakout fails or reverses – the goal of loss mitigation can then become prioritized.