IG Client Sentiment (IGCS) is an indicator that can be used to determine a directional bias as well as hidden trends in the market. Through DailyFX, clients can access IGCS for a range of markets, including forex, indices, commodities and cryptocurrencies.

This article will discuss how IG client sentiment may assist in providing short-term signals.

Short-Term Signals via the IGCS Indicator

Unlike market sentiment which shows overall positioning in a market, including positions held by institutions and large market participants, IGCS is derived from IG retail clients’ live trades, representing the percentage of traders holding long and short positions in a specific market at any point in time.

The rationale behind this is that retail investors often try to predict tops or bottoms in anticipation of a reversal or a ‘big move’, without accounting for the positions held by large market players that may be driving price action. For this reason, when trading on sentiment, IGCS is usually followed as a contrarian indicator with a directional bias, either bullish or bearish, often with prices driving in the opposite direction from the currently held retail positioning in that market. This can create divergence between the IGCS reading and price action, illustrating the effect of crowd psychology on traders.

Recommended by Tammy Da Costa
How can Client Sentiment add value to your strategy?
Get My Guide

An example of this is shown below, where client sentiment for USD/JPY is showing a strong bullish bias, with 72% of retail traders holding net-long positions, yet the trading signal generated is bearish. Likewise for USD/CAD, 81% of retail traders are holding net-long positions but once again, there is a bearish signal, highlighting bearish trend continuation potential. 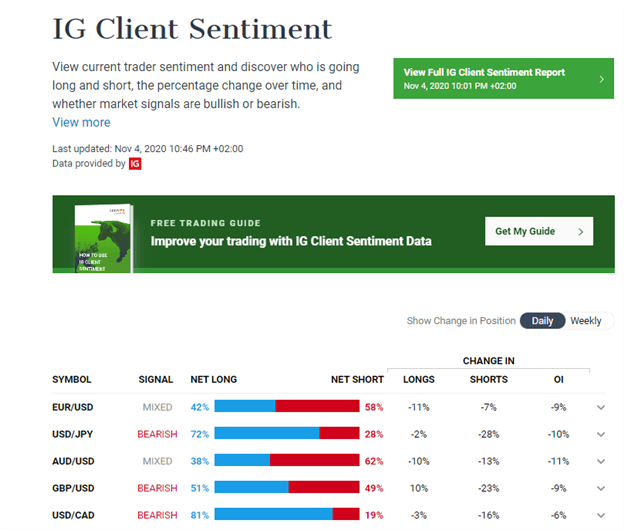 As discussed in the trading trends with IGCS article, using the raw numbers is the simplest and most common method used to determine current positioning; but another way of incorporating that data is to read signal potential with IGCS, specifically for short-term signals is by looking at the change in daily and weekly net positions, also known as IGCS delta. A detailed explanation of client positioning as well as the interpretation of IGCS delta can be found by accessing the full sentiment report.

As shown below, despite IGCS showing a strong bullish bias, with 78.16% of retail client holding long positions, the trading signal generated is still bullish, and this is due to the recent change in longs v/s shorts. While Gold may retain a strong imbalance of longs versus shorts, the fact that many shorts opened and (17.99% in a day and 14.04% in a week) many longs closed (-.99% in a day and –15.33% in a week) can keep the door open for bullish strategies.

This would be placing preference to the delta in positioning on Gold, versus the big picture reading as a whole.