There will be a dramatic swell and dive in liquidity moving forward. Over the coming week, there is a remarkably density of the highest-profile event risk that we usually find on the economic docket. And, after that run, we will feel the pull of the holiday liquidity drain as the final two weeks thin for data releases and will cater to investors’ appetite for seasonal conditions to take a break from the screens. That is the ‘probable’ course of activity moving forward, but there have certainly been deviations from that norm in history. When it comes to risk trends, I maintain that ‘fear’ is far more virulent than ‘greed’. That means that if we were to overcome the restrictions on market conditions through the end of the year (next three weeks), it would likely come with a ‘risk off’ move. Looking at it that way, the already low VIX (inverted in the chart below) would likely throttle a rally from a proxy like the S&P 500 to a catalyst like a relatively dovish Fed decision. For the index, there is a range up to the 200-day moving average and perhaps all the way up to 2022 trendline resistance around 4,070 that would represent a ‘path of least resistance’ span. Breaking above that could be hard going. Alternatively, if we end up breaking the floor of the past month’s range and the midpoint of the August to October range around 3,910; any sentiment backing of ‘fear’ could amplify market movement. 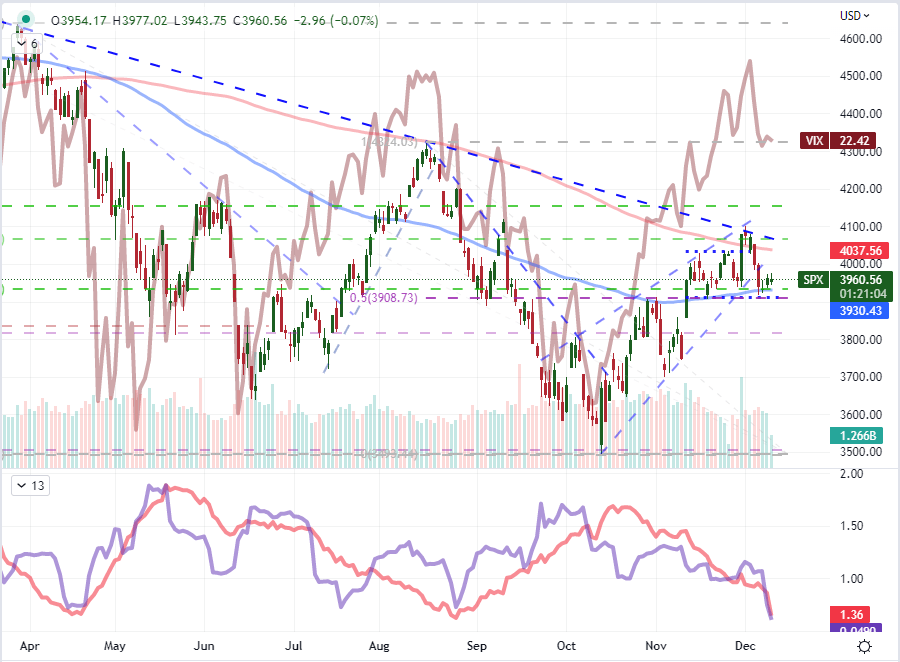 From a seasonal perspective, we are traversing December which tends to see a significant drop in volume and volatility given the end-of-year holiday conditions. That said, there is a statistical pop that is seen in the average weekly performance of the VIX specific to the 50th week of the year. This is perhaps the only stand out activity burst from the ‘fear’ index through the year averaged out since its inception back in 1900. Why would that be? One consideration is that volatility tends to decline through this period into the winter which makes counter trend punches stand out. Fundamentally, the 50th week tends to consistently hold top events like the FOMC rate decision and the last run of November and early December readings before statistical services in the West closed won for the holiday season. There is clearly a capacity for a bounce in volatility but whether or not jump can translate into persistent activity into the twilight of liquidity for 2023 depends on what trends we can tap into. 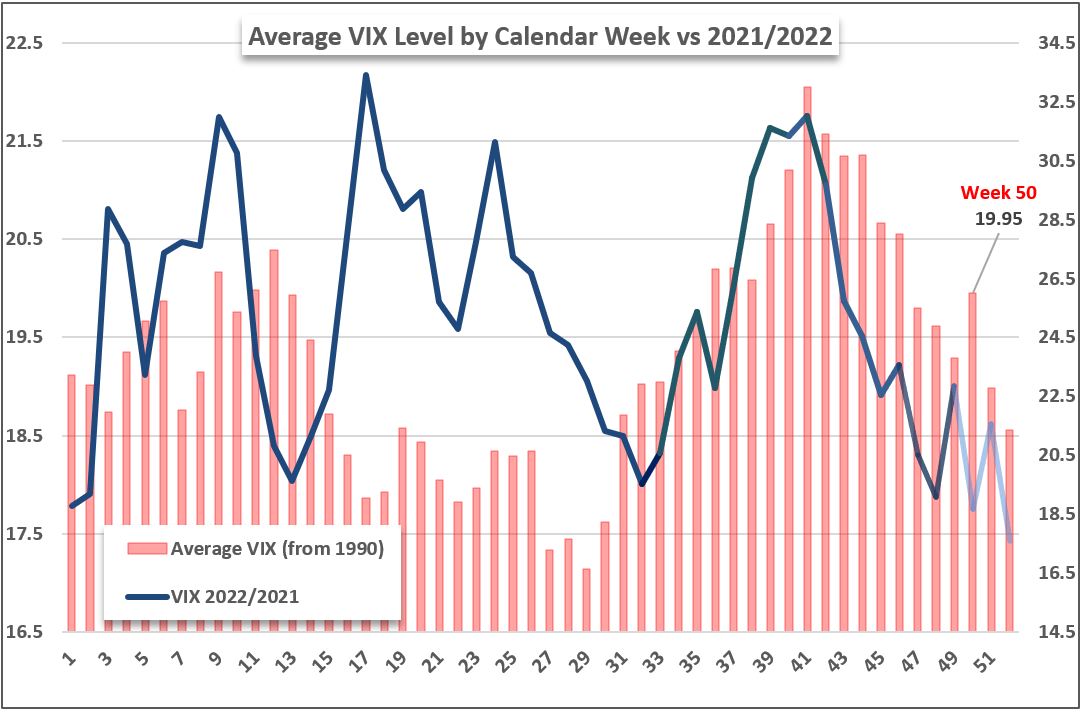 Looking at the economic docket on tap, there is a remarkably dense amount of event top market-moving events that reflect themes like monetary policy trends and recession risks as well as span major economic regions like the US and Eurozone. That breadth can lead to serious volatility and fosters the greatest potential to tap a deep fundamental current that I have seen in some time. In general, the FOMC rate decision carries the greatest potential for market influence. It is the world’s largest central bank, offering insight into the most productive fundamental theme and is seen as being at the cusp of a transition from an extreme stretch of rate tightening into a heavily disputed plateau (the markets are still speculating on rate cuts in the second half of 2023). The core component of this event for me is what the Fed offers as its official forecast for rates in 2023. While we can get some possible insight in the policy statement or Chairman Powell’s remarks half an hour after the announcement, the Summary of Economic Projections (SEP) will give us a black-and-white forecast from the group. Further, the weight of this event will likely curb the impact – at least the follow through possible – of the CPI released on Tuesday; and it will likely distort the interpretation of data that comes after such as the retail sales. 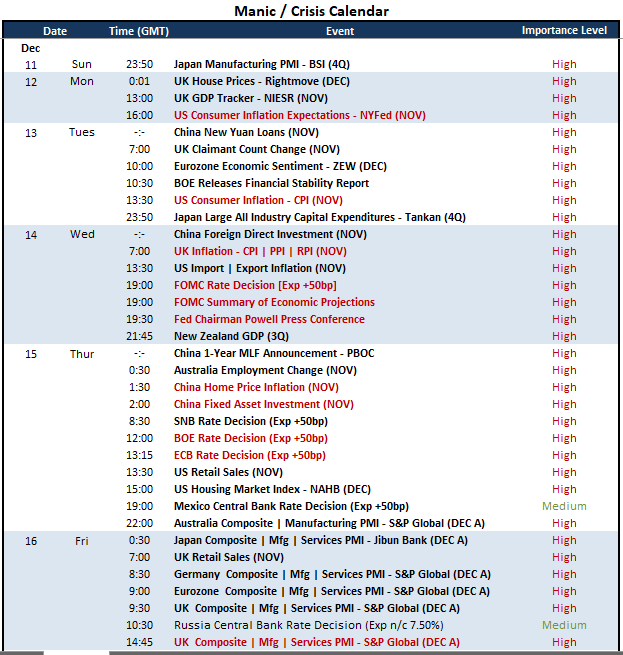 As important and potent as the US event risk is this week, it isn’t the only run of capable risk on tap. Next to the US docket, the Eurozone’s listings may be the second most important – though second place is up for debate. Next to the Fed decision, we are also expecting the European Central Bank (ECB) and Bank of England (BOE) decision on Thursday, the day following the Fed. All three are expected to hike 50bps, but that would see the ECB at a significantly lower benchmark relative to its US and UK counterparts. Nevertheless, the influence of monetary policy is more forecast than current standings. If the ECB heeds the call from the OECD to further close the rate gap with the Fed, it could added further lift to the EURUSD as it tests the 1.0600 level. A more passive influence could also be a natural deceleration in FX volatility into the end of the year considering there has been a strong inverted correlation between EURUSD and the EVZ (as seen below). 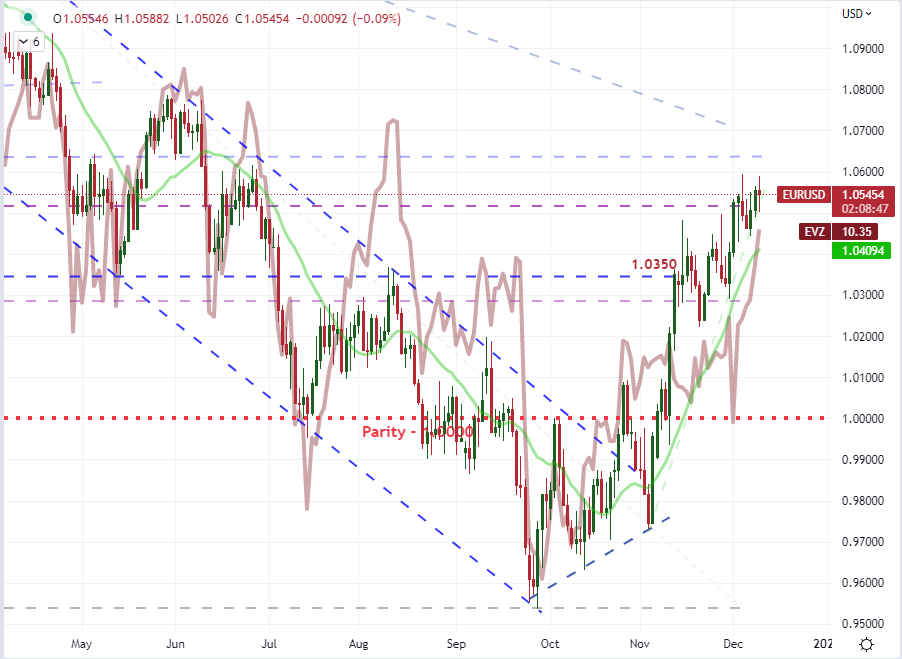 Considering how much event risk there is on the calendar ahead, it could be difficult to find a major cross that has an unencumbered (or even single focus) backdrop. Both EURUSD and GBPUSD will have to account for their respective central bank rate decisions which could amplify or offset each other. For USDJPY, there is no comparable fundamental balance and there is a greater sensitivity to the general themes of monetary policy and risk trends. For rate speculation, the focus will be on the Fed rate decision which can make for a more discrete focus. That said, the FOMC is expected to temper its pace moving forward with debate over how quickly the deceleration happens – though it is still seen decelerating which would be variable bearish pressure on this carry pair. For risk trends, it is possible to charge a short-lived risk appetite bounce; but the more productive outlier for trend would be risk aversion which would also pull USDJPY lower. These are not certain outcomes, but the convergence of potential and probability make for a more compelling short side on USDJPY relatively speaking. 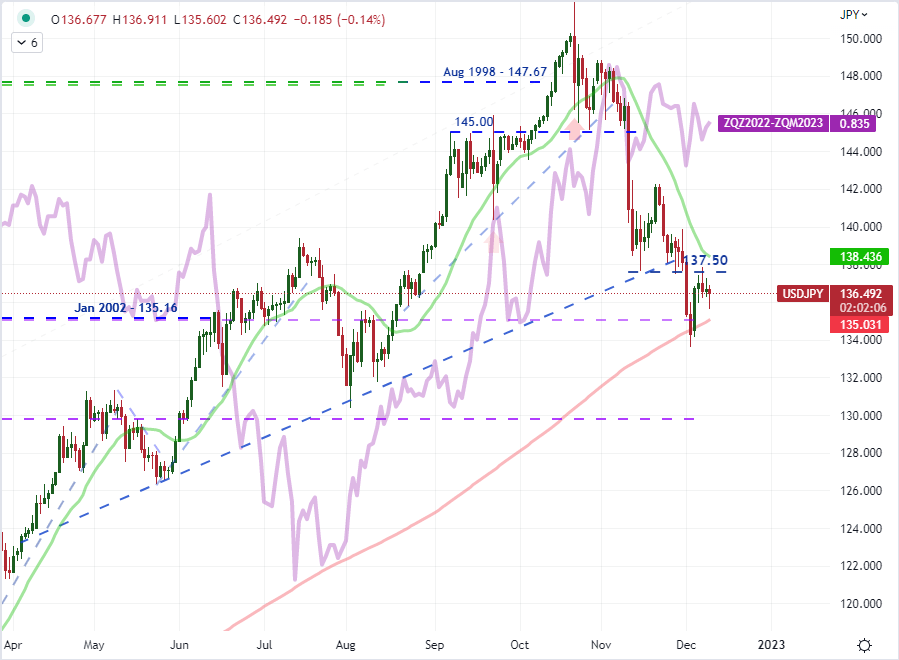