The DAX continued its move higher in European trade retesting the key 12000 level. This comes on the back of a weekend in which markets digested renewed regional energy concerns following Friday’s meeting of European energy ministers. 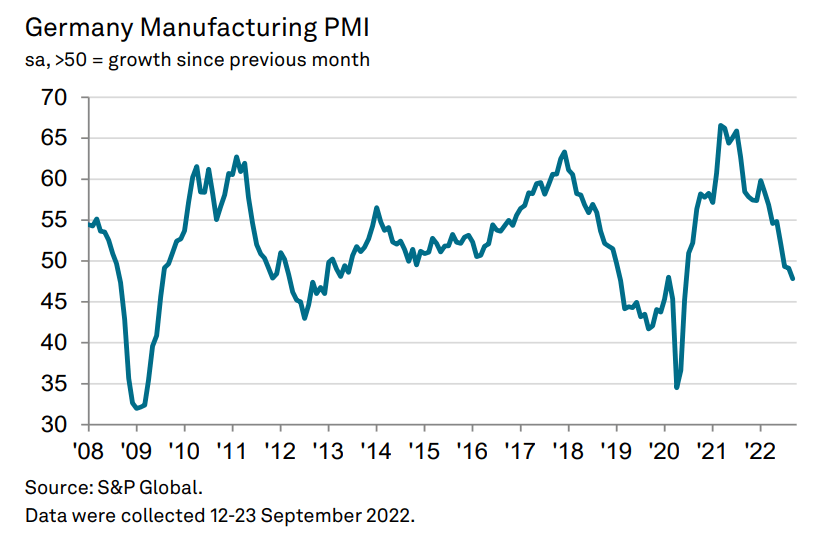 Earlier we had Eurozone and German S&P global final PMI which confirmed worsening conditions across manufacturing as Europe’s most industrialized economy saw new orders decline. The German PMI came in at a 27-month low print of 47.8 as the surge in energy prices sees costs rise. The final Eurozone Manufacturing PMI print came in at 48.4 which marks the fourth successive month of declines. Eurozone business confidence meanwhile slipped back into negative territory with manufacturers now as pessimistic as they were in May 2020.

Last Friday we heard from European Union energy ministers who stated their intention to introduce a windfall tax on the profits of energy firms. This was followed up by a draft statement earlier today in which the finance ministers are set to announce that governments cannot fully shield economies from energy price spikes. As consumers deal with a higher cost of living and alter their spending habits this will no doubt have an impact on earnings for both small and large businesses.

European markets were keeping a close eye on the developments around Credit Suisse as the banking giant was down as much as 12% in European trade. As the credit default swap levels (cost of insuring against losses) reached all-time highs, Chief Executive Officer Ulrich Koerner’s attempts to calm the market failed. Fears remain around the creditworthiness of the bank, with there being a 22% chance the bank defaults on its bonds in the next 5 years, according to CDS pricing. The banking giant is currently finalizing its turnaround plans which include the potential of reviving the First Boston brand name.

From a technical perspective, the index finally closed below the 12000 key psychological level on the weekly timeframe. The index has rallied 220-odd points since the Asian session with downside risks resting just above current prices.

The current price is some way below the 20, 50 and 100-SMA while a pullback to retest the MA’s cannot be ruled out as the RSI confirms that the index has bounced off oversold territory. Should the index see a deeper pullback, the area around 12450 remains key and could offer would-be-shorts a good risk-to-reward spot. It’s important to keep in mind the geopolitical developments coupled with the overall sentiment that could influence any move from here.