EURUSD and EURCHF In the ECB Rate Decision Crosshairs

See how retail traders are positioning in EURUSD, EURGBP and other key Euro crosses alongside a host of other liquid FX pairsusing the DailyFX speculative positioning data on the sentiment page.

The Weight of the ECB Rate Decision

Through Thursday's session, top scheduled event risk is clearly the European Central Bank's (ECB) monetary policy decision. As has been the case regularly of late, the influence from the event is founded more through the market's speculative positioning than the certainty of outcome. In fact, the world's second largest central bank is expected to leave its policy mix unchanged with the deposit rate kept at -0.4 percent and unorthodox monetary policy reserved to the targeted long-term refinancing operation (T-LTRO) program initiated a few months ago. That said, the market's speculative appetites are jumping ahead of a practical pace of measured adjustment. Swaps are pricing in a near 40 percent chance of a -10 basis point cut at this meeting and near certainty of such a move by year's end. Further talk in the open market of a return to the traditional QE program has gained explicit traction. This begs the question: how much discount is afforded to a dovish view already?

Watch the ECB rate decision and its impact on the market live with Currency Analyst Nick Cawley.

Chart of Probability of ECB Rate Decision from Swaps (Daily)

A Status Check of the Euro

In evaluating how far the market may already be leaning towards an easing move from the policy authority, a good metric is the Euro itself. We can refer to the likes of the EURUSD or EURGBP, but these divergent trends clearly signal external forces can have significant sway over the Euro crosses' ultimate performance. To get a more grounded view of the Euro itself, consider an equally-weighted index. From this perspective, the currency has slide steadily this past month to the lowest relative level in two years. Given it isn't even at the mid-point of the 2017-2018 range, there is still plenty of premium to bleed off; but short-term, the Euro looks stretched on the bearish side. 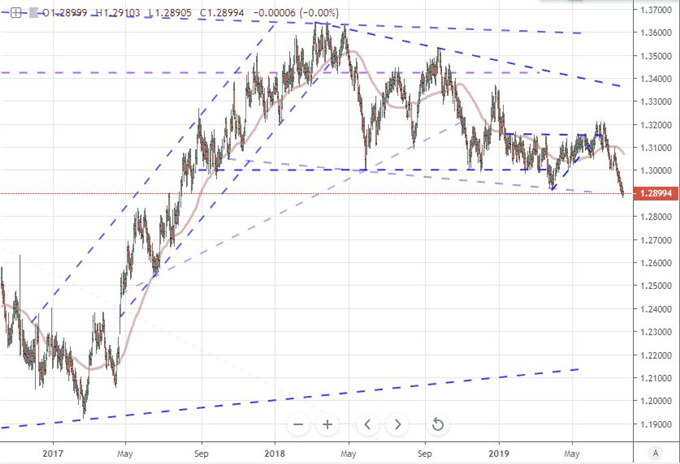 Naturally, as we consider the possible follow through of the Euro's burn in the face of a dovish drive from the ECB - a perspective seemingly shared by the outgoing President (Mario Draghi) and its income leader (Christine Lagarde) - one of the most appealing technical pictures is maintained by EURUSD. In a holding pattern just above 1.1100, the pair is stationed at a three-month low and on the cusp of a flush to a level not seen in over two years. If the ECB manages to surpass the market's already-generous dovish expectations, a break below this floor would serious implications and the contrast to the Fed - even though it is tipping dovish - would be made even more significant so as to compensate. There will still be some restraint on progress, a situation that would be even more difficult to navigate if the event risk ended up easing the burden on the Euro. Prompting a reversal for this pair would immediately come into the frame of the US 2Q GDP on Friday the serious gravity around the FOMC rate decision on Wednesday. 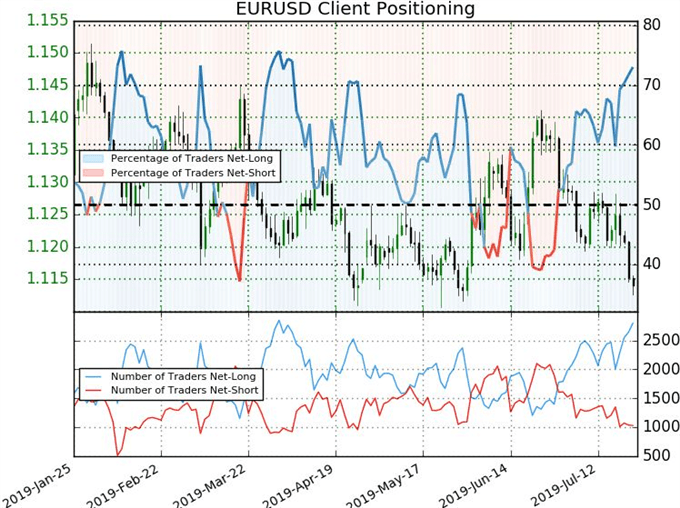 If there is a rebound for the Euro on the basis of an ECB view that suggests there is still no appetite to push deeper into uncharted dovish territory, I will look for a cross that doesn't have fundamental headwinds via the countercurrency. Scenarios for the likes of EURJPY, EURCAD and EURAUD are fairly appealing with relatively limited offset. However, my preference for a 'bullish' outcome would be EURCHF. If the Euro manages a rally because the European policy group has no intention to erode its credibility, there is independent lift that can then take advantage of cross currencies that are simply not putting up barriers. For this cross, however, the Euro-area monetary policy is the foundation for the Franc's performance. The Swiss National Bank (SNB) is essentially attempting to offset the ECB's overwhelming liquidity dump to prevent their own currency from appreciating in the wake of the Euro's slide. If the larger currency is boosted owing to policy, it is only more reassuring for the EURCHF. 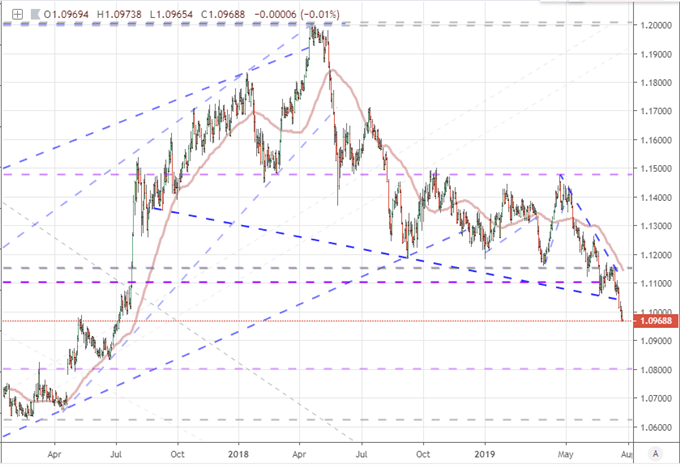