The Merits and Faults of Trading or Fading the Pound Breakout

See how retail traders are positioning in GBPUSD, EURGBP, GBPJPY as well as other FX majors, indices, gold and oil intraday using the DailyFX speculative positioning data on the sentiment page.

A Move from the Pound, Not Its Counterparts

Among the major crosses, there was a standout this past session in GBPUSD. The pair posted its strongest single-day rally since December 12 - the charge from the tentative low in the pair's prevailing bear trend over the past nine months. With this most recent extension, the Cable found itself clearing trendline resistance that stretches back to May. Furthermore, it is staring down the 200-day simple moving average which is another prominent milestone for technical traders. The pattern is hard to miss, which means technical traders are likely circling this move like speculative vultures. The question is whether there is genuine potential to be drawn from this development. To establish that, we first need to establish where the motivation originated. That starts with the question: which currency in this pair carried the greatest responsibility in the charge. Looking at the Dollar in relief - via the DXY or equally-weighted index, we find it did slip on the day; but progress was tepid and ultimately unconvincing. That comes as no surprise given how little definitive event risk crossed the wires and the burden of unresolved systemic threats (trade wars, the US government shutdown, the uncertainty of growth and whether we will actually see the GDP update). It is likely that the Dollar was playing the counterpart to more active peers this past session, which means the Pound was the genesis for the pair's performance. That is easy to verify from all its major crosses and an equally-weighted index. 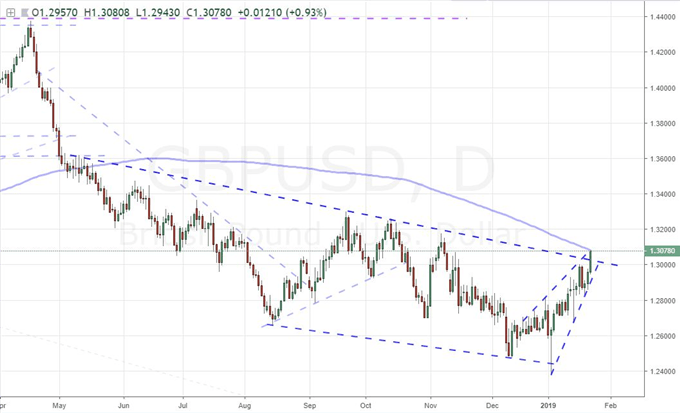 Wait, A Move from the Pound?

Now that we can reasonably attribute the day's Cable action primarily to the Pound, we need to next ask the question: why was the currency on the rise? If there is follow through to be found on this tentative move, we should expect to find a fundamental basis for which a groundswell will build to clear the next round of resistance and establish momentum. Therein lies the problem: there was little to lift the currency and limited capacity to keep it rising. The docket this past session was light with only the UK business sentiment survey from CBI offering any serious economic insight. And, that reading was a notable disappointment for economic forecast with the figure dropping to -23. The upcoming docket offers little promise of more targeted sparks. Perhaps systemic issues were more representative of the market's run? There were a few headlines of note with reports that 19 remainer ministers are strategizing a means to avoid a hard Brexit, the EU's Moscovici reiterating an out for the UK if they want to back out of the Brexit side and a BOE member (Broadbent) talking down fears of unsustainably household debt. None of this will move the needle and resolve our bearings on the UK's divorce from the EU - and that remains the primary concern. We may very well see an update on the negotiations between now and Tuesday (when Parliament is due to vote on Prime Minister May's Plan B Brexit proposal) but expecting a reliable bull trend against the backdrop of uncertainty is unrealistic and extraordinarily risky. 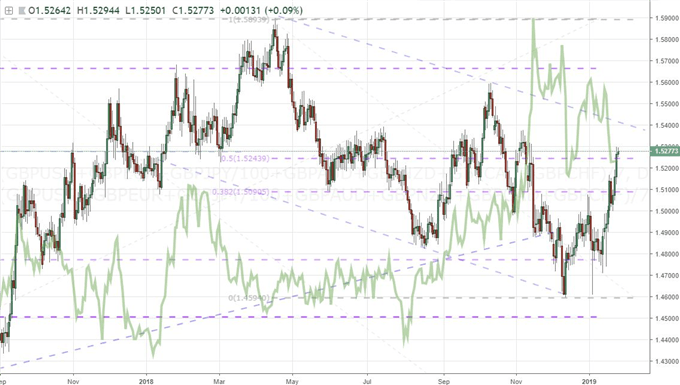 How a Trader Should View the Next Steps

So, returning to the GBPUSD picture, how does the pro/con list balance for trading with the break or against it? Expecting follow through with Brexit hanging over our head is unnecessarily risky. Concern heading into the vote can stall the move with little warning and a subsequent deterioration of conditions seems like the more probable outcome. That said, just because the case for a certain direction on an asset is not well founded does not mean that the opposite exposure is any better an opportunity. While Brexit is still on a course of steady deterioration as the clock on Article 50 winds down, that does not mean the Pound simply has to continue its steady path of depreciation. It is just as viable that the market remains uncommitted until the path of this crucial fundamental theme is decided. Unexpected bouts of volatility are a high probability, but in between the unexpected, moderation of trends is the more probable course. That said, Sterling pairs where technical boundaries are still in place and offer tentative guidance of corrections can prove more fruitful. I am partial to EURGBP which has come upon major support stretching back many months now falling at 0.8700. There is some uncertainty in the ECB rate decision due Thursday. GBPCAD has its own technical boundary at 1.7500 and lacks the external fundamental threats. We focus on the Pound's impressive and questionable move in today's Quick Take video. 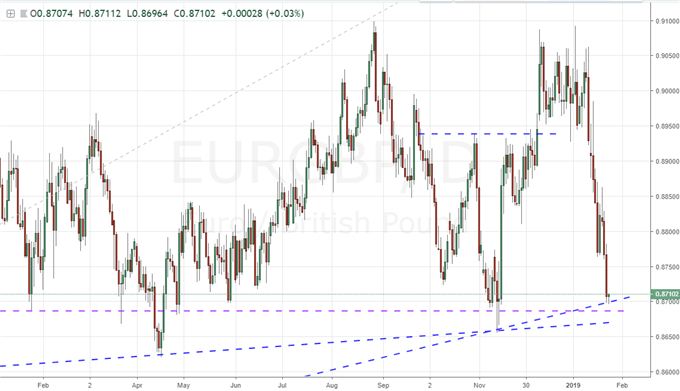 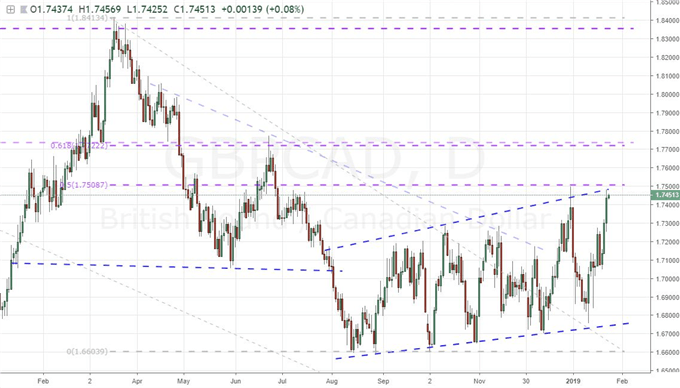